I hadn't listened to 4 minutes of TruNews and I realised they were on to something and their analysis immediately focused on the essence – something that is not surprising because they have not been following this story for the past year but Rick Wiles has been following this for the better part of 20 years.

For me their analysis is top-notch.

They well-and-truly put to bed the insane Qanon narrative of Trump being onto the pedophiles and putting them into Quantanamo but discuss the far-more likely possibiltiy that because of the short time period they have chosen, and because of who is behind this this is part of the war against Donald Trump.

Because the You Tube videos will have long disappeared I will be going through the archives to find some of the more significant coverage of the Epstein/Maxwell affair.

Listen to "Jesus Not Welcomed in Unholy Land: GOD TV Banned in Israel" on Spreaker.

Today on TRUNEWS, host and founder Rick Wiles examines the latest updates on the Jeffrey Epstein case, as Ghislaine Maxwell is arrested and indicted by the Southern District of New York. Is justice being served, or is the set up being made to take down President Donald Trump in a pedophile sting?

Later in the godcast, Rick and Doc Burkhart discuss the controversy surrounding GOD TV’s Hebrew language Shelanu channel being taken down by the Israeli government, offended by Jesus being shared in the content. They also talk about the ongoing spat among Evangelical Zionists such as Dr. Michael Brown and Laurie Cardoza-Moore regarding whether the Gospel should be preached to the Jews.


Here is some of the media articles they discuss. 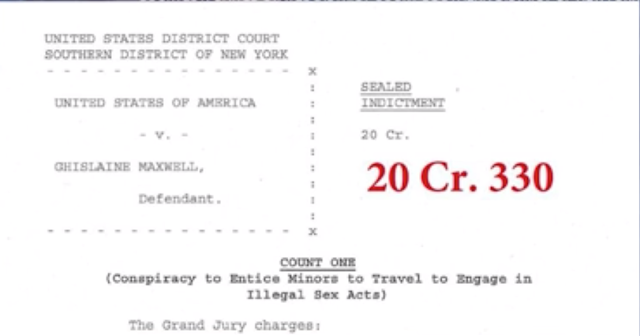 A few weeks ago the prosecutor, Geoffrey Berman, who had been onto the whole affair was forced to resign after being pressurised by AG Barr and presumably, Trump. 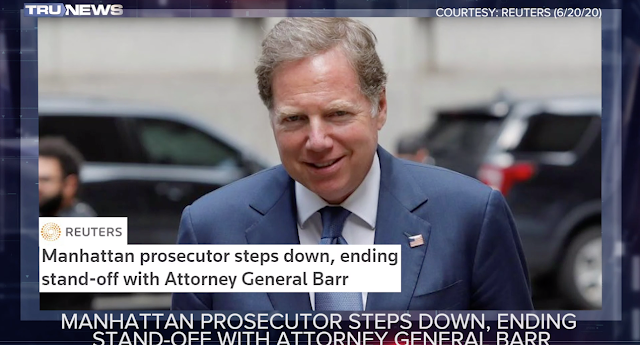 A stand-off over the independence of one of the country’s most important prosecutor’s offices ended on Saturday when Geoffrey Berman agreed to step down as U.S. Attorney for the Southern District of New York, the office that had been investigating President Donald Trump’s personal lawyer, Rudolph Giuliani.

Berman’s confirmation of his departure came after Attorney General William Barr told him he had been fired by Trump at Barr’s request, and that Berman’s hand-picked No. 2, Deputy U.S. Attorney Audrey Strauss, would become Acting U.S. Attorney until a permanent replacement is installed.


She has been replaced, on an interim basis, by Audrey Strauss, who delivered the press conference today. She is quite a heavyweight lawyer who put Trump's mentor and crook, Roy Cohn back in the day. 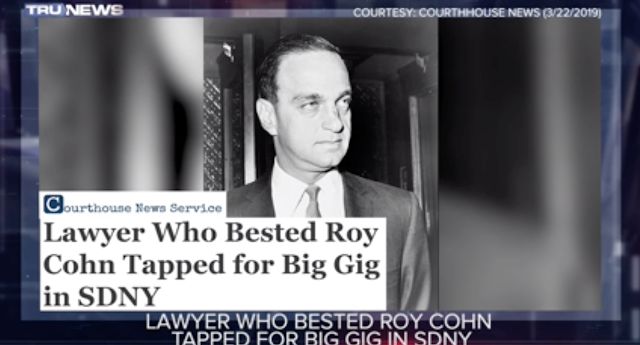 A few years after he defended the burgeoning Trump real estate empire against claims of housing discrimination, the future president’s oft-described mentor Roy Cohn fought to overturn the convictions of two Mafia clients.

Even with Cohn in their corner, however, Joseph Gambino, the cousin of “boss of all bosses” Carlo Bambino, and his right-hand man Carlo Conti, failed to secure a reversal from the Second Circuit.

“These findings of the experienced trial judge cannot lightly be set aside,” a unanimous three-judge panel ruled in 1977. “Nor do we see any reason for so doing.”

The case was an early success for rookie prosecutor Audrey Strauss, a graduate of Columbia Law School who edited appellate briefs in her new job at the Southern District of New York.

There is plenty of evidence to be brought out against Trump although, it seems he cooperated with the FBI early. Keep this in mind over the next weeks. 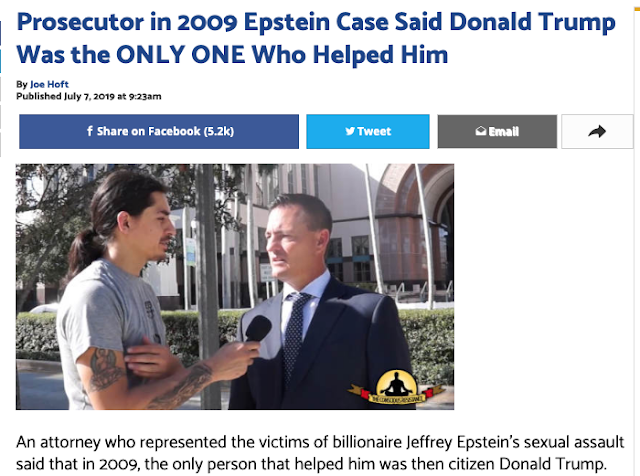 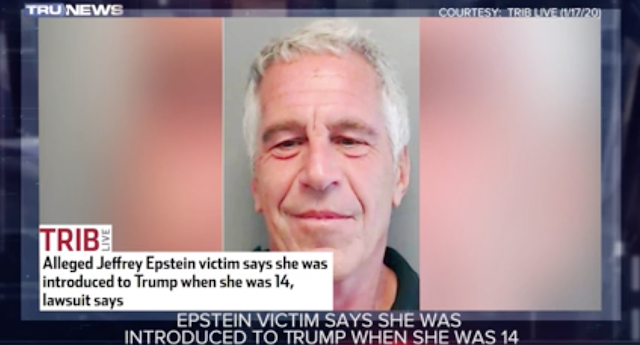 A woman who says she was Jeffrey Epstein’s first known victim claims in a new lawsuit that the multimillionaire sex offender introduced her to Donald Trump when she was 14, saying “This is a good one, right?"

Trump, according to the suit against Epstein’s estate, “smiled and nodded in agreement.” The woman filed the lawsuit Friday in Manhattan Federal Court under the pseudonym Jane Doe.

Trump and Epstein “both chuckled and Doe felt uncomfortable, but, at the time, was too young to understand why,” the lawsuit reads. The encounter happened in the mid-90s at Mar-a-Lago, Trump’s Florida resort, court docs said. The suit doesn’t accuse Trump of any abuse.

The victim met Epstein and his alleged madam, Ghislaine Maxwell, when she was 13 years old and attending Interlochen Arts Camp in Michigan, where she was in the voice program. The perverted financier and British socialite groomed her for abuse by frequently making references to sex and insisting she indulge their every whim, according to the suit. Epstein first sexually abused the girl toward the end of 1994, according to the suit. She claims she traveled with Epstein and Maxwell on his private jet.


All eyes will now be on Andrew 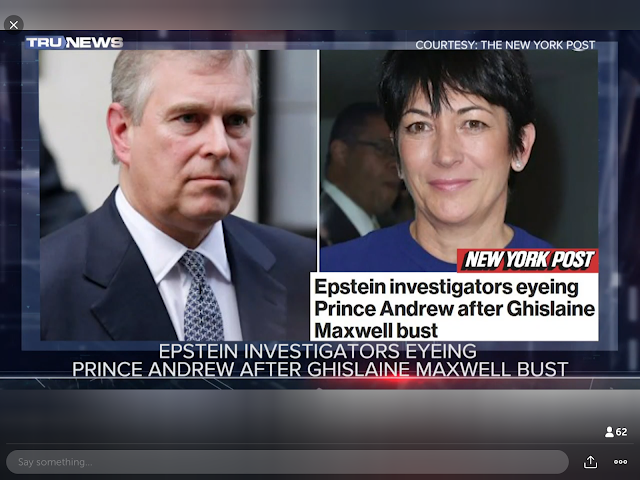 Investigators who busted accused Jeffrey Epstein procuress Ghislaine Maxwell still want to talk to Prince Andrew, they confirmed Thursday — as lawyers predict his socialite pal could now turn against him.

The charges against British socialite Maxwell, 58, include alleged sex crimes in her London townhouse — where Andrew has separately been accused by an Epstein “sex slave” of sleeping with her when she was 17.

The Queen recently spoke to Trump. I doubt they were just exchanging pleasantries. Were they discussing Prince Andrew? 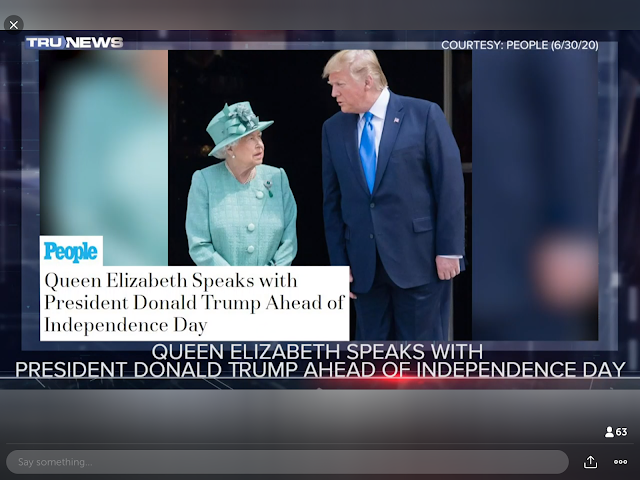 Queen Elizabeth is catching up with world leaders, including President Donald Trump.

The British monarch spoke to Trump over the phone on Tuesday ahead of Independence Day, the royal family confirmed via Twitter.

"Today, The Queen spoke to President Trump by telephone from Windsor Castle ahead of Independence Day in the United States on the 4th July," according to the tweet.

"The President and the Queen also reaffirmed that the United States and United Kingdom stand together in our Special Relationship and will emerge from this trying time stronger than ever before," according to Deere.


Perhaps it goes back to this? 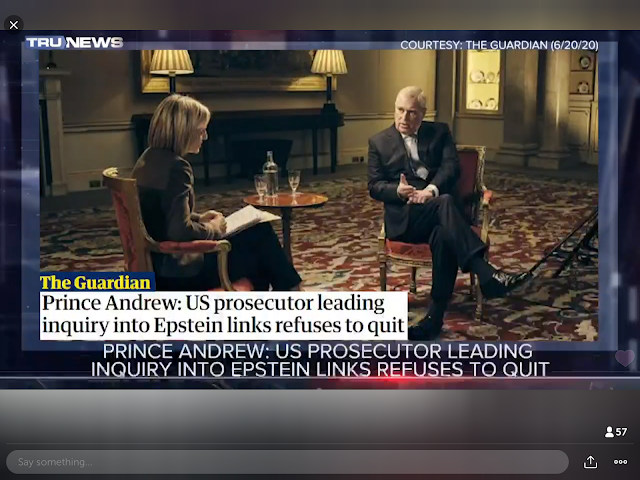 The senior US prosecutor investigating links between Prince Andrew and Jeffrey Epstein has vowed to carry on with his enquiries despite a dramatic attempt by the Trump administration to force him to resign.

In a late-night announcement on Friday, US attorney general William Barr declared Geoffrey Berman was stepping down, a development seen by critics as designed to benefit Trump politically and challenge the independence of the Justice Department.

But it also comes at a delicate time in the inquiry led by Berman, the US attorney in Manhattan, into Prince Andrew’s links to convicted sex offender Epstein.

Berman and the Duke of York have become embroiled in a series of public rows over what the US prosecutor alleges is his refusal to answer questions in their investigation into allegations of sex trafficking and other crimes against Epstein.


It seems that all the people surrounding Trump have been attracting a lot of attention and someone does not want Dershowitz to have access to potential evidence against him. 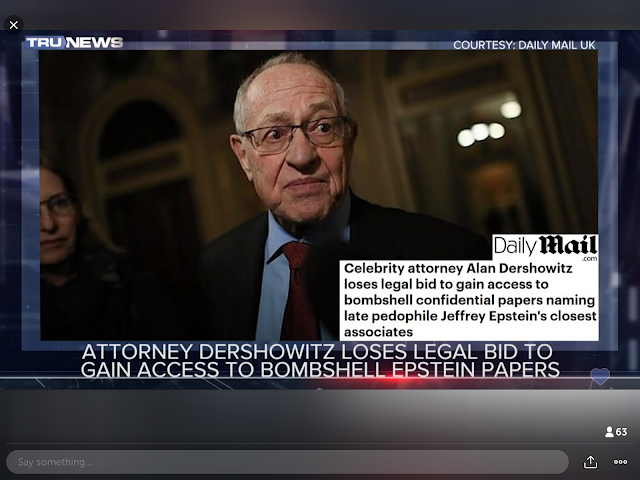 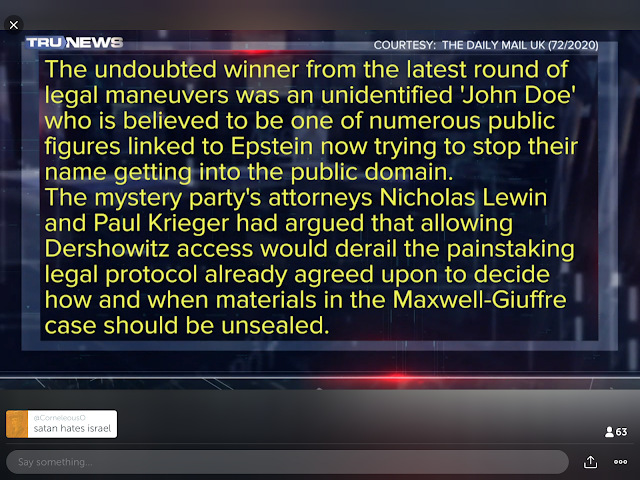 Finally, from today, there is this. Who ever heard of a judge ordering evidence to be DESTROYED.  This has the fingerprints of Israeli influence all over it. 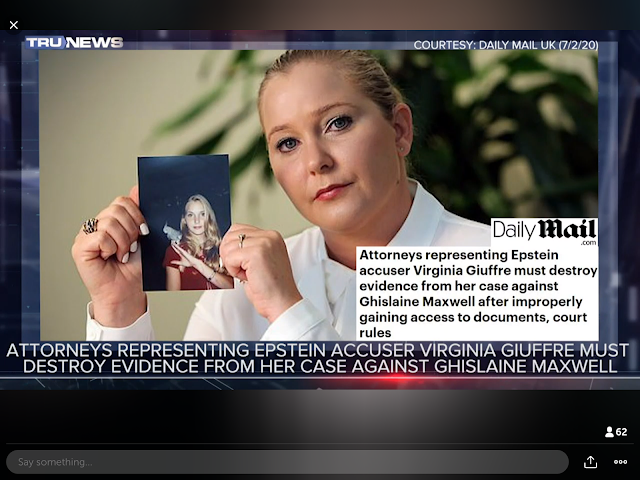 A U.S. district judge has ordered attorneys for Jeffrey Epstein accuser Virginia Roberts Giuffre to destroy evidence from her case against Ghislaine Maxwell.

Former Epstein attorney Alan Dershowitz, who had been seeking to gain full access to the Maxwell documents, was also denied them.

Preska said she was 'troubled' to learn during oral arguments last week that Giuffre's lawyers were given sealed documents against Maxwell.

https://www.dailymail.co.uk/news/article-8483209/Attorneys-representing-Virginia-Giuffre-ordered-destroy-evidence.html
Posted by seemorerocks at 14:50