Update on the Australian bushfires 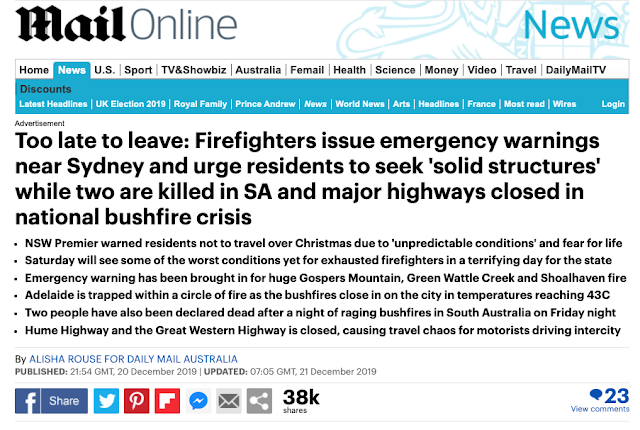 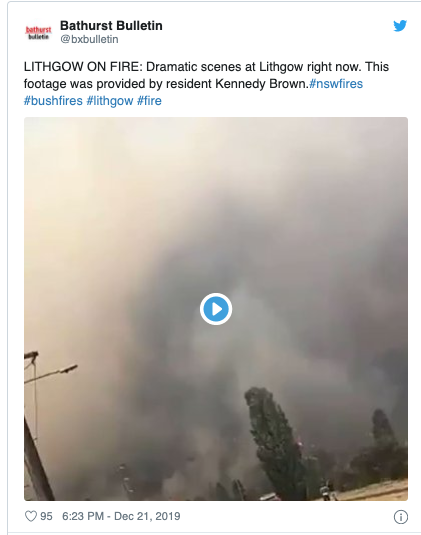 Violent winds kicked up the blaze, forcing emergency personal to door knock people warning them of the danger.
Residents are housing their homes with water and some are refusing to leave.
“I’ve never seen the fire jump as much as this; it’s spotting fires everywhere," Rob Corney told The Sunday Telegraph.
Lithgow is a town of about 12,000 people about two hours’ drive west of Sydney.
Meanwhile, 7 News Sydney has posted dramatic video footage of the fire raging up a cliff in the Grose Valley near Blackheath.
2h agoDecember 21, 2019
Holiday-makers are being urged to postpone trips for 24 hours, with NSW bushfires forcing the closure of the Hume Highway and blocking routes between Sydney and the state’s west.Transport for NSW says a section of the Hume Highway connecting Sydney and Canberra has been closed today in both directions between the Old Hume Highway at Colo Vale and Narellan.Picton Road is also closed at the M1 Motorway in the Blue Mountains, and the Great Western Highway is closed in both directions between Hartley and Mount Victoria due to the emergency-level bushfire burning out of control in the Grose Valley.The Bells Line of Road and Chifley Road are closed between Kurrajong and Lithgow as are Megalong Road, Jenolan Caves Road and Bowen Mountain Road.
Trains lines between Campbelltown and Moss Vale, to the south, and westwards between Katoomba and Bathurst have also been impacted.The Princes Highway has been closed in both directions between Bewong and Conjola on the state’s south coast.NSW Police assistant commissioner Karen Webb said the state’s residents should delay all non-essential travel.“The NSW Police message to motorists is today is not the day to start your holiday,” she told reporters at NSW Rural Fire Service headquarters. "Delay your travel until tomorrow. Conditions will be much milder and you can have a better trip.”
– Steven Trask, AAP
2h agoDecember 21, 2019
The RFS has tweeted a video from the Gospers Mountain fire.
Thick smoke can be seen engulfing the region.
2h agoDecember 21, 2019
NSW Rural Fire Service Commissioner Shane Fitzsimmons has given another media update, saying today had been an "awful" day. Here are the main points.
3h agoDecember 21, 2019
Four firefighters have been treated for heat exhaustion, including one "tough bastard".
The firey was battling a blaze at Green Wattle Creek at Balmoral and trying to save homes after a wind change at 2pm caused havoc.
Firefighter Warren Davis told The Sunday Telegraph the man was a tough bastard after he refused to leave.
"He’s just so bloody brave," he told the newspaper.
Dominic Morgan from the New South Wales ambulance said the four firefighters' conditions ranged from from minor to quite severe.
He said they were sending additional crews to the main fire areas.
"There are 100 additional paramedics out in the field, we are ready to standby and support firefighters as and when required," he said
3h agoDecember 21, 2019
Sydneysiders are being warned to brace for "erratic" conditions at 5pm.
A southerly change is moving up the coast and is expected to hit the city then.
Residents in the Green Wattle Creek area are being warned.
Grose Valley and Gospers Mountain fires will be a problem about 6pm.
In the Green Wattle Creek area fire is approaching Yanderra and it is too late to leave.
Seek shelter as the fire approaches.
Seek shelter in a solid structure to protect yourself from the heat of the fire.
3h agoDecember 21, 2019
Homes have been razed and left burnt out in raging bushfires across the country.
People have returned to their homes to find them charred and their belongings burnt to a crisp.
Stuart Temby rushed to his home in Harrogate Rd, Brukunga, and thought he'd have to jump into the pool if the fire got worse.
"I wasn't going to fight it, it was too quick … I was expecting Armageddon," he told the Adelaide Advertiser.
Stuart Temby at his damaged property.
3h agoDecember 21, 2019
Firefighters have warned major blazes could spot up to 18km ahead of the fire front.
These maps show potential ember attack that may come from fires today and overnight, based on the current fire conditions and latest wind forecasts.
The maps also illustrate potential for fires to break containment lines or spot over in areas.
The RFS says if you're in these areas you need to be ready now.

3:45 pmDecember 21, 2019HIGHLIGHT
The Victorian Country Fire Authority has issued a number of emergency warnings for fires throughout the state, including at Stirling, Tambo Crossing and Wattle Circle in the Victorian Alpine Region.
The fire at Tambo is now out of control.

The CFA Twitter account urged anyone in the region to take shelter indoors immediately.
"It is too late to leave," the warning read.
Earlier, watch and act warnings were issued for Chute, Lexton and Mount Lonarch as well as Bruthen, Deptford, Double Bridges, Fairy Dell, Ramrod Creek, Waterholes, Ward Crossing and Wiseleigh.