With all the excitement of a schoolboy essay: "guess what I did in the holidays"

Mike Horn's gallant march to the North Pole: is it all that it is written up as?


I am following the progress of self-proclaimed explorer and "motivational speaker" who, Mike Horn, is reportedly realising his dream in the Arctic cold at 89 deg N. with his companion, "Borgeoisland". 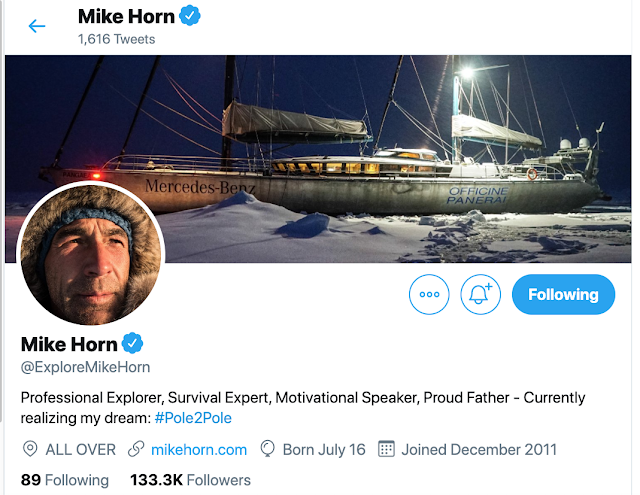 They have come up with some interesting, often scarcely credible photographs such as the following that shows up something interesting.

You could be excused for missing it in the original photograph 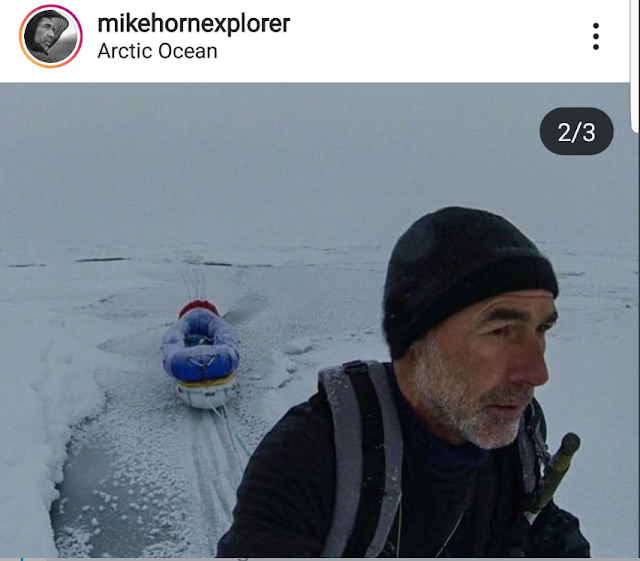 Go in just a little further.... 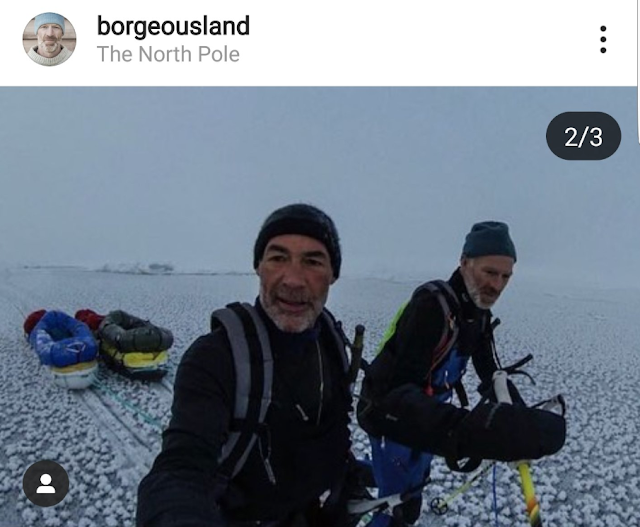 Or a little bit further still.... 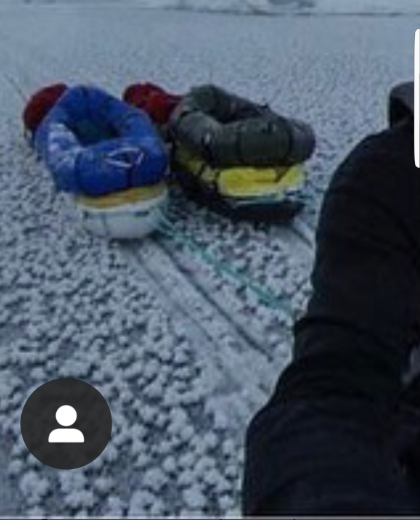 It reminds my just a little of this - "ice boulders" 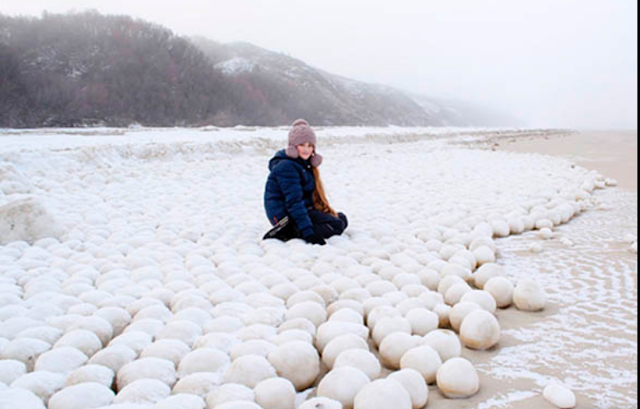 This is described here -


This would all be fascinating if it could be taken for granted that they are where they are claiming to be and is. 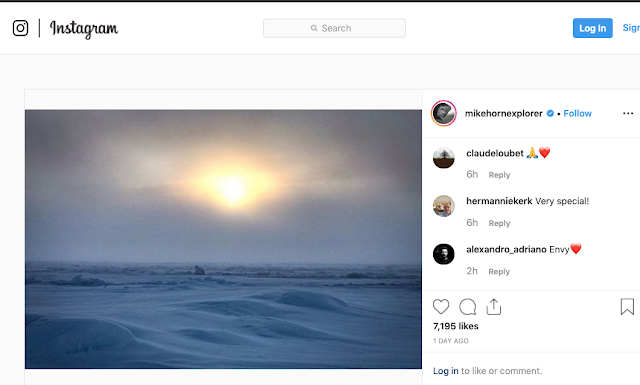 Apparently the expedition set off in the Panagea from Nome, Alaska around 3 September.

Everything is described with the excitement (and the profundity) of a schoolboy writing an essay about the greatest Horror Show on the planet - "Guess what I did in my holidays?"

By 26 September they had reached their destination at 85 degrees North and they were dropped off for their march to the Pole.

If the narrative is to be believed it is deeply impressive.  For a start, this vessel made it right through to 85 degrees North at a time of the year when the ice is supposed to be refreezing.

It is so surprising to find a small vessel making its way to these latitudes, seemingly without too much difficulty.

One might have expected some photos en route, or some specific information on what they encountered.

But none is forthcoming and to describe subsequent observations as grossly inadequate in the circumstnances would not be an exaggeration. 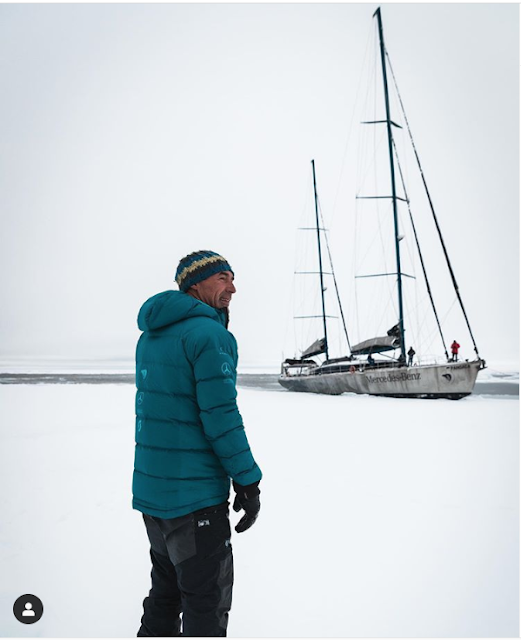 If I was to describe the feeling it would be as if we just had the journals of Captain Robert F.Scott without the science of Dr. Wilson, Herbert Ponting etc.

By the17th October Mike and "Borgeoisland" were reporting being at their destination. 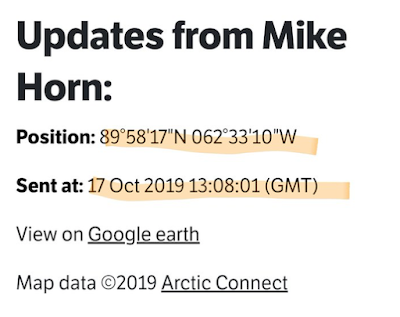 Throughout, Mike and "Borgeoisland" have been posting pictures showing the sun still shining at their location, ostensibly at around 89 degrees North. 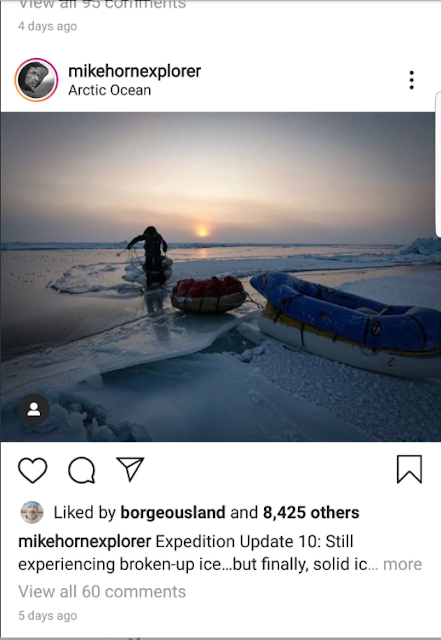 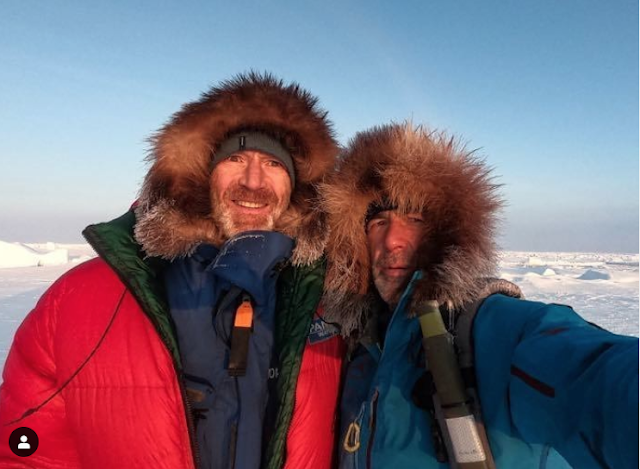 There is one little problem with this.

This is how things looked on October 11th. It might have been twilight but only outside the dark circle - not 89 degrees North! 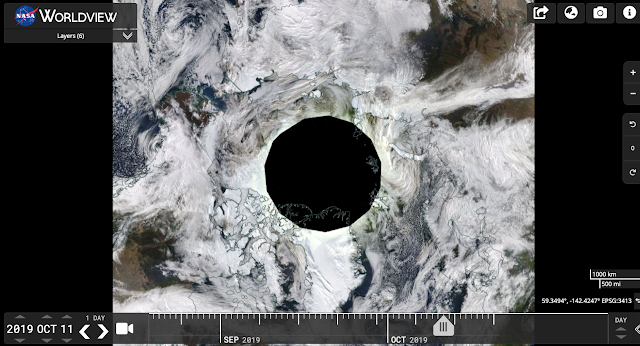 I just had one more check...

The long marches every day seem to have stimulated Mike to wax lyrical about the meaning of life but hasn't stimulated many thoughts about the reality he found himself in. 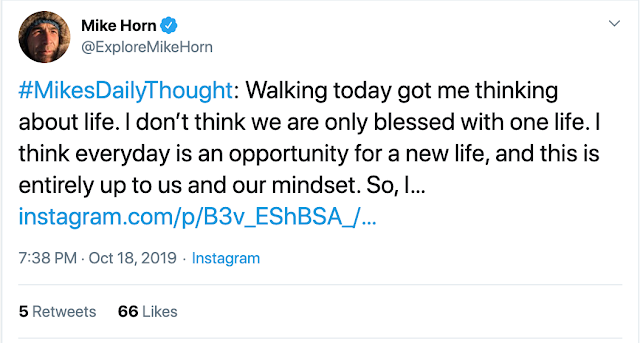 This is his latest update... 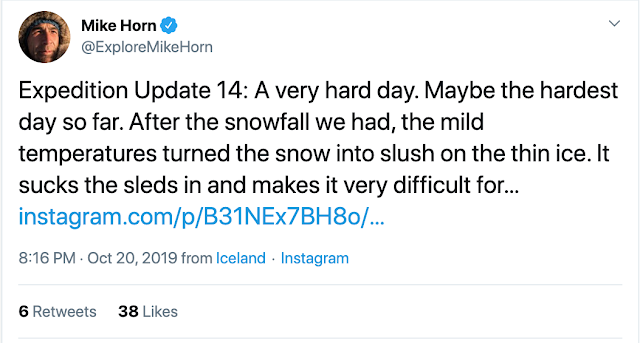 Update 14: A very hard day. Maybe the hardest day so far. After the snowfall we had, the mild temperatures turned the snow into slush on the thin ice. It sucks the sleds in and makes it very difficult for us to pull them.

The great news though is that we finally reached the latitude of 88 degrees north. Weather forecasts predict southern drifts for the next 3 days, so from now on our goal is to stay beyond 88 degrees north. 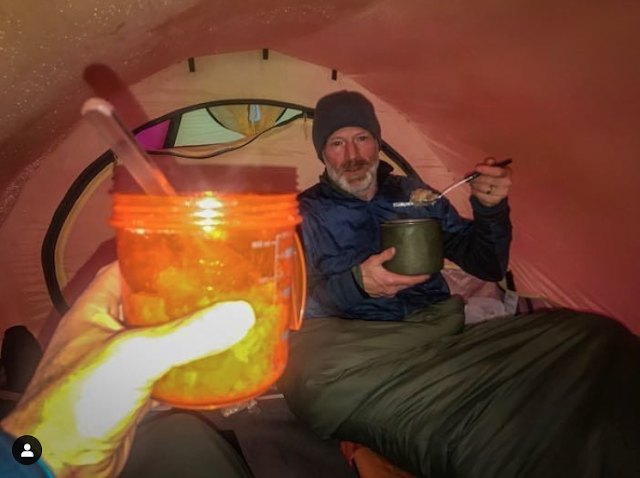 When we get into the tent, we melt some snow and ice to be able to eat and drink. It is important for us to be careful which types of snow and ice we use, because young ice has salt in it as it is frozen seawater.


Once in the tent, we get into our sleeping bags and this is where we stay until we get out of the tent the next morning at 6am.

At this stage of the expedition, we are eating about 5000 to 5500 calories per day and have not yet started to feel hungry. In 12 days from now, we will have to increase our calorie intake to 6500 to compensate for the colder weather conditions coming our way. Eating properly and sufficiently is essential to the success of any expedition. Of course, food is our fuel to continue making physical progress, but is also a comfort for us in these harsh conditions. Starting the day with a warm meal gives us energy to leave the tent, and after every long day, we look forward to getting back in the tent to eat another warm meal before we get some sleep…and as we all know, a man with a full belly is a happy man!


Boy, this is sounding more and more like Captain Scott's ill-fated expedition in 1912. 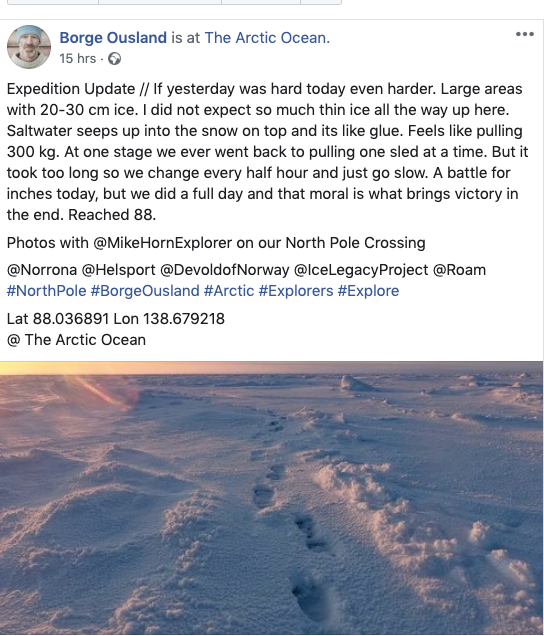 There are numerous references made to thin ice - but very little surprise and no reflection on what it means, is expressed. 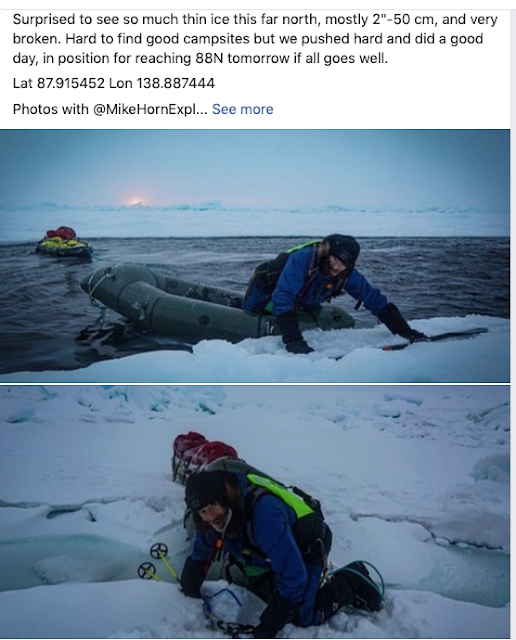 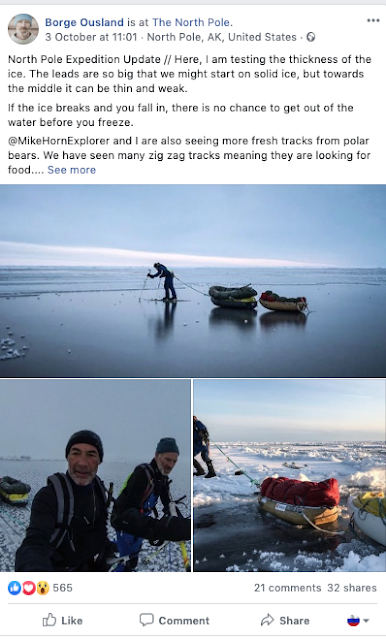 "Here, I am testing the thickness ofd the ice. The leads are so big that we might start of solid ice, but towards the middle of it can be thin and weak.

"If the ice breaks and you fall in, there is no chance to get out of the water before you freeze." 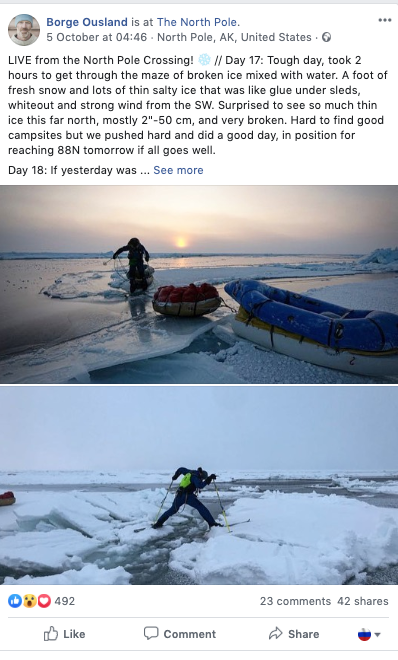 I am afraid that after looking through this couple's account of their expedition I am reinforced in my view that there is very little one can believe in these days.
If I had the wherewithall to produce nice photos from, say, north of Alaska I could easily write as empty an account as Mike Horn has.
There is a lot that one that one can do with a website, a Twitter account.
I would love to take all this at face value – it certainly confirms a few things – but given the above I can't.

At the very least this seems to have all the signs of having nothing to show for it after it is all over - maybe a TEDtalk?


In the meantime I would love to know this. How DO you send a tweet (or an Instagram photo) from the North Pole?

In the meantime this article appeared in Scandanavian media

Børge Ousland on thin ice in the Arctic Ocean: - We need to apply the emergency brakes”

Being able to travel by boat all the way up to 85 degrees and 30 minutes north would be absolutely unbelievable for a couple of decades ago. We see that there is far less ice in the Arctic Ocean than before, says polar explorer, Børge Ousland.
https://www.nrk.no/urix/borge-ousland-pa-tynn-is-i-polhavet_-_-vi-ma-dra-i-nodbremsen-no-1.14715575?fbclid=IwAR23WSg6KkAB9nov8_YoKEJRjsKwMRqqgrt79mwTFurpm82YDjSukgxMAYk