Elijah Magnier on the Turkish attack on the Kurds in Syria

WINNERS AND LOSERS IN

THE TURKISH ATTACK ON

THE KURDS IN SYRIA 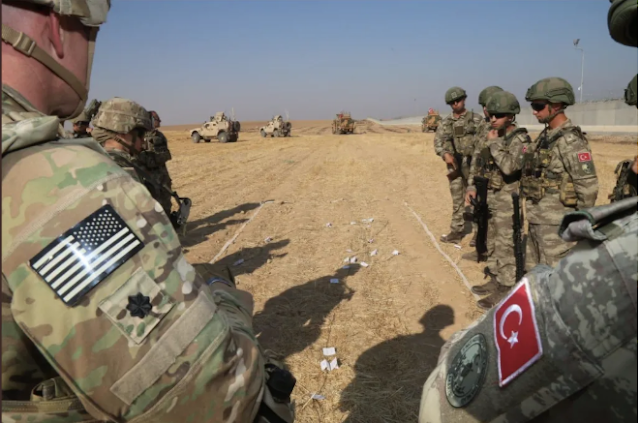 The United States of America emerged victorious from the Second World War, and came out stronger than any other country in the world. The allies- notably the Soviet Union- won the war but emerged much weaker. They needed to reconstruct their countries and rebuild their economies, with the US demanding huge retrospective payments for its support. The US became a superpower with nuclear bomb capability and an imposing power of dominance. Industrial countries rebuilt in what the Germans called their Wirtschaftswunderand the French les Trentes Glorieuse, the thirty years of post-war prosperity. Meanwhile the US leveraged its prosperity to spread its hegemony around the world. US power was enhanced with the beginning of Perestroika
and after the fall of the Soviet Union. In the new millennium the US establishment declared the “War on Terror
” as justification to occupy Afghanistan and Iraq, while attempting to subdue
Hezbollah in Lebanon, changing the régime in Libya and attempting to destroy Syria, all with the goal of reshuffling and forming a “New Middle East
”

In the Levant, the US has dramatically failed to reach its objectives, but it has succeeded in waking Russia from its long hibernation, to challenge the US unilateral hegemony of the world and to develop new forms of alliance. Iran has also challenged the US hegemony incrementally since the 1979 “Islamic Revolution”. Iran has planned meticulously, and patiently built a chain of allies connecting different parts of the Middle East. Now, after 37 years, Iran can boast a necklace of robust allies in Palestine, Lebanon, Syria, Iraq, Yemen and Afghanistan- who are all ready, if necessary, to take up arms to defend Iran. Iran, in fact, has greatly benefited from US mistakes.  Through its lack of understanding of populations and leaders around the world, it has universally failed to win “hearts and minds” in every Middle Eastern country where it imposed itself as a potential ally.

The arrival of President Donald Trump to power helped US allies and the anti-US camp to discover, together, the limits and reach of US sanctions. Russia and China took the lead in offering a new, softer model of an alliance, which apparently does not aim to impose another kind of hegemony. The offer of an economic alliance and partnership is especially attractive to those who have tasted US hegemony and wish to liberate themselves from it by means of a more balanced alternative.

During this period of Trump’s ruling, the Middle East became a huge warehouse of advanced weapons from varied sources. Every single country (and some non-state actors) has armed drones- and some even have precision and cruise missiles. But superiority in armaments by itself counts for very little, and its very balance is not enough to shift the weight to one side or another. Even the poorest country, Yemen, has done significant damage to oil-rich Saudi Arabia, a country highly equipped, militarily, and with the most modern US hardware in the Middle East.

US President Trump was informed about the evident failure to change the régime in Syria and the equal impossibility of dislodging Iran from the Levant. He most probably aimed to avoid the loss of lives and therefore decided to abandon the country that his forces have occupied for the past few years. Nonetheless, his sudden withdrawal, even if so far it is partial (because he says, a small unit will remain behind at al-Tanf, to no strategic benefit since al-Qaem border crossing is now operational) – came as a shock to his Kurdish and Israeli allies. Trump proved his readiness to abandon his closest friends & enemies overnight.

Trump’s move offered an unexpected victory to Damascus. The Syrian government is now slowly recovering its most important source of food, agriculture and energy. North-East Syria represents a quarter of the country’s geography. The northern provinces have exceptional wealth in water, electricity dams, oil, gas and food. President Trump has restored it to President Bashar al-Assad. This will also serve Trump’s forthcoming election campaign.

Assad trusts that Russia will succeed in halting the Turkish advance and reduce its consequences, perhaps by asking the Kurds to pull back to a 30 km distance from the Turkish borders to satisfy President Erdogan’s anxiety. That could also fit the Turkish-Syrian 1998 Adana agreement (5 km buffer zone rather than 30 km) and offer tranquillity to all parties involved. Turkey wants to make sure the Kurdish YPG, the PKK Syrian branch, is disarmed and contained. Nothing seems difficult for Russia to manage, particularly when the most difficult objective has already been graciously offered: the US forces’ withdrawal.

President Assad will be delighted to trim the Kurds’ nails. The Kurds offered Afrin to Turkey to prevent the Syrian government forces controlling it. The Kurds, in exchange for the State of their dreams (Rojava), supported US occupation and Syria’s enemy, Israel. Prime Minister Benyamin Netanyahu bombed hundreds of targets in Syria, preferring ISIS to dominate the country and pushing Trump to give him the Syrian-occupied Golan Heights as a gift- although the US has no authority over this Syrian territory.

Hundreds of thousands of Syrians were killed, millions of refugees were driven from their homes and hundreds of billions of dollars were spent on destroying Syria. Nonetheless, the Syrian state and President Assad have prevailed. Notwithstanding the consequences of the war, Arab and Gulf countries are eager to return to Syria and participate in reconstruction. Whoever rules Syria, the attempt to destroy the Syrian state and change the existing régime has failed.

Russia is one of the most successful players here, on numerous fronts, and is now in a position President Putin could only have dreamed about before 2015. Numerous analysts and think tanks predicted Moscow would sink into the Syrian quagmire, and they mocked its arsenal. They were all wrong. Russia learned its lesson from the 1979 invasion of Afghanistan. It offered air and missile coverage and brilliantly cooperated with Iran and its allies as ground forces.

President Putin skillfully managed the Syrian war, striking a balance and creating good ties with Turkey, a NATO ally- even after the downing of his jet by Ankara in 2015. Russia wanted to collaborate with the US but was faced with an administration with persistent “Red-Soviet” phobia. Moscow proceeded without Washington to solve the Syrian war and defeat the jihadists who had flocked to the country with support from the West (via Turkey and Jordan) from all over the world.

Russia showed off its new arsenal and managed to sell a lot of its weapons. It has trained its Air Force using real battle scenarios, fought alongside the Syrian and Iranian armies, and a non-state actor (Hezbollah). It defeated ISIS and al-Qaeda 40 years after its defeat in Afghanistan. President Putin has distinguished himself as a trustworthy partner and ally, unlike Trump- who abandoned the Kurds, and who blackmails even his closest ally (Saudi Arabia).

Russia imposed the Astana process instead of Geneva for peace talks, it offered countries to use their local currencies for commerce rather than the dollar, and it is dealing pragmatically with Iran and Saudi Arabia, and with Assad and Erdogan. The Americans, by their recklessness, showed themselves incapable of diplomacy.

Moscow mediated between the Syrian Kurds and the central government in Damascus even when these had been under US control for years. Putin behaved wisely with Israel even when he accused Tel Aviv of provoking the killing of his officers, and stayed relatively neutral in relation to the Iran-Israel struggle.

On the other hand, Tel Aviv never thought Syria would be reunited. Today Damascus has armed drones, precision and cruise missiles from Iran, supersonic anti-ship Russian missiles- and has survived the destruction of its infrastructure and so many years of war.

Israel has lost the prospect of a Kurdish state (Rojava) as an ally. This dream has gone now for many decades to come and with it the partition of Syria and Iraq. The “Deal of the Century” makes no sense anymore and the non-aggression deal with the Arab states is a mirage. Everything that Trump’s close advisor, Prime Minister Netanyahu, wanted has lost its meaning, and Israel now has to deal with the Russian presence in the Middle East and bear the consequences of the victory achieved by Assad, the Russians, and the Iranians.

After the Kurds, Israel is the second biggest loser- even if it has suffered no financial damage and no Israeli lives have been lost in combat. Netanyahu’s ambitions can no longer be used in his election scenario. Israel needs to prepare for living next door to Assad, who will certainly want back Syria’s Golan- a priority for Damascus to tackle once domestic reconstruction is on its way. He has been preparing the local resistance for years, for the day when Syria will recover this territory.

Proofread by: Maurice Brasher and  C.G.B

This article is translated for free to many languages by volunteers so readers can enjoy the content. It shall not be masked by Paywall. I’d like to thank my followers and readers for the confidence and support. If you like it, please don’t feel embarrassed to contribute and help fund it for as little as 1 Euro. Your contribution, however small, will help ensure its continuity. Thank you.

Part one is HERE

Part two is HERE
Posted by seemorerocks at 16:25