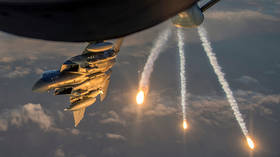 US fighter jets and gunship helicopters were sent to scare off Turkish-backed militants in northern Syria after they came “very close” to US troops at Ain Issa, the Pentagon said. Washington has also sent a complaint to Ankara.
F-15 fighters and AH-64 Apache gunships were used in the “show of force” on Tuesday, an unnamed US official told reporters, after the militants “violated a standing agreement” not to threaten US troops. A formal complaint was lodged with the Turkish military through diplomatic channels, the official added.
Though US troops have been withdrawing from Syria for the past week, some Special Forces operators were apparently still in the area of Ain Issa, located on the strategic M-4 highway about halfway between the Syrian-Turkish border and the former Islamic State (IS, formerly ISIS) “capital” of Raqqa.
©  Google Maps
Last week, Turkey launched ‘Operation Peace Spring’ with the stated purpose of establishing a “safe zone” inside Syria – mainly on territory held by Kurdish militias allied with the US, but which Ankara considers terrorist organizations.
Rather than Turkish regulars, however, the troops used in the operation appear to be jihadist militants, which similarly happened in 2016 during ‘Operation Euphrates Shield’ that targeted the Kurds around Afrin.
While the Western press has previously referred to these militants as “moderate rebels,” a senior US official was quoted on Tuesday calling them “thugs and bandits and pirates that should be wiped off the face of the earth.”
Meanwhile, the Kurds have struck an agreement with the Syrian government troops to move to the border and block the militants. Previously, the US blocked any attempts to return the territories liberated from IS by its Kurdish allies to the government in Damascus, as they contained most of Syria’s oil and agricultural resources.

Those "moderate rebels"were terrorists all along, it is being discovered. 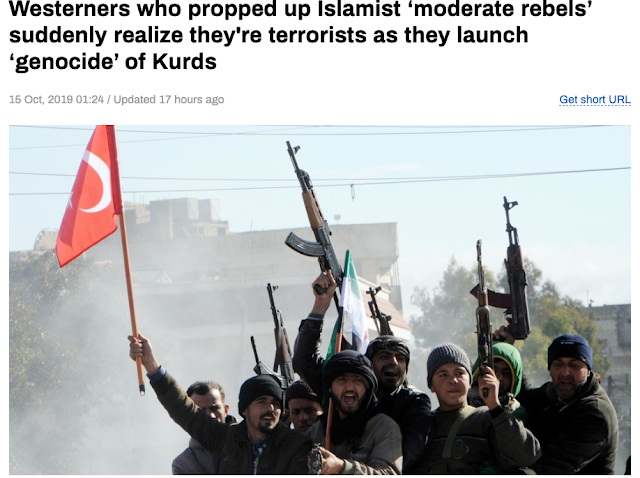 https://www.rt.com/op-ed/470943-moderate-rebels-terrorists-kurds/
Posted by seemorerocks at 15:39