US bombs its own military base in Syria


US bombs its own military

base in Syria to ‘reduce

‘Is this the America you grew up believing in?’ asks Republican congressman 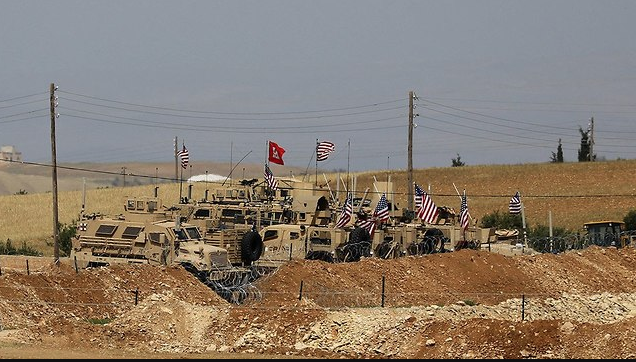 The US military bombed its own base as part of its hasty withdrawal from Syria as militias backed by Turkey closed in, an Operation Inherent Resolve official has confirmed.

Jets wiped the facility at the Lafarge Cement Factory, between Ain Issa and Kobani near the Turkish border, from the map just hours after troops withdrew, a spokesman said.

Earlier this month, Donald Trump controversially ordered ground troops out of the region where they had been supporting the Kurdish-led Syrian Democratic Forces (SDF) in the battle against Isis.

It allowed Turkey to invade Kurdish-held parts of Syria’s north and prompted widespread criticism, with both Republicans and Democrats overwhelmingly supporting a congressional resolution condemning the president.

Russia has moved into the power vacuum and has said it will act as a broker to keep Turkish and Syrian government military forces separate.

On Wednesday, footage emerged of Russian soldiers taking over a US base in the strategically important town of Manbij.

Revealing the US decision to conduct an airstrike on one of its own bases, Colonel Myles Caggins, the spokesman for Operation Inherent Resolve, said on Twitter: “#Coalition forces continue a deliberate withdrawal from northeast #Syria. On Oct. 16, we vacated the Lafarge Cement Factory, Raqqa, and Tabqah.”

Republican congressman Adam Kizinger, who represents Illinois, tweeted: “We bombed our own base on purpose, because of the impulsive decision by @realDonaldTrump didn’t leave time to evacuate the right way. Is this the America you grew up believing in?”

The strike came as Mr Trump published a letter he had sent Recep Tayyip Erdogan, Turkey’s president and a Nato ally, on 9 October, urging him not to invade.

Mike Pence and Mike Pompeo, the US vice president and secretary of state, were due to meet Mr Erdogan in Ankara on Thursday in a bid to persuade him to back down.