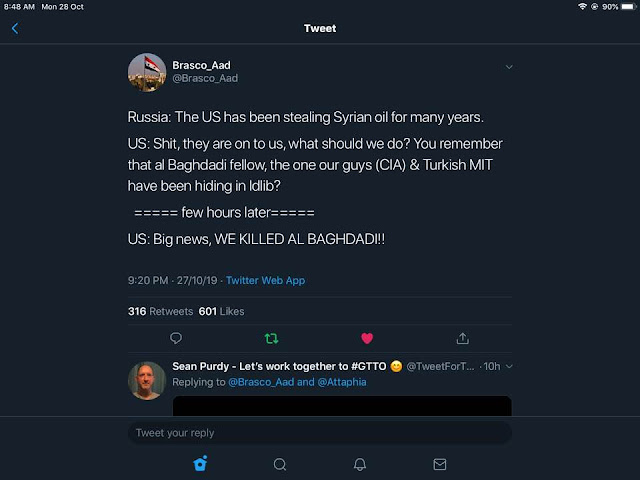 
US President Donald Trump has announced that Islamic State leader Abu Bakr al-Baghdadi was killed during a US military raid in northwest Syria, confirming an avalanche of rumors on the terrorist’s death.

“Al-Baghdadi has been killed… in a daring nighttime raid,” Trump said in a live address from the White House.

“The United States brought the world's No.1 terrorist leader to justice.”
The troops involved in the elimination of the terrorist “accomplished the mission in grand style,” while the IS leader met his end “crying and screaming” due to being terrified by Americans might, Trump boasted.

Military choppers and even drones provided air cover as US special forces engaged targets on the ground in Idlib province – the last major terrorist stronghold in the country.

Al-Baghdadi escaped to a tunnel dug under his hideout and took three of his young children.  He was chased by the dogs and when he reached the dead end the terrorist detonated the suicide vest he was wearing.

The IS leader and his children died on site, Trump confirmed, saying the body of the notorious militant "was mutilated", but the tests allowed to identify him.

The US forces suffered no casualties during the two-hour-long raid, with only a dog, which chased the terrorist into the tunnel, being hurt. Meanwhile, “many” of al-Baghdadi’s fighters and associates were killed. Washington also obtained “highly sensitive materials,” which will reveal a lot about IS activities and future plans, Trump said.

The president also praised the “great cooperation” with Russia during the op as Moscow opened up the airspace under its control in Syria to American planes when Washington asked for it. The US has been after al-Baghdadi for many years, but was only able to scope out his whereabouts a few weeks ago, he said.

Meanwhile, the elimination of the IS leader doesn’t change his plans to withdraw American forces from Syria, Trump noted. However, the US troops who were sent to secure the oil fields in the country’s northeastern province of Deir ez-Zor earlier this week, will remain on site.

Somewhat raining on Trump’s parade, US Defense Secretary Mark Esper said later on Sunday that the death alone cannot eradicate the ideology that inspires Islamic State group. According to his French counterpart, Florence Parly, the American operaion was an "early retirement for a terrorist, but not for his organisation."

There have been previous reports of al-Baghdadi’s death, but none were confirmed. At the height of its power, al-Baghdadi’s terrorist group controlled vast swathes of Iraq and Syria. The Syrian Army, aided by Iran and Russia, has nearly eradicated the group from its territory.

The killing of al-Baghdadi could actually have the opposite effect to what Trump was declaring, former Pentagon official Michael Maloof warned in an interview with RT.

“I think it’ll give it [Islamic State] a fresh impetus to continue on,” he pointed out, adding that a lot will depend on how charismatic the group’s new leader will be.

There are also rumors that al-Baghdadi’s death may pave the way for a reunion between IS and Al-Qaeda, which would be “an even more potentially dangerous thing,” Maloof said. The two groups used to be enemies due to al-Baghdadi falling out with Al-Qaeda leader, Ayman al-Zawahiri, but now this obstacle has been removed by the US. 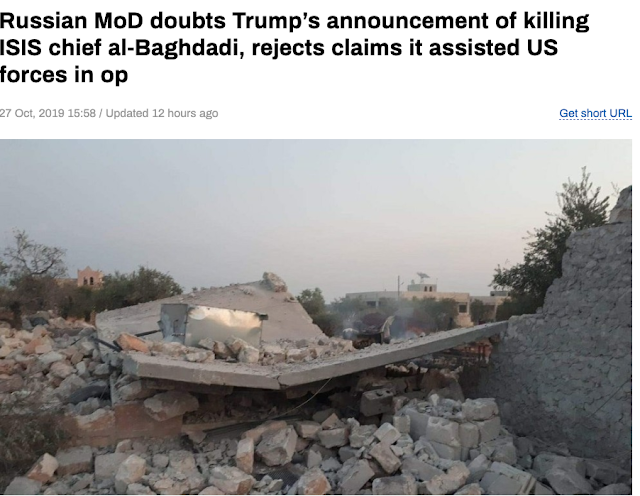 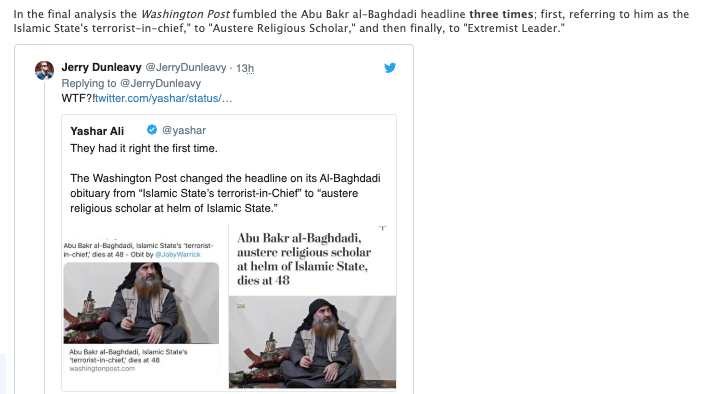 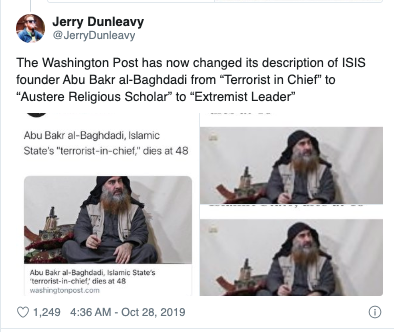 https://www.zerohedge.com/geopolitical/msm-pans-al-baghdadi-takedown-praise-religious-scholar-promising-young-footballer
Posted by seemorerocks at 18:06