Putin and Erdogan reach an agreement 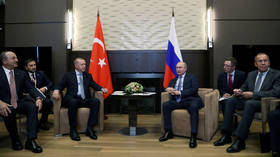 Russian military police and Syrian servicemen will be deployed to northeastern Syria, while Turkey’s operation ‘Peace Spring’ will continue in a limited area, presidents Putin and Erdogan have agreed after lengthy talks.
Moscow understands the reasons behind the ongoing Turkish military incursion into Syria, Russia's President Vladimir Putin said, though he stressed it must not play into the hands of terrorists and that the territorial integrity of Syria must be preserved. Ultimately, the country must be freed from all “illegal foreign military presence,” the president added, reiterating Moscow's long-time position.

The almost-seven-hour-long talks in Sochi, Russia between Putin and his Turkish counterpart Recep Tayyip Erdogan were focused on the situation in Syria, particularly the ongoing offensive in its northeastern region.

The agreement says the Kurdish-led militias – the prime target of the Turkish operation – must withdraw into Syrian territory beyond 30km from the Turkish border. Erdogan's operation, meanwhile, will continue in a limited area – between towns of Tell Abyad and Ras al-Ayn – up to 32km inside Syrian territory.

Syrian army to be deployed to the border

Other parts of the Syrian border – from Kobani to Tell Abyad and from Ras al-Ayn to the Iraqi border – are set to be controlled by the Syrian military and border guards, supported by Russian military police.

Joint Russia-Turkey patrols along the border

Captive ISIS militants must be contained

The issue of multiple prisons and camps in northeastern Syria where Islamic State (IS, formerly ISIS) fighters are detained, was specifically singled out. Putin stressed that the inevitable chaos created by the Turkish operation should not allow them to escape.

“It’s important that members of terrorist organizations, including ISIS, whose militants are held captive by Kurdish armed groups and are trying to break free, do not take advantage of the Turkish armed forces actions,” Putin stressed.

Russia’s Foreign Minister Sergey Lavrov, for his part, urged those who had created and maintained the prisons to understand their “responsibility” in preventing IS detainees' escape.

Both Turkey and Russia reiterated the importance of the 1998 Adana accord, a security pact between Syria and Turkey. Among other things it allows the Turkish military to carry out cross-border operations in Syria, while Damascus promised not to harbor members of the Kurdistan Workers’ Party (PKK), which Ankara considers a terrorist organization. While diplomatic relations between the two were significantly damaged during the years of the Syrian conflict, the pact was never denounced, and now Moscow has pledged to support its implementation in the “modern reality.”

The PKK has been waging a low-intensity insurgency in Turkey for decades, ultimately seeking the creation of an independent Kurdish state. Ankara has accused the Kurdish-led militias across the border in Syria of having strong ties to the PKK. Indeed, PKK flags and insignia have been repeatedly seen displayed by Kurdish forces in Syria, though the extent of the ties between the groups is not known.

US stance on Syria too ‘fluid & contradictory’ to listen to

The Turkish-Russian memorandum mostly covers the same region and the same issue as the deal reached between Ankara and Washington five days ago. Still, the US and its “ceasefire” were barely mentioned by the top officials after Tuesday's Sochi talks.The reason behind that was summed up by Russia’s foreign minister.

”We do not particularly look at the United States and its stance. That stance is quite variable and contradictory, and of course, the coalition led by the United States is in Syria illegally, this is well known,” Lavrov told reporters.

Damascus is on board

After the meeting with Erdogan, Russia’s president spoke to his Syrian counterpart Bashar Assad, Kremlin spokesman Dmitry Peskov said. Assad has expressed support for the memorandum, stating that the Syrian border guards are ready to work together with Russian military police.

On October 9, the region was invaded by the Turkish military and affiliated militants from the so-called Syrian “opposition.” The operation targeted Kurdish-led militias, which Ankara considers to be “terrorists.” The assault, dubbed ‘Operation Peace Spring’, kicked off just two days after US President Donald Trump announced the withdrawal of his country’s troops from the northeast of Syria.

Last week, the US and Turkey agreed a five-day ceasefire in the region, which expires at 10pm local time (19:00 GMT) on Tuesday. The pause in the operation was intended to allow the Kurdish-led militias to withdraw, facilitating the creation of a 20-mile “safe zone” within Syria that Turkey has sought to establish. Earlier in the day, Erdogan said he was ready to resume the operation if the US fails to keep its promises.

Moscow has repeatedly urged Turkey to show restraint in its activities in Syria, and warned it against doing anything that might hamper the political settlement process in the country. 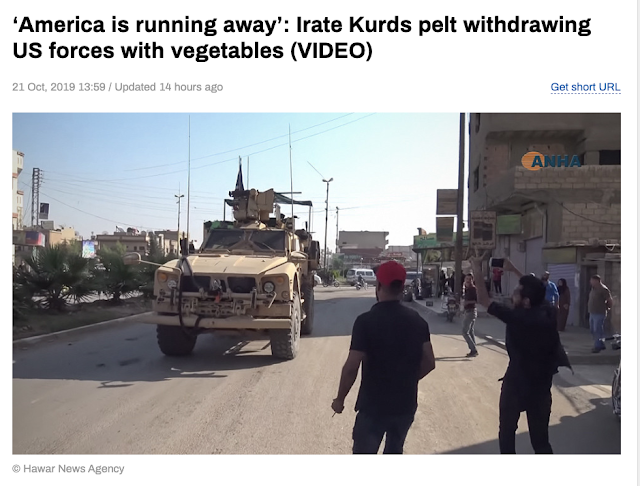 
Turkey will not be launching a new offensive against Kurdish militias in northern Syria, following a five-day pause in hostilities and high-level talks in Moscow, Ankara’s Defense Ministry said.


The Turkish Defense Ministry then said in a statement that there was “no need to carry out a new operation at this stage,” adding that the creation of a “peace corridor” in the border area would ensure the safe return of millions of displaced Syrians.


Turkey’s latest incursion into the north began earlier this month, directed at Kurdish militias it says are linked to terrorism and its own domestic Kurdish separatist movement.


Until recently, around 1,000 American soldiers were stationed with the Kurdish fighters near the border, insulating them from a Turkish offensive, but a sudden US withdrawal last week cleared the way for Ankara’s operation, which it had threatened for months. Washington’s retreat paved the way for a deal between the Kurds and Damascus, allowing Syrian forces to regain control of territories in the northeast after over 7 years of war.


Even on Tuesday Ankara questioned if the US held its end of the deal and facilitated the withdrawal of Kurdish forces, but the Turkish ministry then said Washington told Ankara the Kurdish groups had all left the area by the end of the 120-hour ceasefire pause.