Lowest planting of wheat in US for 110 years 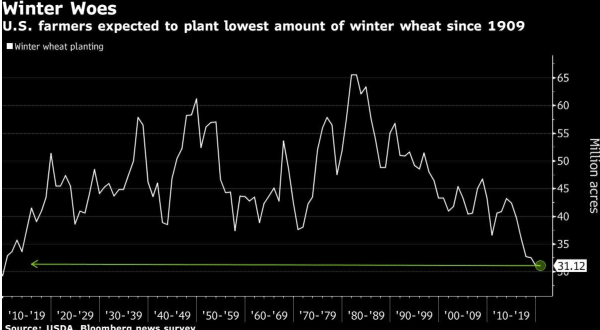 That’s according to a Bloomberg survey. Analysts are predicting another year of declines for acreage as U.S. producers face stiff competition from global rivals gathering bumper crops. World supplies are so plentiful that futures for hard red winter wheat are down about 15% in 2019, one of the worst performances for commodities this year. In some parts of the southern U.S. Plains, wheat is now cheaper than corn, making the yellow grain a better bet.

“The price doesn’t get high enough to tell us to keep planting wheat,” said Ken Horton, who grows wheat, corn and sorghum with his sons in Leoti, Kansas. Horton is cutting plantings of the HRW wheat variety by 30% to about 3,000 acres.

“Any time you have cash corn higher than cash wheat, you’ll see more acres go to corn,” Horton said in a telephone interview.

However, rains in parts of the Midwest may hamper the last phase of sowing. Some growers who double-crop wheat in soybean fields might not be able to harvest their soy in time to seed wheat, according to Arlan Suderman, chief commodities economist at INTL FCStone in Kansas City. That could result in fewer planted acres of the soft red winter variety, he said.

“There’s quite a correlation in soybean-harvest pace and wheat plantings,” Suderman said by phone.

Planted acres of all varieties of winter wheat are forecast to decline to 31.118 million, according to a Bloomberg survey of six analysts. That would be down from 31.159 million a year ago and above only the 29.196 million acres from 1909, the first year in USDA records. The agency won’t make an official estimate until January….. [ ]