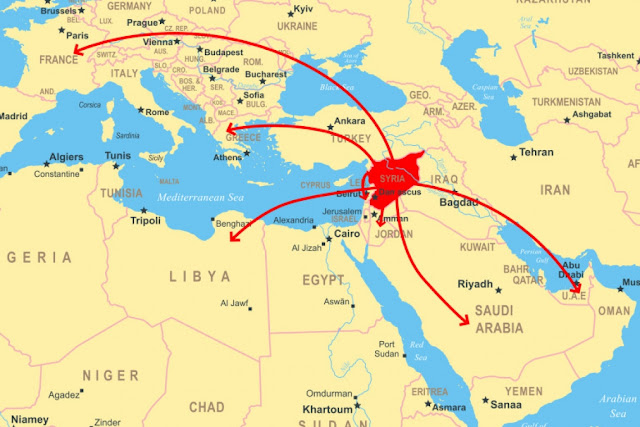 Hal Turner,
23 October, 2019
High-placed federal law enforcement sources dropped a bombshell, claiming the renewed push to impeach the president is rooted, in part, in President Trump’s move to pull the United States out of the conflict in Syria — and stop untold millions in dirty cash from flowing into the deep state’s pockets.
“This isn’t about the Kurds, it’s about the cash,” one FBI source said.
And that cash is no chump change; it’s millions and millions of dollars flowing into the coffers of crooked politicians and deep-state pockets worldwide.
But that profitable network could stop producing its riches for U.S. players if the cease-fire Trump negotiated continues and if Trump’s plan to remove U.S. personnel from Syria commences.
Back here in the U.S., Trump faces a new and angrier wave of angst from DC players and politicians who have launched an even more-rabid push to remove him from the White House.
“There’s panic,” one source said. “There are a lot of connected people making a lot of money through their contacts in Syria and that is going to dry up fast.”
Federal sources paint a dark picture here, alleging crooked politicians and their benefactors are fuming. For years, it is alleged, deep state players have been raking in millions in illicit profits through the manufacturing and distribution of narcotics in Syria.
The byproducts of such anxiety: Crooked U.S. politicians pushing fabricated allegations against Trump to impeach, ISIS prisoners being released by frustrated deep-state players as payback, and even an emergency Middle East road trip by speaker Nancy Pelosi and senior members of Congress to Jordan, which also happens to be a major trafficking route for Syrian drug distribution to Saudi Arabia, United Arab Emirates, and Iraq — some of the largest markets in the world for Syria’s meth pills.
Coincidence?
Trump has sabotaged a golden goose for the deep state, knowingly or not.
With the deep state dogging Trump with faux scandals in an attempt to remove him from the White House at every turn, you have to wonder if Trump’s foreign policy in Syria is targeting the millions of dollars that politicians and their deep-state connections are lining their pockets with, in the U.S. and other countries too.
The network, the money and the amount of illegal narcotics coming out of Syria are massive. Syria is supplying the entire Middle East with a very potent pill form of meth called Captagon. Syria’s Captagon is being trafficked through Europe and Africa. But Syria is also producing the ingredient to make other forms of meth worldwide, another Syrian product line being trafficked with huge profits even here in the United States.
Also, ISIS fighters are not only using this drug but their bosses are profiting from its distribution and using the proceeds to expand the global footprint of the terror conglomerate. That’s another wrinkle in this sordid, secret story.
The FBI and DEA have shared frustrations about fighting factions in the State Department to clamp down on millions of pills being manufactured in Syrian labs. Efforts to track and stop the worldwide distribution have resulted in a tug of war inside D.C. In June, the FBI tipped off Greek authorities about a Captagon shipment the U.S. Feds tracked out of the port of Latakia, Syria. The Greeks intercepted a shipment of lumber shrouding 33 million Captagon pills with a street value of $700 million.
“That’s one shipment worth $600 to $700 million,” one federal source said. “This is a multi-billion dollar operation.”
And Trump just shut it down for many U.S. players. Again, perhaps as a way to stick it to the same folks who are trying to take him down.
Regardless, we are getting a glimpse into a money war behind the political war unfolding in D.C. 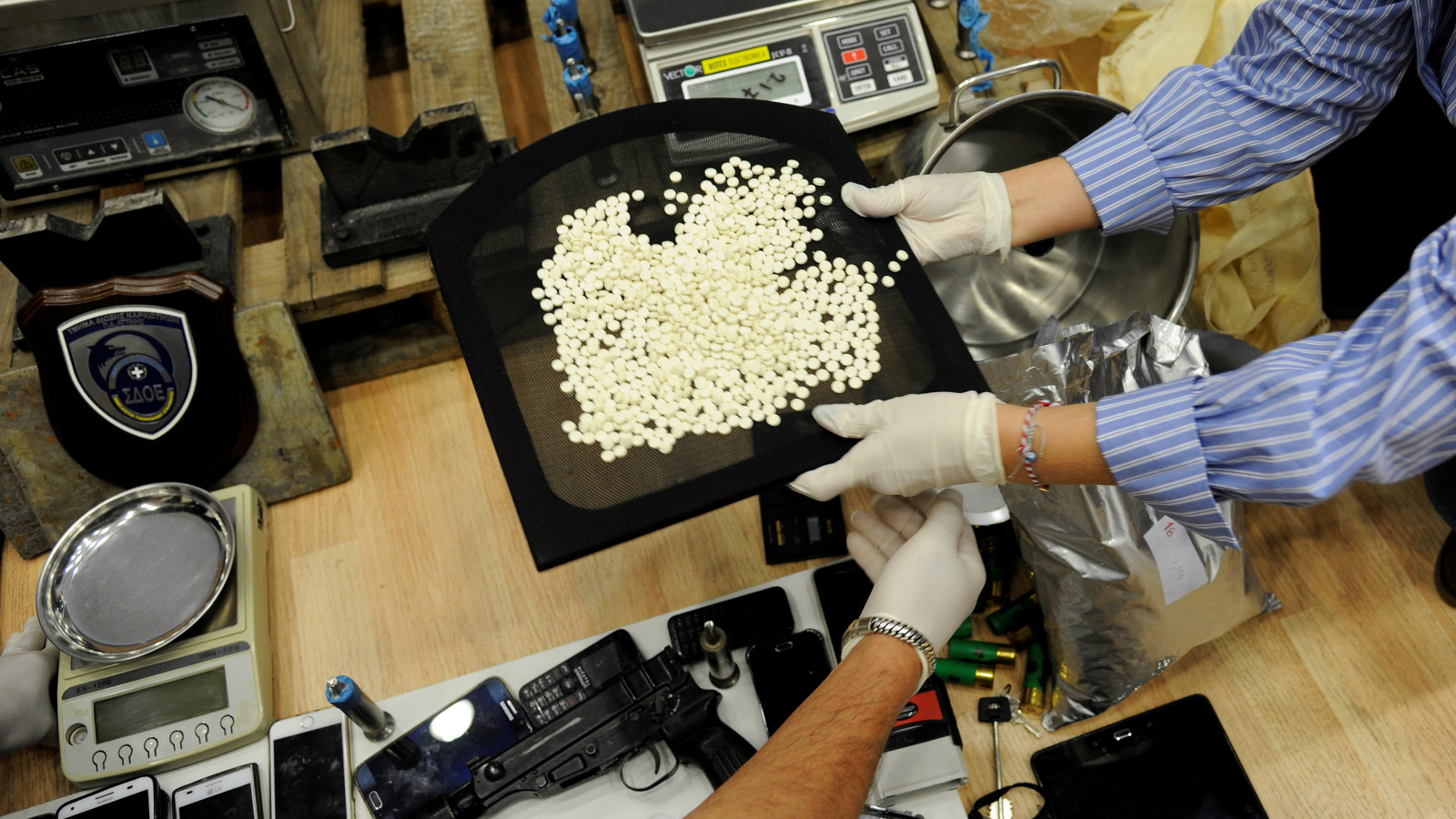 In December, a Syrian freighter en route from Latakia to Libya was intercepted near Crete with 3 million fenethylline pills worth $113 million. Syrian-made Captagon pills, known locally as Abu Hilalain — aka the father of two moons because each pill bears a logo of two crested moons — were impounded in France in 2017.
In 2016, the International Narcotics Control Board (INCB) flagged concerns after Syria’s import of pseudoephedrine, a legally traded nasal decongestant that can be used to make highly addictive and powerful methamphetamine, though not Captagon, skyrocketed. Tablets destined for Gulf countries are regularly seized in Lebanon — once from a Saudi prince — sometimes having been moved across the Syrian border. In Jordan, 47 million Captagon pills were reportedly confiscated in 2018, according to Jordan’s Public Security Directorate. And the Maryland-based National Center for Biotechnology Information now describes Syria as the “premier producer and exporter of counterfeit forms of Captagon.”
The drug, which gives a faster high than traditional amphetamine, has for years been a favorite among ISIS fighters. But its export from the country, through ports like Latakia that are controlled by the Bashar Assad government, suggests that the Syrian regime might now be turning to fenethylline sales internationally to bolster its treasury. At the very least, suggest experts, it might be allowing corrupt officials to carry out trade in the illegal substance to keep them loyal.
“It is plausible to think that with this amount of money involved, corruption and rent-seeking is a widespread practice,” says Maziyar Ghiabi, a lecturer at Oxford University and expert on Middle East drug politics. “And with shrinking sources of revenue, all the more logical.”
Captagon, Biocapton and Fitton were the brand names for drugs whose main active ingredient is fenethylline, which was legal in the U.S. until 1981, when its addictive properties saw it categorized as a Schedule 1 drug alongside heroin and cocaine. When legal in the 1960s and ’70s, it was used to calm hyperactive children and for patients suffering from narcolepsy and depression. By 1986, it was banned in most countries. Yet as with most narcotics, the ban only drove production underground, with southeastern Europe emerging as the manufacturing hub. Faced with increasing international pressure, production shifted to the Middle East after 2011. Until then, Syria had no history as a manufacturer or exporter of the drug — unlike Afghanistan, another nation at war that has been a poppy exporter for decades.
While the extent of the Syrian regime’s direct role in the export of the drug is hard to determine, a combination of the war, crippling international sanctions and the destruction of much of its regular economy have forced the government to look for new ways to make money. Werner Sipp, the INCB president, said in 2016 that “very high amounts of pseudoephedrine and other precursors ordered by Syria” had subsequently disappeared. He warned that narcotics from those ingredients might be manufactured and produced for exporting.” The INCB asked Syria for an explanation but hasn’t received one yet.
There’s a reason why fenethylline is Syria’s export of choice. It’s one of the most sought-after narcotics in the Middle East. In Saudi Arabia, the pill, which contains caffeine and quinine, a painkiller, is more popular than cocaine, weed, heroin or ecstasy. Captagon is also becoming increasingly popular in the United Arab Emirates, Qatar and North Africa. While a batch of 200 sells for about $70 in Lebanon, in wealthy Gulf states a single pill can fetch between $10 and $20.
According to a 2016 study published in the journal Basic & Clinical Pharmacology & Toxicology, three-quarters of people treated for drug addiction in Saudi Arabia are addicted to amphetamines, and almost all of those are Captagon users.
FUNDING OBAMA'S NEW MEGA-MANSION?
Barack and Michelle Obama may soon become Kennedy adjacent because we've learned they're in escrow for a remarkable, mega-expensive, Martha's Vineyard estate.
Multiple island sources tell us the Obamas are in escrow for the estate owned by Boston Celtics owner, Wyc Grousbeck. The former Prez and First Lady have been renting the house this summer and loved it so much, we've learned they made an offer. The property is listed at $14,850,000. Our sources say they're paying less, but we don't know how much. 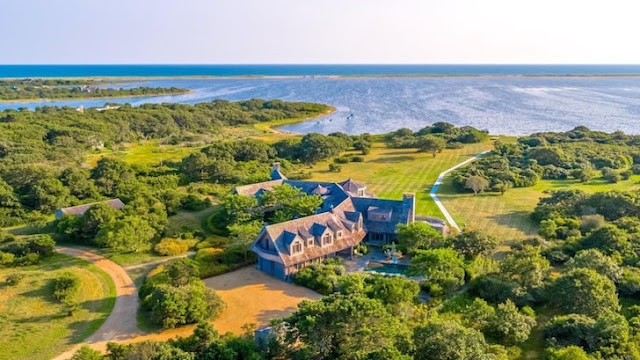 The estate -- incredible. It's 29 beachfront acres. The main residence is just shy of 6,900 square feet. It has 7 bedrooms, so Sasha and Malia have a place to crash, along with several of their friends. It has the obligatory pool, an outdoor fireplace, a chef's kitchen, vaulted ceilings and 2 guest wings. It has incredible views, especially while soaking in the second-floor balcony Jacuzzi.
The beachfront is private ... and comes with a boathouse.
Downside -- only a 2-car garage!!! Sorry kids.
The estate is listed by the realtors who dominate the area -- Tom LeClair and Gerret Conover. They did not return our calls.
The estate is currently in escrow and it's not a done deal just yet. We're told there are contingencies so it's possible it could fall apart, but we're told so far it's a go.
Readers should ask themselves a simple question: How did the Obamas, on a Presidential salary of $400,000 a year, manage to afford this $14+ Million estate, years AFTER he departed the Presidency? Did he make a ton of money "on the side" . . . with his war in Syria?
Here is a LINK to the Obama's federal Income Tax Return for 2015. They sure didn't have a whole lot of money other than his Presidential Salary heading into his final year in office.
So even if Obama managed to keep each and every cent he earned as President, over eight years that's only about $4 Million.   Where is the $14+ Million coming from to buy this new mega mansion?
PELOSI & SCHIFF . . .
It was reported TWO DAYS AGO, that Speaker of the House Nancy Pelosi flew to . . .  Jordan.    Gee, why would a high-level Democrat (who is trying to get Trump out of office) fly to Jordan?
Here's a map of Jordan: 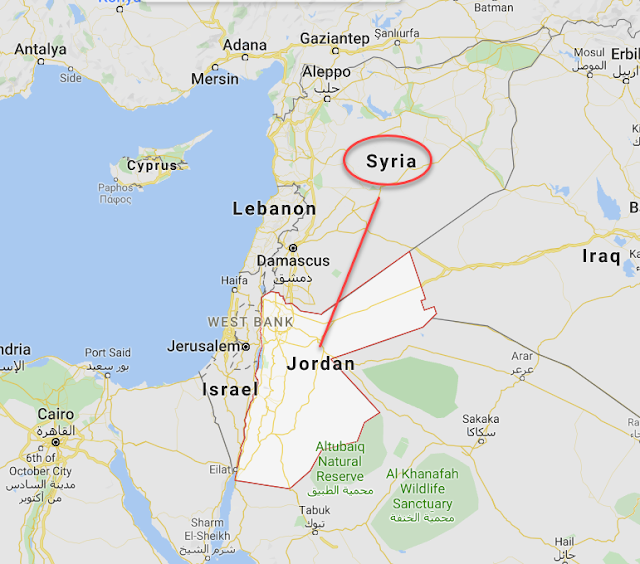 Look what Borders Jordan on the NORTH . . . Syria.
Here's the report proving she went there:
Is Pelosi in Jordan -trying to convince contacts around Syria to keep the drugs flowing, aka profits and kickbacks to Democrats?
What's that you say?  This is just a coincidence?
Maybe you're right.  Or not.
Because the other place that Pelosi also traveled to this week:  Afghanistan!  Yes, the Heroin production capital of the world (LINK)!
Here's Nancy's Tweet about being in Afghanistan for some . . . . noble cause . . . .  or something . . . .:

Nancy Pelosi ✔@SpeakerPelosi
Today, our bipartisan delegation completed a visit to Afghanistan focused on security, governance, & economic development. We return to DC strengthened with knowledge & inspired by the courage of our forces on the front lines during this critical time. https://www.speaker.gov/newsroom/102019-0 …

9,695 people are talking about this
Readers need to look at this reality and decide for themselves if our top politicos are personally profiting from the sales of illicit drugs, worldwide, and also ask themselves if these politicians are using the US Military to protect their drug operations?
HAL TURNER REMARK
I always ask people why - Why do they think POTUS is so hated all of a sudden when, before he ran for president, he was featured everywhere and there was none of this 24/7/365 constant vitriol. They don’t have an answer.


So I tell them it’s because he is stopping the drug and human trafficking and the pedos and he’s exposing those involved with it within our government, media and Hollyweird. I give them a few stats and end with “That is the REAL reason why they hate him and those who scream the loudest are the most guilty and have the most to lose”.It gives them a totally different perspective.