Donald Trump takes ALL the credit for Turkish cease-fire 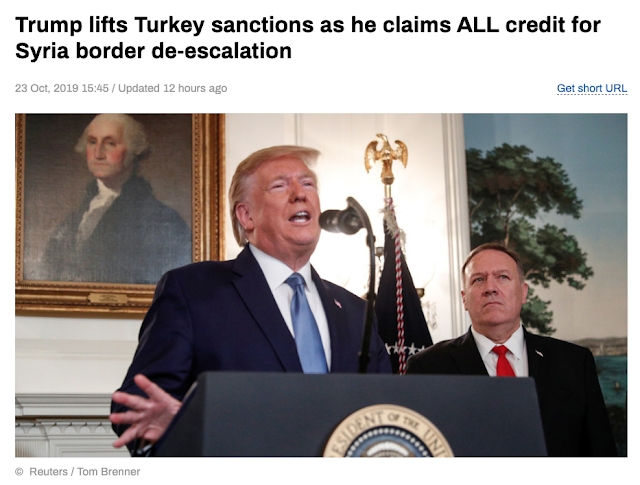 US President Donald Trump says he’ll lift sanctions on Turkey, unless he’s “not happy” with its actions in northern Syria, as he took complete credit for “saving” of Kurds, claiming the outcome was created by “no other nation."

Trump said Turkey had confirmed that it would make an earlier five-day ceasefire permanent and that it was holding "very well" so far.


He said the US would welcome the help of other countries in dealing with the conflict, adding that a "small number" of US troops would remain in the area "where they have the oil."


Minutes after the speech, the US Treasury said it removed sanctions imposed on the Turkish ministries of defense and energy.

Praising his pressure campaign against Ankara, Trump went as far as claiming that "no other nation" was responsible for bringing an end to the Turkish operation. But Turkish President Recep Tayyip Erdogan in fact made the decision not to launch a new offensive against Kurdish militias after lengthy talks with Russian President Vladimir Putin in Moscow on Tuesday.


While Washington threatened to use force against its NATO ally Turkey, Moscow chose to decrease tensions with a diplomatic approach. The agreement reached with Putin provides for the withdrawal of Kurdish forces from a border zone, where Syrian Army troops and Russian military police will take on the role of border guards. For the time being, Turkey will be allowed to keep the territory it seized during its operation.

Russia's Defense Ministry said Wednesday that it's own military police base may be set up near the town of Kobani, as part of the deal. The military police will help facilitate the withdrawal of Kurdish forces from the area around 30km from the Syria-Turkey border.

When bureaucrats and officials, also known as the Borg, contradict the foreign policy of the president they inevitably create chaos. We yesterday explained how that happens:

Since Donald Trump became president many of his subordinates have tried to subvert his policies. Instead of implementing Trump's idea and preferences they have tried to implement their own. Some have done so because they believed that it is the "right thing to do" while others have ignored Trump's wishes to play their own game.

Trump was smart enough to circumvent the Borg with regards to northeast Syria. This led to the removal of U.S. troops and the Turkish-Russian agreement which is an excellent outcome for all sides.

b, I've been a participant at this site for 14yrs, and I don't believe I've ever seen your take on any subject more "off base", than your take on DJT.

This "man" has never been anything else but a grifter and giant con. Virtually everything he has done, he's done to enrich himself and his family. That is, besides deconstruct the U$ govt. to enrich his class of people, (the malignantly rich) by dialing back regulations that protect everyday Americans from the greed of the mega-corporations.

He's a sycophant for the corporate monsters who now own the U$A. Anything and everything he's done, isn't because he is such an egalitarian, it's for his personal enrichment, and the monsters he works for.

When they're done with him, they'll throw him under the bus, just like all the rest of us...

I agree with ben's characterization of Trump. I dislike most of his policies. But that does not change the fact that Donald Trump is the elected president of the United States and that he is thereby entitled to direct its foreign policies as he sees fit.
Ben's and my opinion about Trump do not invalidate the point I made. Trump policies, especially in international relations, are getting sabotaged or co-opted by the Borg, the unelected establishment in the various departments and think tanks. This is a dangerous phenomenon that, more or less, hinders every elected president, especially those who want to make peace. It should be resisted.
The people in leading positions of the executive work "at the pleasure of the president". Their task is to execute his policies. When they refrain from doing so or implement their own preferences they create a mess.
Consider two additional examples, both published yesterday, which describe how James Jeffrey, the Special Representative for Syria Engagement, tried to sabotage Trump's decision to leave Syria and, while doing that, misled the Kurds:

A State Department official told a senior Syrian Kurdish leader during a meeting in Washington that the United States would not fully withdraw its forces from northeast Syria and advised her administration not to engage with Bashar al-Assad’s government or with Russia.

According to two sources familiar with the Monday, October 22 meeting, a senior member of Washington’s diplomatic team is said to have become angry and told Ilham Ahmed, President of the Executive Committee of the Syrian Democratic Council, that the U.S. will not allow the SDC to arrange a deal with the Assad regime or Russia for protection against the Turkey-led attack.
...
SDC officials told The Defense Post that American officials in the past have promised they would not withdraw U.S. forces until a political settlement was in place to secure their future in the Syrian political system.

Trump had long announced that the U.S. military will leave Syria. He had made no promises to the Kurds. The State Department official did not do his job but contradicted Trump's policies.
Another report on an earlier State Department meeting with the Kurds paints a similar picture:

The National Interest has learned from multiple sources about tense meetings between SDC diplomats and State Department officials who oversee the Trump administration’s policy on Syria. The State Department repeatedly pushed for the SDC to work with Turkish-backed Islamist rebels while berating Syrian Kurdish officials and refusing to listen to their concerns, according to multiple sources.

One source with firsthand knowledge of the screaming session told the National Interest that Deputy Assistant Secretary of State Joel Rayburn, who is a special envoy for Syria, yelled at SDC officials and broke a pencil in a translator’s face. Two sources with secondhand knowledge confirmed this version of events.

“[Rayburn] loves the Syrian Islamist groups,” one of the three sources said. “He thinks they can counter Iran. He is dreaming.”

“He is pushing [the SDC] to meet with jihadists,” the source added.

To tell the anarcho-marxist YPG/PKK Kurds to unite with Erdogan's Jihadis is an absolutely crazy idea. Neither the Kurds nor Erdogan would ever agree to a partnership. These were impossible policies. They made no sense at all.
Jeffrey and his shop clearly worked against Trump's orders and against U.S. interests. Jeffrey clearly favors Turkey where he once worked as U.S. ambassador and, above all, Israel:

In addition to the uptick in tense verbal exchanges, the three different sources described to the National Interest how State Department officials attempted to condemn the brutal murder of Kurdish-Syrian politician Hevrin Khalaf only to have their efforts waylayed by Ambassador James Jeffrey, who oversees anti-ISIS efforts. Jeffrey blocked the statement, they said.
...
Now, even as U.S. troops are stepping aside to allow Turkey to attack U.S.-backed Syrian Kurdish forces, Jeffrey’s team is floating plans to peel off Arab components of the Syrian Democratic Forces to build a counter-Iran force far from the Turkish border.

It is Jeffrey who is pressing for a continued U.S. occupation of Syria's oilfields. These are not Trump's policies, but contradictions to them.
Aymenn Al-Tamimi makes a similar point:

When [Trump in December 2018] told his advisers that he wanted to withdraw U.S. forces from Syria, he meant it. The message should have been clear: devise an orderly withdrawal plan.

But that is not what happened. Instead, efforts and attention were geared towards U.S. forces remaining indefinitely in Syria.

One can criticize Trump for not selecting advisors and envoys who follow his directions. But Trump is a New Yorker businessman and not a politician with decades of experience in Washington. He does not know who he can trust. He has to proceed by trial and error until he finds people who are willing to go work with him against those permanent powers that usually drive U.S. foreign policy.
In a congress hearing yesterday James Jeffrey admitted (vid) that Trump did not consult him before his phone call with Erdogan.
By going off-scrip in that phone call and by greenlighting the Turkish invasion Trump achieved - despite the resistance within his own administration - a win-win-win-win situation in Syria:

Erdogan could show that he was fighting against the PKK terrorists and prevented their attempts to become a proto-state. Trump could hold his campaign promise of removing U.S. troops from useless foreign interventions. Syria regained its northeast and the important economic resources of that area. Russia gained global prestige and additional influence in the Middle East.

We will have to wait for Trump's (and Putin's) memoir to learn how much of this has been coordinated behind the scenes.
I for one count this as a major foreign policy achievement for Trump and I am happy with this outcome.