The attack which cut Saudi oil production in half: the main headlines - 15 September, 2019

This is hot through the wires 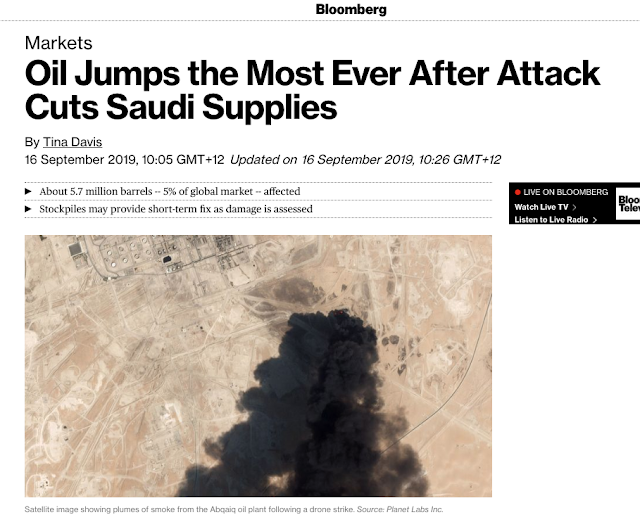 Brent crude surged the most on record after a drone strike on a Saudi Arabian oil facility removed about 5% of global supplies.

The benchmark oil futures jumped as much as $11.73 a barrel to $71.95 as the market opened Monday in Asia, the biggest jump in dollar-terms since futures started trading in 1988. State energy producer Saudi Aramco lost about 5.7 million barrels per day of output on Saturday after 10 unmanned aerial vehicles struck the world’s biggest crude-processing facility in Abqaiq and the kingdom’s second-biggest oil field in Khurais.

This is just to remind you of what this is about. If the Saudis want the Houthis to stop attacking them they could stop bombing Yemen and starving its children. 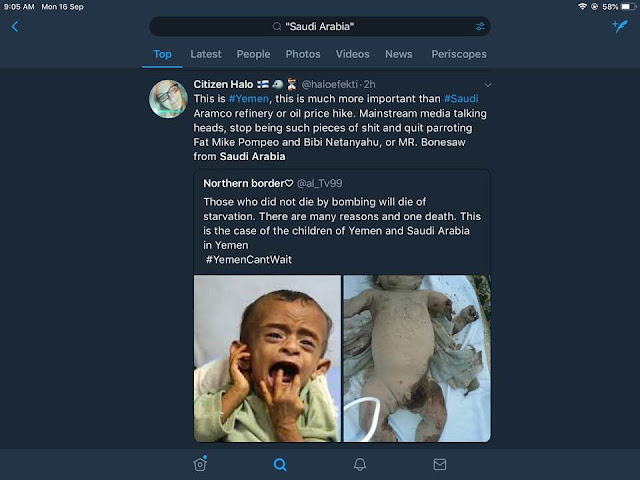 Steven Lookner provides good, timely coverage but is strongly biased towards the US/Israel.Saudi position as far as I can see. 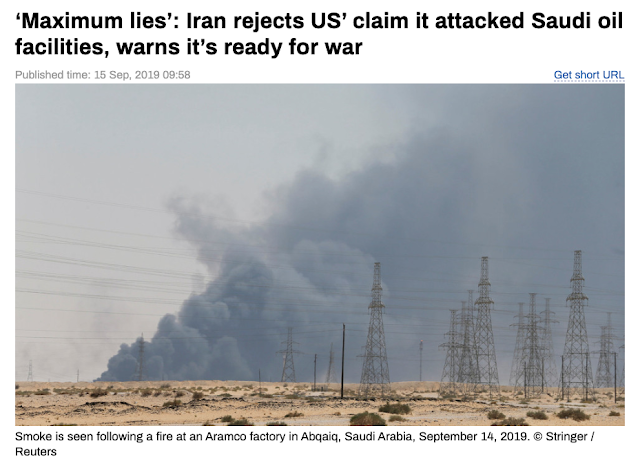 Iran has rebuffed US accusations of launching a drone attacks that cut Saudi Arabia’s oil output in half. A senior Islamic Revolutionary Guard Corps commander, meanwhile, has warned Washington that Tehran is ready for war.


Allegations that Iran was behind the drone attacks on Saudi oil facilities are “unsubstantiated” and false, Foreign Ministry spokesperson Seyyed Abbas Mousavi stated on Sunday. He also said officials in Washington are accusing Iran in order to tarnish its image on the world stage in preparation for “future actions” against Tehran.

The Americans adopted the ‘maximum pressure’ policy against Iran, which, due to its failure, is leaning towards ‘maximum lies’ 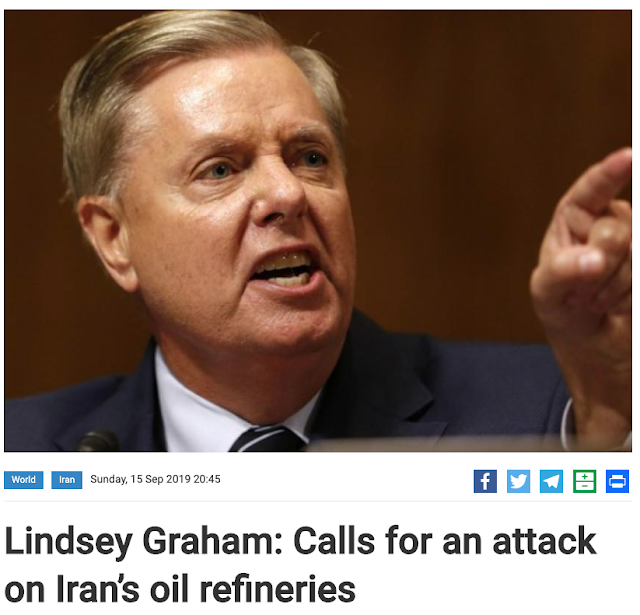 Houthi militia an Islamic Republic of Iran’s proxy Shia militia group has accepted responsibility for the attacks on Saudi facilities, but the US Secretary of State Mike Pompeo has directly blamed Iran for this attack.

Iranian officials have denied any role in these attacks.

The attack on the two Aramco facilities in Saudi Arabia led to fires which were contained immediately.

The oil refinery in Buqayq province can produce seven million barrels per day. The facility was once before targeted unsuccessfully by Al-Qaeda in 2006.

Last month, Houthis of Yemen executed similar drone attacks against Saudi facilities, and in May, they targeted two other Saudi oil facilities.

Tensions have risen in the Persian Gulf after the attacks on several oil tankers near the Strait of Hormuz. American and several Arab countries blame Iran for these attacks. Iran's regime denies the allegations, however, the Islamic Republic officials in the past have repeatedly threatened to block the Strait of Hormuz if Iran cannot sell its oil due to sanctions. 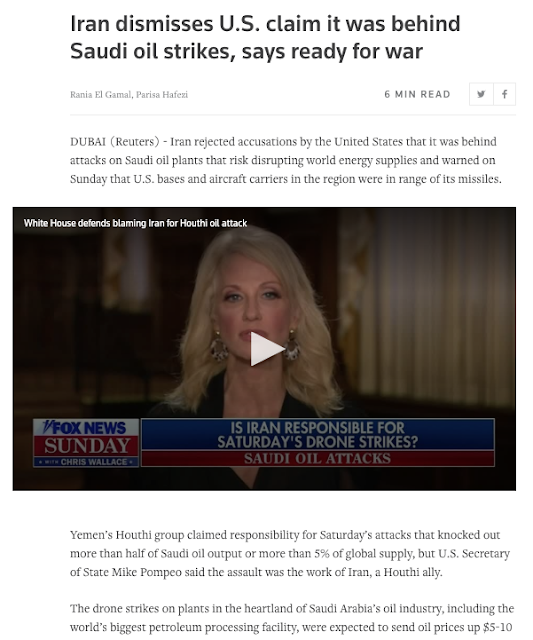 https://www.reuters.com/article/us-saudi-aramco-attacks-idUSKBN1W009P?fbclid=IwAR3NklmnKjNohA0rQuhoUV8QA6wJ5DKVDl0ol1XBNhGj5cC6JetqFccK2KI
These are the latest pictures out, showing the extent of the damage 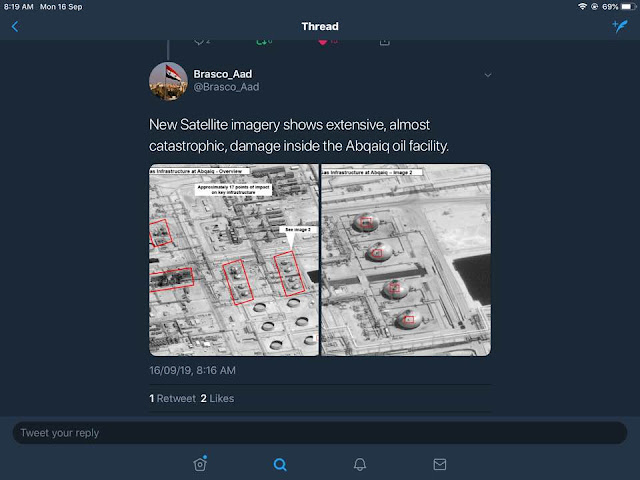 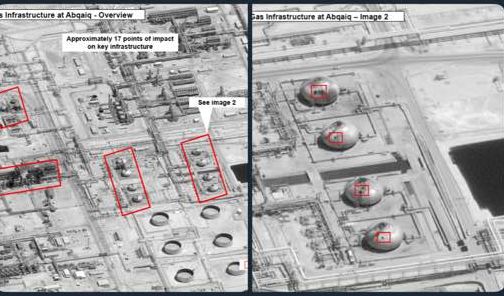 Here is some coverage from Iran's Press TV.

This has been described as a "threat". It seems to me he is just pointing out some facts. The threats come from the United States, Israel and Saudi Arabia.


'
A top commander of #Iran's Islamic Revolution Guards Corps (#IRGC) says the #US military bases in the region as well as its warships and other vessels are within reach of Iranian missiles up to a radius of 2,000 kilometers. Brigadier General Amir Ali Hajizadeh, the commander of the IRGC's Aerospace Division, made the remarks in a televised talk show on Sunday. 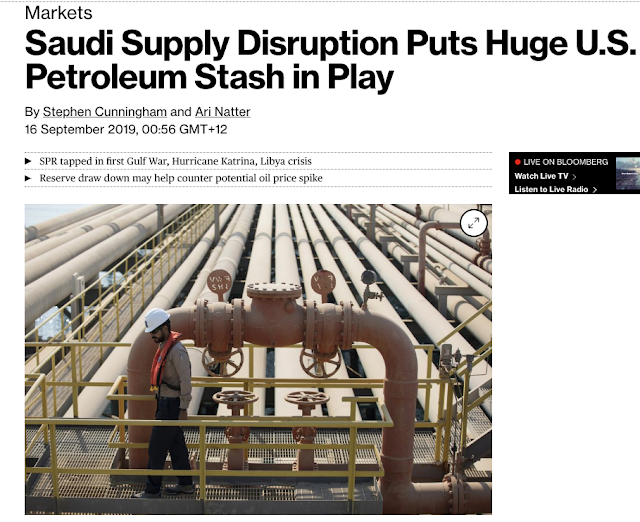 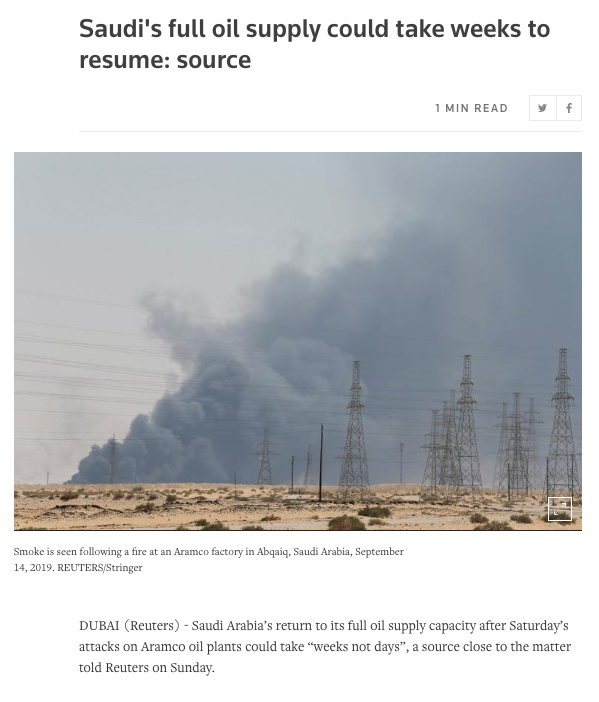 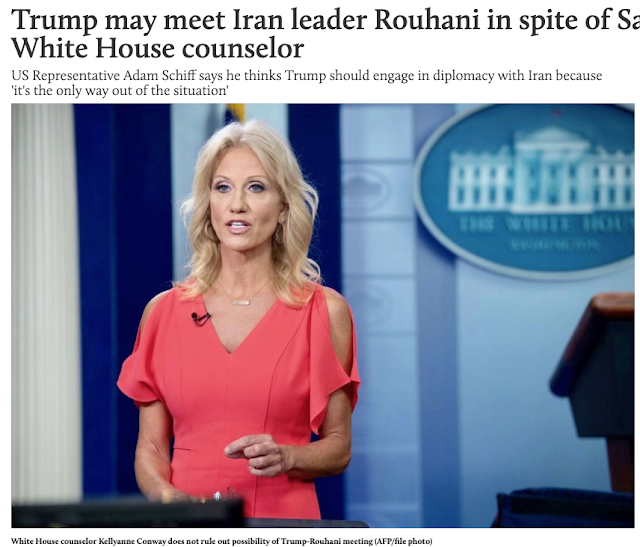 The White House said on Sunday that President Donald Trump may still meet his Iranian counterpart, Hassan Rouhani, despite the US accusing Iran of masterminding drone attacks on Saudi Arabian oil facilities.

White House counselor Kellyanne Conway did not rule out the possibility in a television interview broadcast as Saudi Arabia raced to restart operations at oil plants hit by drone attacks that slashed its production by half, AFP reported.