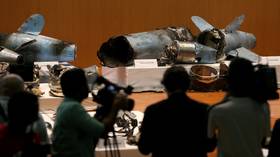 Saudi Arabia wants its allies to believe Tehran launched attacks on its oil facilities, even though the one thing their evidence proves is the Iranian-made arms. Even so, Donald Trump will unlikely greenlight a war against Iran.

‘Made in Iran’ is not ‘launched by Iran’

The possibility that Iranian-made missiles were used in the attack on the Saudi oil plants isn’t a huge revelation, Viktor Murakhovsky, military analyst and editor-in-chief of Arsenal of the Fatherland magazine, told RT.

Showcasing the wreckage from the missiles and drones that struck Abqaiq and Khurais facilities might have proven this point, but those were identified as soon as first photos of the debris emerged in wake of the strikes. Iran has developed such “long-range cruise missiles” on the basis of Soviet Kh-55 missile, which it bought from Ukraine in early 2000s, Murakhovsky said.

But it doesn’t prove in any way that Tehran had anything to do with the attack and that the strikes [on Saudi petrol plants] originated from the Iranian territory.

Despite the attack being claimed by the Houthi rebels in Yemen, Riyadh on Wednesday insisted that it couldn’t have been launched from Yemeni territory and was “unquestionably sponsored by Iran.” One of the arguments made was that the Houthis were not capable of carrying out such an attack. Murakhovsky disputes this.

“There’s no secret that Iran supplies weaponry and military hardware to the Houthis in Yemen and cruise missiles could’ve well been among those deliveries,” he said. If so, such missiles are “not difficult” to operate and the Houthi forces didn’t need any help from Iranian specialists to carry out the attack on their own, the military expert said.

What the Saudi report basicaly says is that “the weaponry could’ve been supplied, and probably was, by Iran in exactly the same way that [the UK] and others have suppled arms to Saudi Arabia, which had been used in this four-year war against Yemen,” Matthew Gordon-Banks, former British MP and senior research fellow at the UK Defense Academy, told RT.

But by coming up with accusations against their main geopolitical rivals in Tehran, Riyadh “tends to expect the US to do its dirty work for them” – meaning a retaliatory strike on Iran.

However, they are unlikely to achieve their goal as US President Donald Trump knows that “no matter what his advisors may say, a strike against Iran could have devastating consequences throughout the Gulf and internationally.”

Iran is a “strong, self-sufficient country, with large territory and capable military,” and this means no rash moves from Washington should be expected before the 2020 election, Aitech Bizhev, former Deputy Commander of the Air Force for the CIS, said.

“The majority of those, who voted for Trump don’t want war,” Bizhev added, suggesting that the US will continue sanctioning Tehran and will only resort to cold war moves aimed at maintaining tensions in oil-rich Persian Gulf. 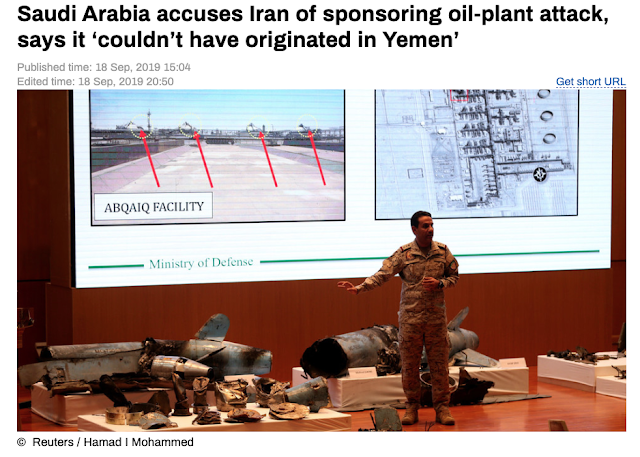 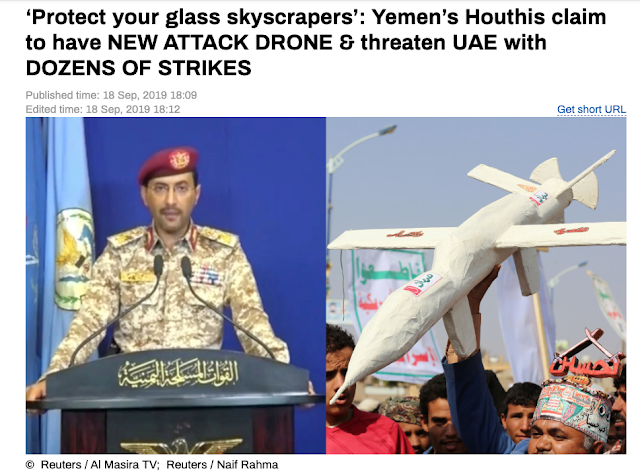 Aramco Attacks An "Act Of War" By Iran: Pompeo After Arriving In Jeddah

What's the end game here? Secretary of State Mike Pompeo has just arrived in Jeddah for talks with Saudi leaders over a response to the weekend attacks on two of the kingdom's major oil facilities.

After a prior press conference by the Saudi Defense Ministry where it for the first time assigned public blame on Iran for the attacks which initially knocked out half of the kingdom's daily oil output, saying the air attacks "unquestionably" had Iranian state sponsorship, Pompeo has announced the Aramco attacks constitute an "act of war" by Iran. 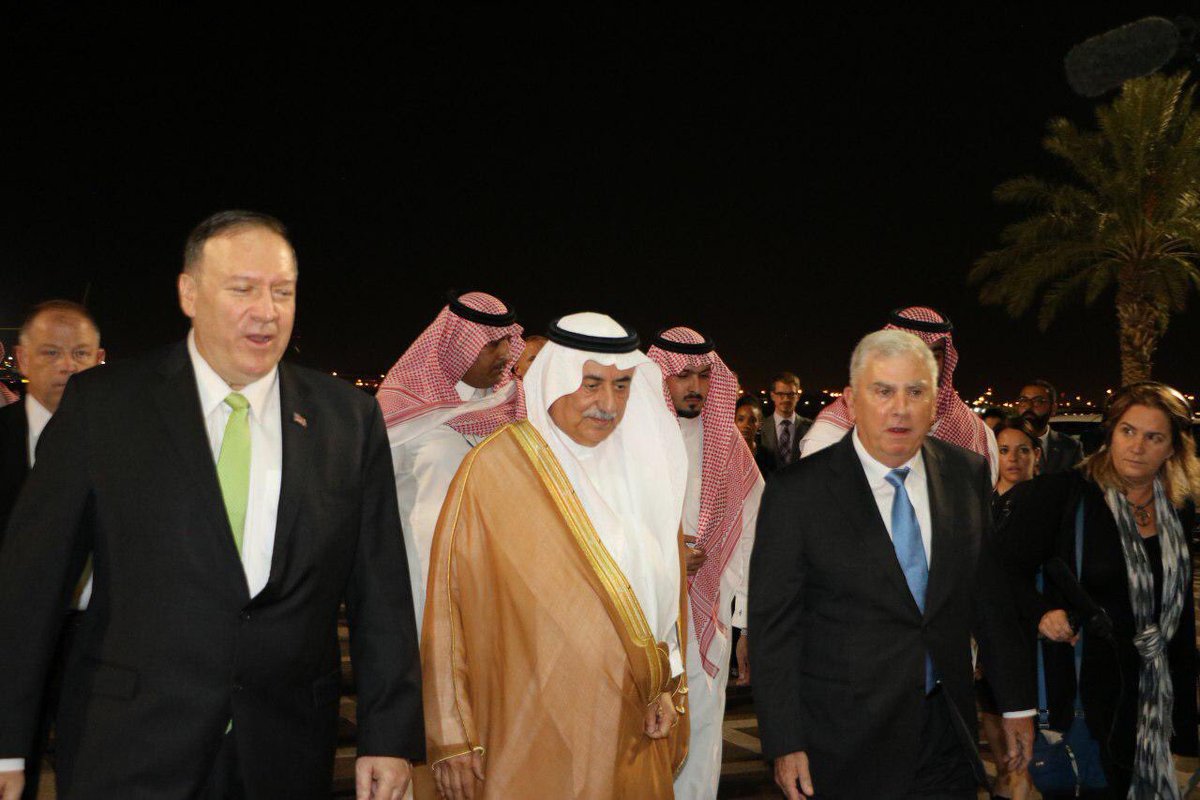 And President Trump himself said Wednesday from the White House that it looks like Iran did it but that he still hopes to avoid war.

He announced via a statement on Twitter that, "I have just instructed the Secretary of the Treasury to substantially increase Sanctions on the country of Iran!" — in what appears an alternative to launching a military response.


"I'm not looking to get into new conflict, but sometimes you have to," Trump told reporters Wednesday.

Pompeo is in Jeddah where he's expected to meet with Saudi Crown Prince Mohammed bin Salman to evaluate a possible response and to "coordinate efforts to counter Iranian aggression in the region," according to a State Department statement.

"We were blessed that there were no Americans killed in this attack but any time you have an act of war of this nature, there’s always risk that that could happen,” Pompeo said.

“This is an attack of a scale we’ve just not seen before,” he added later speaking to reporters off-camera just before landing in Jeddah.

Meanwhile, if the 'military option' is being considered, it appears we could be in the beginning phases of an international coalition response. UK Prime Minister Boris Johnson announced he and Trump held a phone call to discuss the need for a "united diplomatic response from international partners" after the Aramco attacks.


The fact that Johnson's statement included the word "diplomatic" - along with Trump's emphasis on extending stronger sanctions - is a good sign however, that the White House is not prepping for war.

Below is the transcript of Pompeo's statements where he described “an Iranian attack” that was an “act of war” via CNN: 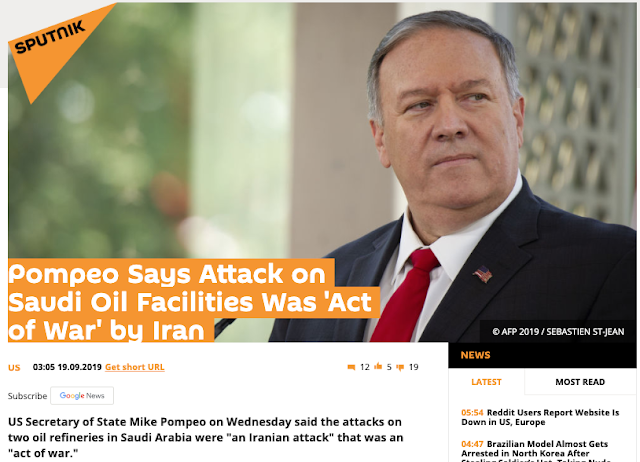 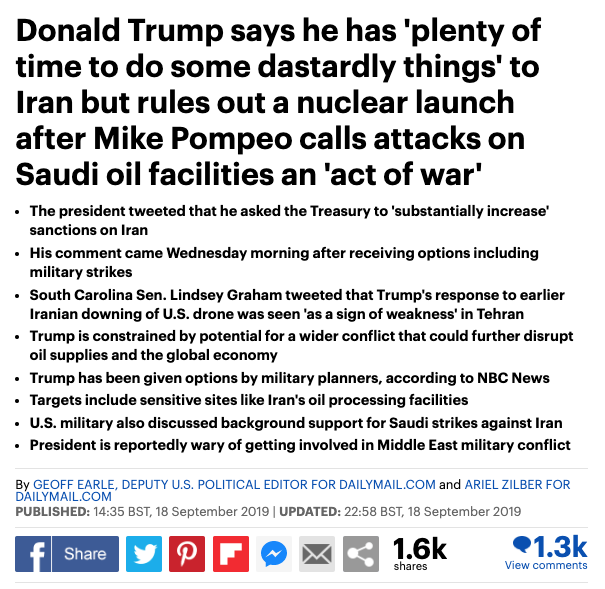 https://www.dailymail.co.uk/news/article-7477605/Donald-Trump-says-asked-new-sanctions-against-Iran.html
Posted by seemorerocks at 14:15