This segment is well worthwhile watching. It gives a clue to the current atmosphere in Moscow.

It looks as if the Americans have successfully cut off any possibility of negotiations through their actions.

From the UK's Daily Mail 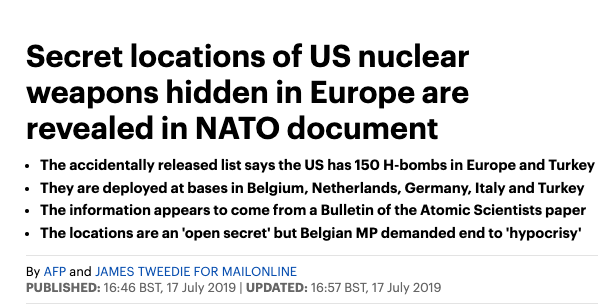 The secret locations of US nuclear weapons hidden in Europe have been revealed in a NATO document.

A draft report for the NATO parliamentary assembly's defence and security committee seen by AFP gave details of six air bases in Europe and Turkey where it said the US stores 150 nuclear weapons, specifically B-61 gravity bombs.

The news comes amid fears of a new nuclear arms race in Europe, as a landmark Cold War treaty between Moscow and Washington is on the brink of collapse. 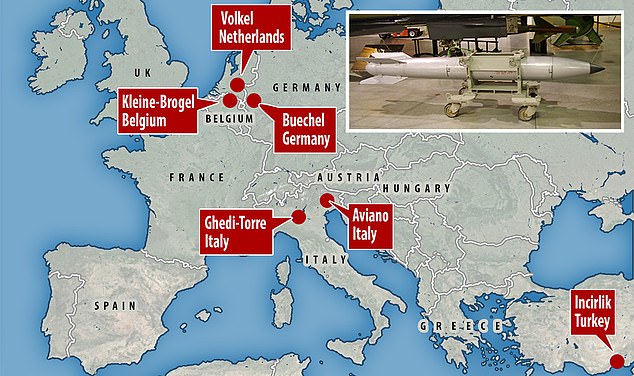 Green MP Samuel Cogolati said the report confirmed the 'open secret' that US nuclear weapons were stationed at the Kleine-Brogel air base in northern Belgium.

'We demand a fully transparent debate - we must stop this lying and put an end to this hypocrisy,' he told AFP.

A section of the draft report by Canadian senator Joseph Day, refers to a total of 'approximately 150 nuclear weapons' stored at Kleine-Brogel in Belgium, Buechel in Germany, Aviano and Ghedi-Torre in Italy, Volkel in the Netherlands and Incirlik in Turkey.

The report, titled 'A New Era for Nuclear Deterrence? Modernisation, Arms Control, and Allied Nuclear Forces' was written in April and then amended last week to remove the detailed references to the air bases.

The information appears to come from an annual paper on US nuclear forces in the Bulletin of the Atomic Scientists, which gives details of the reported locations of all American nuclear warheads.

The United States is one of three atomic powers in NATO, along with Britain and France, and although the nulcear threat is a key part of its deterrence strategy, the alliance routinely refuses to discuss it in detail.

The alliance distanced itself from the report, with an official stressing that it was 'not an official NATO document'.

An official said the alliance would not comment on nuclear matters.

'The document quoted is a draft report by parliamentarians of NATO countries, who come together under the NATO Parliamentary Assembly.'

In the late 1980s a Belgian minister acknowledged the presence of US nuclear weapons at Kleine-Brogel, which lies some 90 km (55 miles) northwest of Brussels, near the Dutch border.

But no details have been given before of the number of warheads or how they could be used.

The report says the B-61 bombs can be carried by 'both US and Allied dual-capable aircraft', though they can only be used with the authority of the US president.

NATO's 'nuclear sharing' policy has long been controversial. Critics say it breaches the 1970 Treaty on the Non-Proliferation of Nuclear Weapons.

Weighing just 700lbs (320kg) in its basic configuration, it can be carried by any NATO bomber or strike fighter, including the F-15, F-16, Eurofighter Typhoon, F-22 Raptor and F-35 Lightning II.