Russian Navy frigate arrives in Cuba under US observation 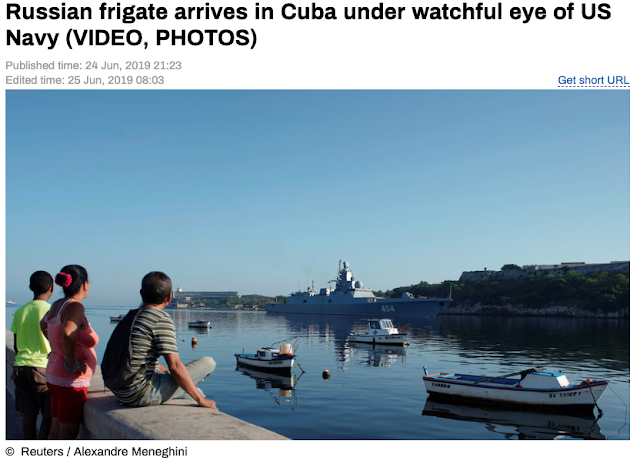 A Russian Navy frigate armed with cruise missiles has arrived in Havana Harbor for an official visit. As Russian seamen stretch their legs on shore, US warships idle nearby and quietly observe their counterparts.
The frigate Admiral Gorshkov, armed with Kalibr missiles, left the Russian port of Severomorsk in late February for its months-long voyage, making stops in China, Djibouti and Sri Lanka before docking in Cuba on Monday. It is accompanied by several support vessels. 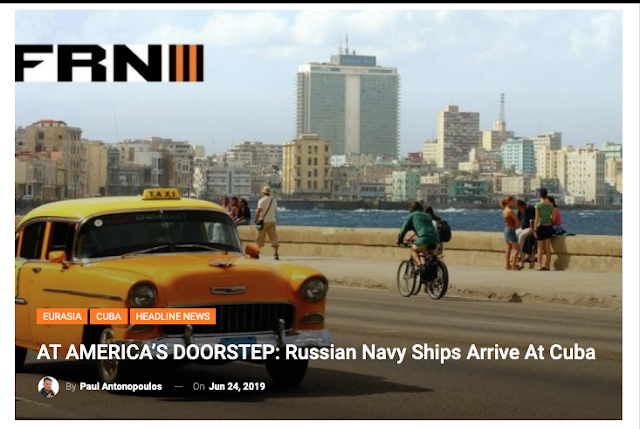 A group of Russian ships from the North Fleet, led by the Admiral Gorshkov frigate, approached the coast of Cuba, said North Fleet spokesman Vadim Serga.
“The group of North Fleet ships headed by the Admiral Gorshkov frigate approached the coast of Cuba. Today the Russian sailors will make a working visit to the capital of the republic – the port city of Havana, with the Elbrus logistic vessel and the tugboat Nikolai Chiker. The average offshore tanker Kama continues its voyage to the eastern Caribbean Sea to the islands of Trinidad and Tobago,” he said.
It was reported that the detachment of ships left for the long voyage from Severomorsk on February 26. Since the beginning of the voyage, the ships and support vessels of the detachment have traveled about 28 thousand nautical miles.
It is reported that during the voyage the Russian sailors made stops at the ports of Djibouti and Colombo as well as at the Chinese port of Qingdao to participate in the celebrations of the 70th anniversary of the People’s Liberation Army of China.

Meanwhile, the hydrographers of the Russian North Fleet intend to confirm assumptions about the existence of new islands and map them during the Arctic expedition in 2019.The festivities of May were spent in Vladivostok, then they crossed the Pacific Ocean, crossed the equator and made a stopover in Puerto Bolívar, Ecuador. Last week, the detachment passed through the Panama Canal to the Caribbean Sea.
“There are six or seven islands whose existence must be confirmed during the expedition, most of which are supposed to be more than 500 meters long,” Aleksei Kornis, head of the Hydrographic Service of the Fleet, quoted by Izvestia.
According to Kornis, these are islands in the archipelago of Nova Zembla. The assumptions about its existence arose following the analysis of satellite images and data from other expeditions.
“However, the islands are only considered officially discovered when they are trodden by surveyors. It is necessary to establish how these structures are permanent, if, for example, are not part of a glacier,” said Kornis.

https://www.fort-russ.com/2019/06/at-americas-doorstep-russian-navy-ships-arrive-at-cuba/
Posted by seemorerocks at 20:33