Theresa May clings on to power 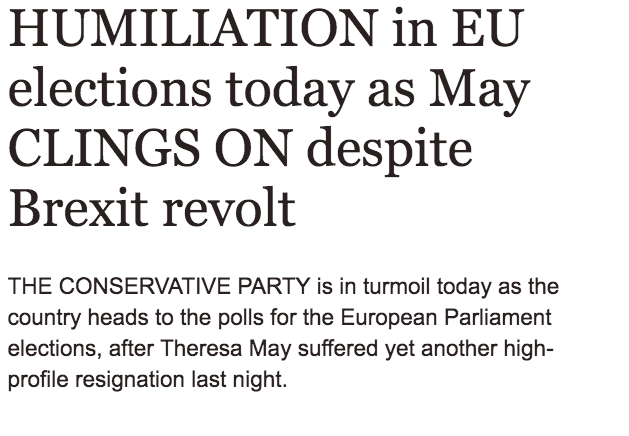 Andrea Leadsom resigned as Leader of the House of Commons last night in protest at the Prime Minister’s pledge to give MPs a vote on whether to hold a second EU referendum. The Brexiteer’s decision to quit the Government comes as a hammer blow to the Pirme Minister, who is facing fresh calls to also quit or face being forced out. Mrs May announced this week she was softening her stance on a second referendum and customs arrangements in a desperate bid to convince MPs to approve her Brexit deal, after they rejected her previous three attempts

But Mrs Leadsom, Leader of the House of Commons, said she could not announce the new Withdrawal Agreement Bill in Parliament today, as she did not believe in it.

The South Northamptonshire MP said in her damning resignation letter to Mrs May: “I no longer believe that our approach will deliver on the referendum result.

“It is therefore with great regret and with a heavy heart that I resign from the Government.

“I have always maintained that a second referendum would be dangerously divisive, and I do not support the government willingly facilitating such a concession.

“No one has wanted you to succeed more than I have.

“But I do now urge you to make the right decisions in the interests of the country, this government and our party.”

A Downing Street spokesman praised Leadsom and expressed disappointment at her decision.

They also said: “The Prime Minister remains focused on delivering the Brexit people voted for.”

Ian Lavery, chair of the opposition Labour party, said the resignation showed that “the prime minister’s authority is shot and her time is up”.

He said: ”For the sake of the country, Theresa May needs to go, and we need an immediate general election.”

Mrs Leadsom’s decision to quit came on the eve of today’s European elections, which are expected to provide humiliating results for the Tories after their failure to deliver Brexit by the March 29 deadline originally promised by Mrs May.

The results of the EU elections are not expected until Sunday evening, as most other EU member states will cast their votes but polling data from Pollsters collected April 15 to May 15 shows the Conservatives are likely to get their lowest ever share of the vote in a nationwide ballot.

Mrs May announced this week she would hold a vote on a second referendum (Image: PARLIAMENT LIVE)
They could even slip into fifth place behind the Greens.

The Brexit Party is on course to win around 29 of the UK’s 73 seats, which will win them at least one MEP in every voting region apart from Northern Ireland.

Labour is expected to get around 18 seats, while the Conservatives may just get six seats.

Following the latest demands from Conservative MPs for Mrs May to stand down as Prime Minister, the Tory leader will meet Sir Graham Brady, the chair of the influential 1922 backbench MP committee, on Friday.

Mrs Leadsom, Leader of the House of Commons, said she could not announce the new Withdrawal Agreement Bill

Mrs Leadsom, Leader of the House of Commons, said she could not announce the new Withdrawal Agreemen (Image: GETTY)
She has previously agreed to set out the timetable for the contest to replace her after another vote on her Brexit deal, which is expected on June 7.

But this may now change following the announcement she will meet Mr Brady the day after polling day for the European elections.

Mr Brady said to reporters: “I will be meeting with the Prime Minister on Friday following her campaigning in the European elections tomorrow and following that meeting I will be consulting with the 1922 executive.”

It is widely expected that if Mrs May fails to resign on Friday the 1922 Committee’s executive will consider a rule change to allow another attempt to force Mrs May out.

Under the current rules Mrs May would be safe from another confidence motion until December this year, after she survived a vote in December 2018.

The Telegraph from behind a paywall 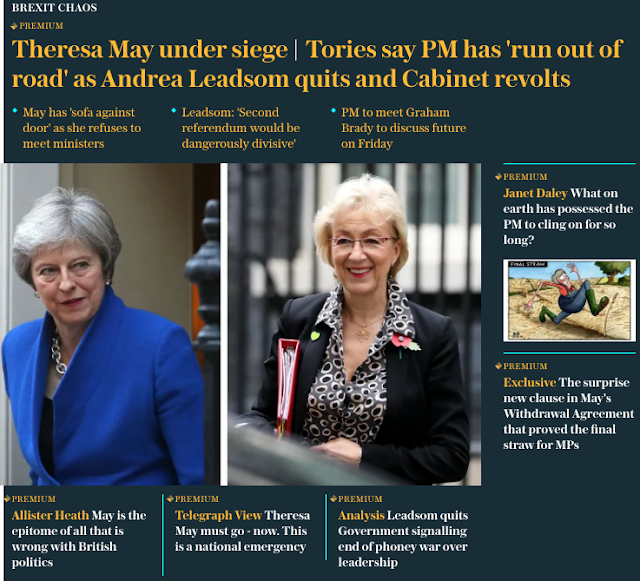 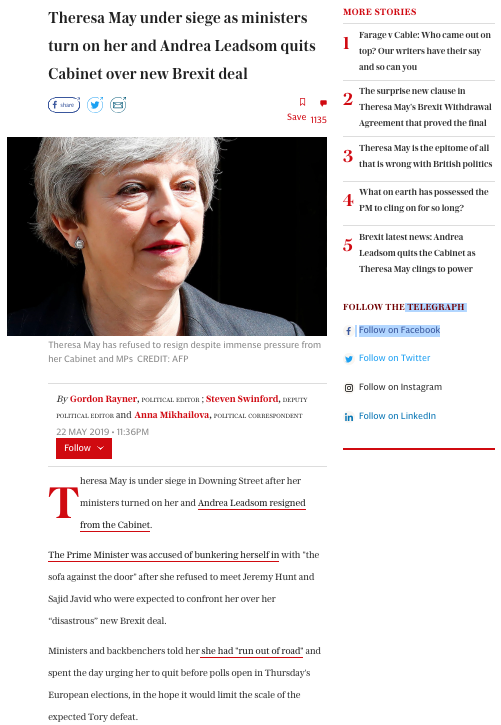 NO ONE can get to the essence of things quite like a comedian!

https://www.dailymail.co.uk/news/article-7057489/Tories-slump-just-7-CENT-eve-European-elections.html?ns_mchannel=rss&ns_campaign=1490&ito=1490
Posted by seemorerocks at 16:10