Cyclone Oma to reintensify to Category 2 system: ‘Double the size of Debbie’

Experts warning Cyclone Oma is already “double the size of Debbie” — one of the most dangerous cyclones to ever form in Australia.

Cyclone Oma is set to reintensify to a Category 2 system with experts warning it’s already “double the size of Debbie” — one of the most dangerous cyclones to ever form in Australia.
Bureau of Meteorology Queensland state manager Bruce Gunn said Cyclone Oma has weakened to a low pressure system but that it was forecast to reintensify to Category 2 strength and maintain its force for some time as it sits off the state’s southeast coast.
“It’s approximately twice the diameter of Cyclone Debbie,” Mr Gunn said.
“We will certainly continue to keep a close eye on this cyclone, until it no longer poses a threat.”
The current track map shows the system moving slowly south — taking it closer to Lord Howe Island in the South Pacific — until Saturday, before turning back in a northerly direction and remaining offshore, the bureau said. 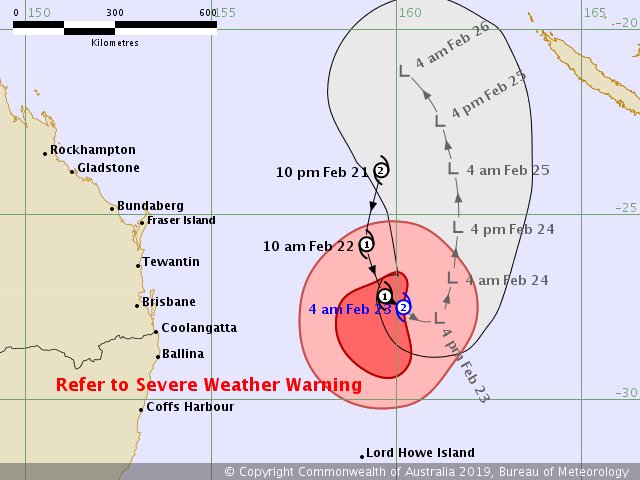 
The system is no longer expected to cross the coast, according to Mr Gunn. But it’s likely to continue to impact the southern Queensland coast and far northern NSW for several days with abnormally high tides, dangerous surf conditions and damaging winds.
“The main impacts are damaging winds along the coastal fringe and big seas, well into next week,” Mr Gunn said.
“We’re observing waves of three to four metres waves along the Sunshine, Gold and Tweed coasts with offshore waves in excess of 10 metres.
“These are expected to increase during the weekend.”
Nitro Circus, scheduled for Suncorp Stadium on Saturday night, brought its show forward to last night, based on the predictions, The Courier Mail reports.

Large waves at Mooloolaba as swell from Cyclone Oma impacts the Sunshine Coast. Photo Lachie MillardSource:News Corp Australia
A severe weather warning has been issued from Tweed Heads to Coffs Harbour while a hazardous surf warning is in place for the coastline between the Hunter and Tweed Heads over the weekend.
Beaches from Tweed Heads to Port Macquarie have been closed and are expected to remain closed until early next week.
“Surf and swell conditions will continue to be extremely hazardous for coastal activities such as rock fishing, boating, swimming and surfing,” Mr Gunn said.
Surf Life Saving NSW chief operating officer Phil Ayres urged beachgoers to remember if the flags are down, it’s not safe to swim.
Mr Ayres said the conditions are “extremely challenging” and urged surfers and swimmers to not to over-estimate their ability and underestimate the power of the ocean.
Rock fishers have also been urged to move to less exposed areas and to wear flotation devices.
Tropical Cyclone and Flood Watches have been cancelled.
Posted by seemorerocks at 16:28