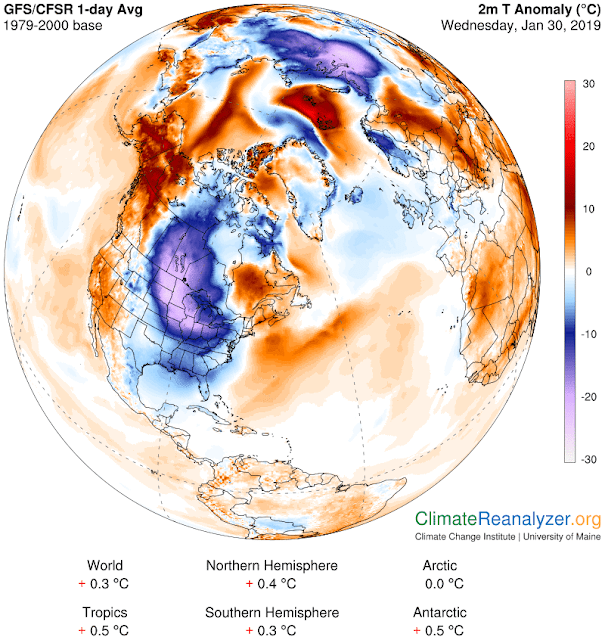 An extremely cold Arctic air mass continues to spill out of Canada and into the US today. This is the result of a very wavy jet stream, promoting a powerful surface high pressure system to plummet southward; and with it, the intense Arctic cold, typically normal to northern Canada. The worst impacts from this cold will be Wednesday and Thursday. Wednesday morning will feature wind chills as cold as 50-60 below, with potential for isolated values down to 70 below in northern Minnesota into the Dakotas.

For human health, it's the apparent temperature which is meaningful. And a significant sector of the country will see wind chill values near 0 F/-18 C overnight Tuesday/Wednesday. Wind chills capable of causing frostbite to exposed skin within 5 mins of exposure...generally -50 F/-46 C...will be possible across a wide swath of the northern Midwest and northern Plains.

Of course, while this disrupted polar vortex puts much of the eastern half of the US and Canada in the deep freeze, the Arctic Ocean Basin is undergoing warming. Abrupt climate change is accelerating the warming of the Arctic. This is allowing for major disruptions of the tropospheric polar vortex in the winter months, with the jet stream becoming extremely wavy with pronounced dips into the mid-latitudes. The result are intense, anomalous cold events in a couple of regions of the Northern Hemisphere, while most other places experience anomalous warmth; including the Arctic Basin, as intense upper-atmospheric high pressure systems and warm ocean storms move over the region.

Anomalously warm temperatures forecast over the next 7-days in the Arctic Ocean Basin. ~2.8 C average over the Basin relative to pre-industrial times. Also note the extreme cold anomaly over northern Siberia.

Air temperatures (above) and temperature anomalies (below) for 6 UTC Thursday (midnight CST Thursday). Cold anomalies of 20 degrees C below normal over parts of north-central Siberia with anomalies of 14-18 C above normal near the Kara and Laptev Seas! A cyclone is forecast to move over the Arctic Ocean, drawing in warm air from the Atlantic during this time.

So while these intense Arctic blasts may remind many of the typical cold winters of the past, the frequency of the blasts and the tendency in many places toward increasingly huge swings between very abnormal warmth and then cold and back again, means more chaotic seasonal conditions. This poses hazards for not only human health, but the health and biological patterns of other organisms as well as agriculture at the beginning and end of growing seasons.
---Meteorologist Nick Humphrey


Wisconsin Colder Than Antarctica, State Of Emergency Declared
A wave of extremely cold air has descended upon Wisconsin, and a State of Emergency has been declared for this week. 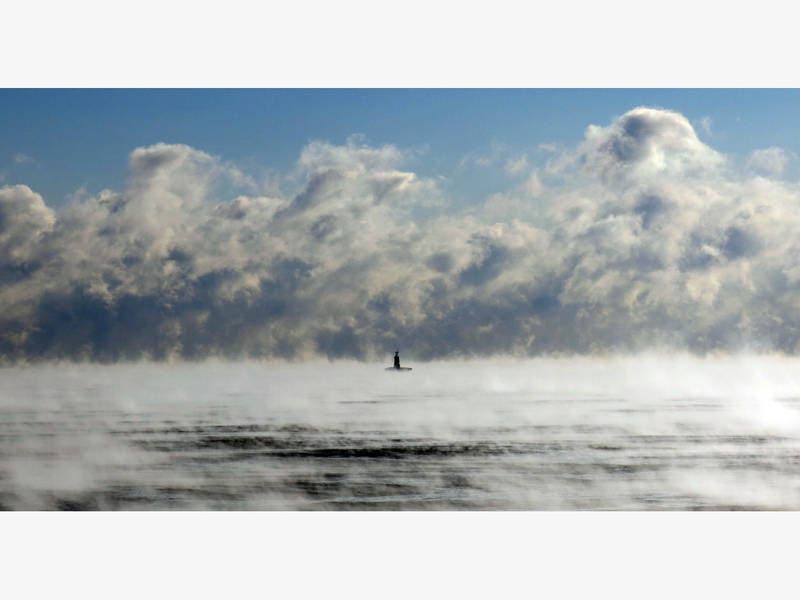 Wednesday morning is forecast to be our biggest chill. Morning lows will be from -20 to -30 degrees with afternoon highs from -10 to -17 degrees. The record low temperature in Milwaukee is -24 and was set 1951. According to historical data from the National Weather Service, the record minimum wind chill at Milwaukee is -56 was set on Jan. 10, 1982.
State of Emergency Declared
This week, Wisconsin Gov. Tony Evers declared a State of Emergency in Wisconsin for Jan. 27 through Feb. 1. In the emergency declaration, Evers cited extreme temperatures and dangerous travel conditions.
The State of Emergency gives state officials the option to deploy the Wisconsin National Guard to assist local authorities with emergency response and recovery needs throughout the state via the Wisconsin Emergency Management division.
Posted by seemorerocks at 19:31