Ukrainian Deputy Calls On Poroshenko To Declare War On Russia 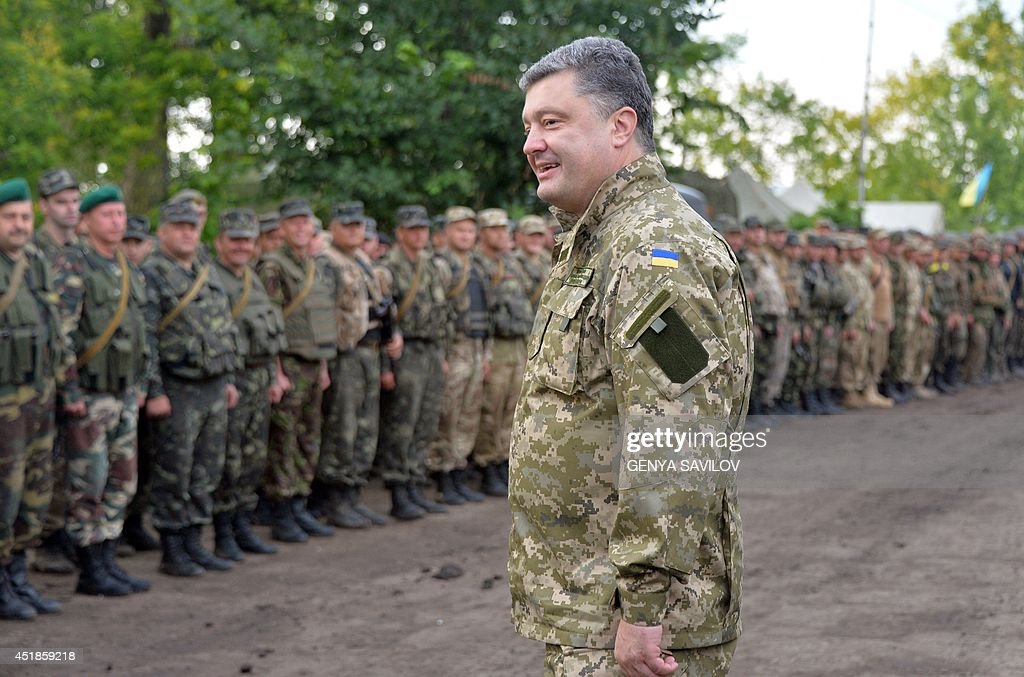 The proposal was made by Mr Vitaly Kupry. Information about the appeal was posted on the official website of the Ukrainian parliament.

The document was presented under the title “Draft decree on the appeal of the Supreme Rada of Ukraine to the Ukrainian president regarding the declaration of war, rupture of diplomatic relations and suppression of communications by means of transport with the Russian Federation.”

Last week, the Ukrainian leader signed a law ending the Treaty of Friendship, Cooperation and Partnership between Ukraine and the Russian Federation. The new law provides that the agreement will cease to apply from April 2019. Moscow described the decision of Kiev as a destructive step and lamented the break.

The Treaty of Friendship, Cooperation and Partnership between Russia and Ukraine was signed in Kiev on 31 May 1997. The document, valid for 10 years, entered into force on 1 April 1999 with automatic extension for a further 10 years if there are no objections.

The document is essential for bilateral relations between the two countries and provides for a strategic partnership.

Meanwhile, Kiev is moving parachute units to the sea coast of Azov and Black Sea, stated Poroshenko during his visit to the part of the Donetsk region controlled by Ukrainian authorities.

According to the Ukrainian president, among others will be displaced, by air, detachments of the 95th brigade, which will also strengthen the defense of the coast, a Ukrainian TV channel said.

Poroshenko added that after the imposition of martial law, the short-term training of the brigades that defended the most dangerous flank was carried out.

Russian Deputy Aleksandr Sherin believes that Poroshenko’s statement is one more way of raising his popularity and a pretext for prolonging martial law. According to him, the decision is not appropriate from the military point of view, nor from the point of view of military tactical or strategic actions.


"Declaration of War on Russia" Bill Introduced in Ukraine Parliament

A Member of the Ukraine Rada (Parliament) has introduced the paperwork for a Declaration of War on Russia, the cessation of Diplomatic Relations,  and the severing of Transport ties.

The Member of Parliament (MP) Vitaliy Nikolayevich Kuptiy introduced the Resolution today, December 21, as shown below: 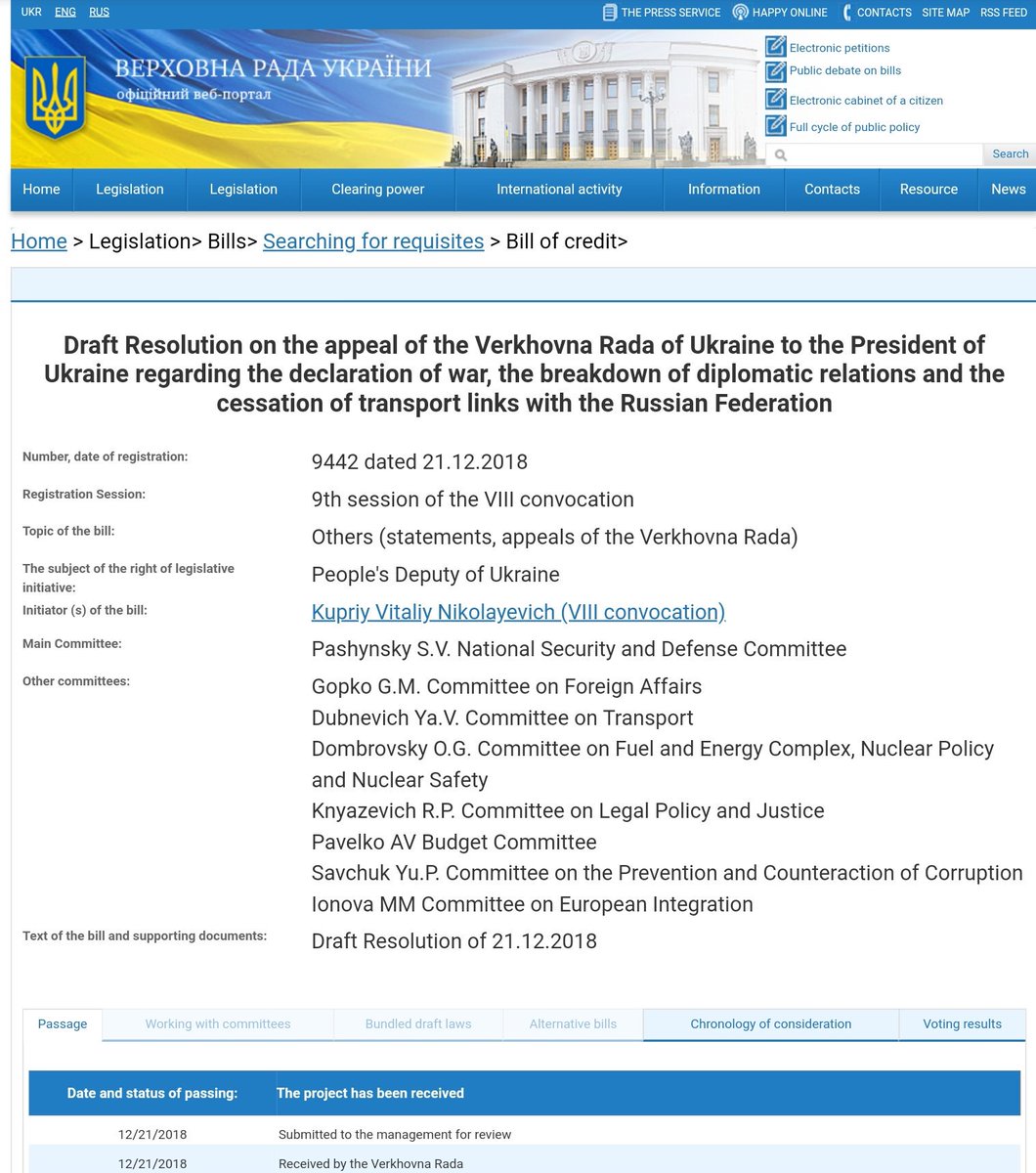 I don't know what type of suicidal maniac one must be in order to introduce something like this into the Ukraine legislature, but clearly, someone over there is out of his mind.

It seems to me that no one would even THINK of doing such a thing unless they were being given assurances that NATO and the USA "have Ukraine's back."

Whoever in NATO and the USA gave such assurances should be stopped.   This is utter madness.

In response to this action, More than a dozen SU-27 and SU-30 fighter jets which Russia is deploying to boost its air force, amid heightened tensions with Ukraine, arrived in Crimea today.

I earnestly hope all of you have "preps" of emergency food, water, medicines, fuel for generators and heat.  Because if what you see above is actually enacted by the Ukraine legislature, World War 3 is upon us all.

More and more signs that Ukraine President Poroshenko will launch an offensive against Donbass in order to cancel elections and remain in power: 100s of tanks and armored vehicles amassed near the frontline.

Russia has previously made it explicitly clear that if Ukraine launches a military offensive against the Russian-speaking populations of Donetsk and Luhansk, the two break-away provinces in eastern Ukraine, Russia would be compelled to intervene militarily.  Those two provinces broke away from Kiev (Capital of Ukraine) after the US and NATO fomented the violent overthrow of democratically-elected President Victor Yanukovich, and installed a puppet regime favorable to Europe and the US.

Since that time, the Ukraine has been using military to try to regain control over the two Provinces, but the people there are fighting them using militia-style tactics.  The Ukraine government has not been able to forcibly overcome those militias.  So apparently now, Ukraine intends to launch a full-out military offensive; exactly what Russia warned would result in a Russian military response.

For geographic reference purposes, you need to know that the Mediterranean Sea joins the Black Sea via the Strait of Bosporus.   The Black Sea then joins the Sea of Azov via the Kerch Strait.  Here's a map of the region: (Click Map to enlarge)

The Montreaux convention would allow US Destroyers and guided missile cruisers entry.  Vessels of that size have already entered the Black Sea for years.  But if war comes, every single man on any of those ships -- and the ships themselves -- would be utterly wiped out.

The Sea of Azov and the Black Sea are, in military terms, “Russian lakes.” That means that Russia has the means to destroy any and all ships (or aircraft) over these two seas: on the Black Sea the life expectancy of any intruder would be measured in minutes, on the Sea of Azov,  in seconds.

Any and all ships deployed in the Black Sea and the Sea of Azov are detected and tracked by Russia and they can all easily be destroyed. The Russians know that, the Ukrainians know that and, of course, NATO knows that. Again, keep that in mind when trying to make sense of what is happening.


Whether the waters in which the Kerch Strait incident happened (Where Ukraine sent ships without advance notice which were fired upon and impounded weeks ago) belong to Russia or not is entirely irrelevant. Everybody knows that Russia considers these waters are belonging to her and those disagreeing with this have plenty of options to express their disagreement and challenge the legality of the Russian position.

Trying to break through waters Russia considers her own with several armed military vessels is simply irresponsible and, frankly, plain stupid considering Russia's military dominance and superiority in that region. This is simply not how civilized nations behave (and there are plenty of contested waters on our planet).

If Ukraine moves ahead with its Declaration of war upon Russia, all military assistance from NATO would have to come via land in Europe.  No vessel trying to transit the Black Sea or the Sea of Azov would have any hope of arriving in Ukraine.

If Europe begins supplying Ukraine in a war with Russia, then Europe itself becomes a target of Russia.

It is estimated in both military and Intelligence circles that the Russian Army could be in Vienna, Austria within about eight HOURS, and conquer Paris France within about a week.

THAT is what the powers-that-be are getting us into as they pursue this suicidal endeavor with Ukraine.

According to former colleagues of mine with whom I worked during my years with the FBI Joint Terrorism Task Force (JTTF) as a National Security Intelligence Asset, Russia has been building up military forces along the Ukraine/Russia mutual border.

Apparently, Poroshenko does not seem to equate what HIS OWN COUNTRY is doing and saying, is what has caused this military build-up.  He seems oblivious to the fact that, for weeks, his country has been openly talking about "going to war against Russia."

Russian APC's on the move in Crimea:

Russia continues to position military assets in Crimea to defend against a planned attack by Ukraine in an effort to negate the VOTE undertaken by citizens in Crimea to join Russia.

Almost 90% of the adult voters in Crimea voted to join Russia after the US and NATO fomented the overthrow of the former Ukraine President, Victor Yanukovich.  The Crimeans VOTED to join Russia.

Russia pointed out that those missiles  have interchangeable warheads and, what LOOKS like a missile interceptor, can quickly be re-fitted with a nuclear warhead for first-strike purposes.

Russia also pointed out that these missiles in Poland and Romania are of a type that can travel so fast, and so far, that it would be nearly impossible for Russia to defend against such missiles.  Given that such missiles can be fitted with nuclear warheads, and given the fact those missiles CAN REACH RUSSIA'S NUCLEAR DETERRENT FORCES, those missiles put Russia in the position of losing it's nuclear deterrent and succumbing to a NATO/US nuclear first strike.

Finally, Russia points out that the reasons the US and NATO would undertake such a first strike is to steal Russia's vast natural resources: oil, gas, gold and such.  They point to the fact that after Europe/NATO/US fomented the forcible overthrow of Ukrainian President Yanukovich, one of the FIRST things done was to put an AMERICAN as President and CEO of Ukraine's national oil and gas company.  Who is that American?  Former Vice President Joe Biden's SON.

What is taking place right now is about conquest of Russia to grab it's natural resources, and remove all obstacle to absolute world domination by Europe/ the US and NATO.   Russia simply will not allow these things to happen.

Thus, the stage is now set and the pieces are moving into final position for an all-out battle.  Because people outside Russia want to get their filthy, thieving hands on Russian natural resources, and remove all obstacle to them doing whatever they want, worldwide.  In simple terms: Money and power.

The fact that World War 3 would have to take place to achieve that seems not to matter to the people seeking this.  The deaths of tens of millions seem to also not matter.

Apparently, you, I -- and our families and our countries --  are viewed as canon fodder . . . . expendable . . .  in the machinations of these psychopathic, rich, power-hungry, madmen; folks who simply cannot stop themselves from lying, cheating, stealing and killing to get . . .  more.

From COVERT INTELLIGENCE Sources with whom I worked in my years with the FBI:

"On the territory of the Stavropol and Kuban regions, over 3,000 servicemen took part in drills on conducting radiation, chemical and bacteriological reconnaisance; as well as on deactivating contamination from nuclear weapons from terrain, weapons, and military equipment.
It should be apparent to even the most mentally dense persons, that Russia would not undertake this activity unless it thought a nuclear exchange was coming.
ASSESSMENT: If there is a nuclear exchange between Russia/Ukraine, it could be IMMEDIATELY shared with both Europe and the Continental United States -- at least on a small, but survivable scale, just to share the horror.
Things are spinning rapidly out of control and danger for all of us is mounting at this hour.  If you have any last-minute preps you need, food, water, fuel for electric generators or wood/kerosene for emergency heating, NOW is the time to get it.
All cars/trucks should be fueled-up full and ready to go.
Go-bags for bugging-out should be packed and accessible.