The attack against ISIS close to Golan Heights 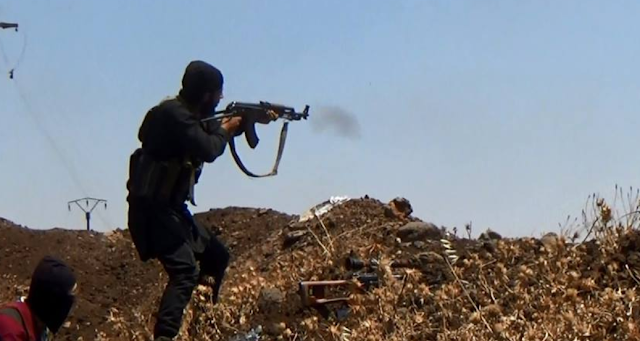 MOSCOW – Russia’s Defense Ministry said the Syrian attack on ISIS held Syrian territory very close to the Syrian territory occupied by Israel, on Wednesday was made against ISIS positions. Israel has been funneling weapons, supplies, ammunition, and medical provisions to ISIS since the onset of the conflict.

In what will surely go down as one of the more memorable Zionist blunders in this conflict, the Israeli attack in response meant to hit Syrian positions instead hit missile launchers used by ISIS.
This comes only days after FRN and other trusted news and information sites such as AMNrevealed that Israel evac’d White Helmets.
The Russian Defense Ministry also reported that it expressed what FRN can only infer, in its experience deciphering Russian messaging, as sarcasm or public dog-whistling, a degree of ‘gratitude’ to the Israeli Defense Forces for destroying ISIS terrorists in an attack on jihadist positions in Quneitra. In fact it was an ‘own goal’.
“The command of the Russian Armed Forces in Syria used the existing channels of communication to thank the IDF leadership for killing terrorists and stopping a major provocation,” the ministry said in a statement.

The Russian military said ISIS attempted on Wednesday to call in an Israeli attack on the positions of the Syrian army, launching missiles at Israel. There any number of ways that this operation could have been carried out. Hezbollah as a strong track record of hacking into IDF communication lines in the field, and, for example, would have been in the best position to ‘false flag’ an operation against ISIS by identifying ISIS targets as Syrian. However, at the time of publication, FRN has no concrete information on Hezbollah’s role in this operation.
“A precision strike by jets and IDF artillery has operationally destroyed ISIS terrorists and their missile launchers,” the Russian ministry said.
This is an interesting move considering it comes just days after the Israeli military downs a Syrian jet that was attacking ISIS positions in the very same region, killing one pilot and the fate of the other still unknown. This occurred in the very same region the Israeli attack against ISIS occurred.
This is also the very first time ISIS has been attacked by Israel despite it being apparently an operation meant to attack Syrian positions – the IDF was deceived. The IDF has known of ISIS existing on the border of the Israeli-occupied Golan Heights for years, because this is their rendezvous point for numerous joint operations.
Rather, Israel has prioritized attacking Iranian, Hezbollah and Syrian Army positions, even when they were fighting against ISIS. With the Syrian Army continuing a powerful advancement against ISIS in the aforementioned region, it is only a matter of weeks before the terrorist group will be completely defeated in this part of Syria.
Therefore, Israel will ultimately be able to spin this blunder into a face saving operation to portray that it does fight against terrorist groups in Syria. More importantly, it helps inoculate ISIS/Al Qaeda/White Helmets members from the reality that they are work towards the aims of Greater Israel. Damascus has made no comments on the Russian thank you to Israel.