A weather forecast for Europe 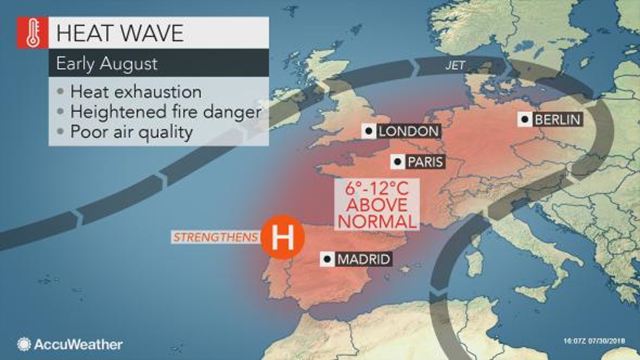 (AccuWeather) – Dangerous heat is expected to expand across and have a firm grip on western Europe for the first several days of August.

While the core of the heat will be focused on the area around Germany on Tuesday, temperatures will be on the rise elsewhere across western Europe Wednesday into Friday.

Temperatures will continue to soar 6-12 degrees Celsius (10-24 degrees Fahrenheit) above normal in most of these cities through at least the weekend.

"It is not out of the question for temperatures to reach 49 C (120 F) in southwestern Spain and parts of southern Portugal Friday into Sunday," AccuWeather Meteorologist Tyler Roys said.

"In southwestern France, temperatures can climb to 43 C (110 F) in a few communities this weekend," according to Roys. [more] 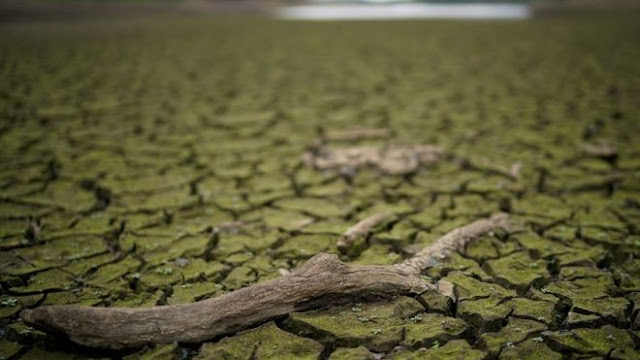 After an unprecedented two month drought with the hottest temperatures on record, parts of the UK has now witnessed it's wettest day ever and today is set to be even worse as the Met Office has warned that this will only get worse today, with gale-force winds and heavy rain.

Parts of the UK experienced their "wettest ever day," with Aldergrove in Northern Ireland hit by 98.8mm - which is more than a month's worth of rainfall.

The UK is braced for more than 36 hours of torrential downpour, according to the Met Office which has issued several weather warnings over rainfall and gale-force winds.

Intense flooding and gale-force winds are expected in places causing travel chaos around the country.

According to The Daily Express, Saturday marked the first day since 23 June that nowhere in the UK had temperatures above 25C.

Yesterday's highest temperature, 24C, was found in Cavendish in Suffolk and Weybourne in Norfolk.

This points to a dramatic 10-degree drop from Thursday, the hottest day of the year so far.

However, the Met Office is warning the heatwave will be back by midweek.

Europe and inside the Arctic

circle during the weekend


Temperatures again soared above 30 °C across parts of north Europe this weekend. Foehn winds warmed the fjords of western Norway up to 33 °C and up to 30 °C far north at 70°N, within the Arctic circle. 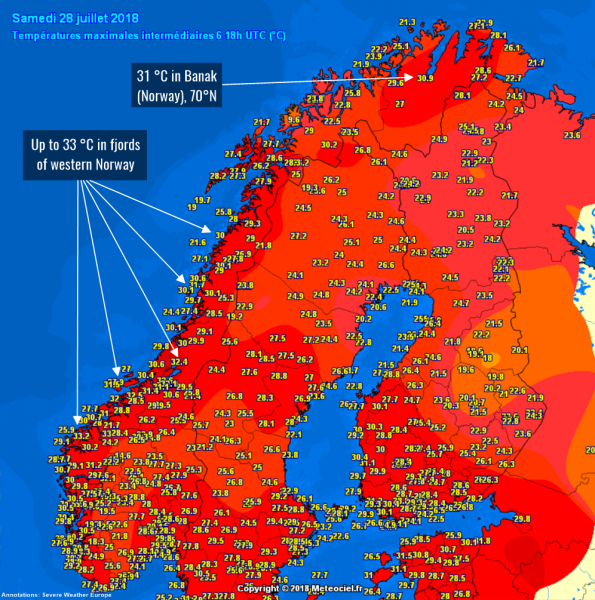 
On Saturday the coast of western Norway hit up to 33 °C as Foehn winds warmed the fjords. Banak, Norway at 70 °N pushed to 31 °C.

Temperatures again pushed to 30 °N as far north as Banak, Norway on Sunday. Daytime highs in the upper 20s and even above 30 °C were recorded across much of north Europe. Maximum temperatures across north Europe on Sunday, July 29, 2018. Map: meteociel.fr
Another sign of very warm days across the north are the lowest night time temperatures. Some very high values were recorded. In some stations, so-called “tropical nights” were observed – the lowest temperature did not drop below the 20 °C threshold. Here are this morning’s lows across Norway: Tromso, Norway hit a night time minimum of 20.8 °C, the highest since the beginning of measurements in 1920.
No respite for the region, as 5-day GFS model guidance indicates temperatures in the upper 20s and lower 30s, with temperature anomaly up to 10 °C above average.