There is no doubt that Donald Trump sets news records for insensitivity and cruelty. But then each US president is worse than the one before.


Liberals like to put all the blame on the Dotard in the White House but is he just a reflection of the direction the Empire is taking.

It’s not as if all this started at the beginning of 2017!

This is the latest issue to obsess the mainstream media. Meanwhile the US continues to bomb civilians across the globe and the liberals, so hypocritically obsessed with human rights wants Trump to be even more of a hawk when it comes to wars overseas.


'Put in cages' or 'taken care of': How separated immigrant children are housed in detention

Sen. Jeff Merkley, a critic of President Trump’s immigration agenda, went down to the border to see firsthand how immigrant families were being treated by federal agencies.

The verdict? Not good. On CNN the next morning, Merkley described a facility in McAllen, Tex., where “hundreds of children” were locked up in cages. His comments reminded us of some photos that recently went viral, showing children in chain-link fence enclosures at an immigration processing center in Nogales, Ariz.

In the days before Merkley’s trip, some Democrats — including former Los Angeles mayor Antonio Villaraigosa and Jon Favreau, a former speechwriter for President Barack Obama — tweeted pictures of the Nogales facility and criticized the Trump administration for holding immigrant kids in draconian settings.

It turned out the Nogales photos were taken during the Obama administration, in 2014, as several fact-checkers were quick to note. Favreau and Villaraigosa deleted their tweets. But then Merkley said he saw these cages with his own two eyes in McAllen

This is what our in-house liberal, Robertscribbler has to say

When Fear of Migrants Translates to Putting Children in Cages

It turns out that photos of children in cages date from the Obama era! 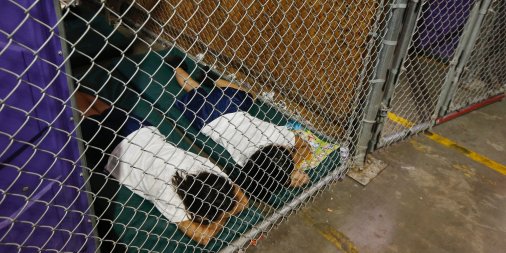 This item is from 2015
Mass Graves of Immigrants Found in Texas, But State Says No Laws Were Broken

Texas says there is “no evidence” of wrongdoing after mass graves filled with bodies of immigrants were found miles inland from the U.S.-Mexico border. The bodies were gathered from the desert surrounding a checkpoint in Falfurrias, Texas, in Brooks County. An investigation was launched after the mass graves were exposed last November in a documentary by The Weather Channel in partnership with Telemundo and The Investigative Fund. The report also found many of the migrants died after crossing into the United States and waiting hours for Border Patrol to respond to their 911 calls. We speak with reporter John Carlos Frey, who found rampant violations of the law.

This is how the most rabid pro-Trump outlet puts it.

During a press conference Monday, Donald Trump announced that, as he hinted previously, he's ordering the Pentagon to "immediately" establish a "space force" as an independent service branch. That's right: Today might be the day that future generations look back on as the anniversary of the creation of the legendary US Space Force, guardians of intergalactic order.

India is moving forward with plans to hit back at the United States over trade.

The country has proposed hiking tariffs on 30 US products in order to recoup trade penalties worth $241 million, according to a revised World Trade Organization filing.

India said the retaliatory barriers are equal in value to US tariffs on steel and aluminum from India that were imposed by the Trump administration in March.

The new tariffs target products including American almonds, walnuts and apples, as well as some chemical and metal products.

Analysts said investors were still jittery following Friday's tit-for-tat tariff announcements by the US and China. Markets fear a further escalation could derail the global economy.

The US government released some memorable images on Thursday, revealing the inside of a mysterious new U.S. Department of Health and Human Services (HHS) immigration detention center for children who crossed illegally into the United States

From last year but emblematic 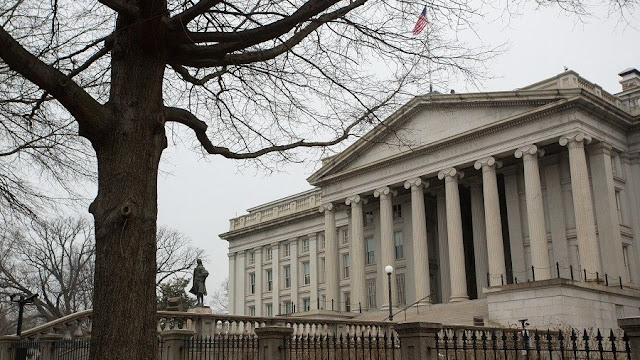 Russia dumps half of its US Treasury bonds

Russia has held a major selloff of US Treasury bonds, dumping some $47bn-worth of papers and momentarily dropping six places on a list of major foreign holders of US securities, recently released statistics for April have shown.

In just one month, Russia proceeded to sell $47.4 billion out of the $96.1 billion the country had in US treasury bonds in March. The latest statistics released by the US Treasury Department on Friday showed that, in April, Russia had only $48.7bn in American assets, occupying 22nd place on the list of “major foreign holders of Treasury securities.”

This, of course is down to collapse, not to the Democrats.
"Terrified" San Francisco Tourists Shocked By Aggressive Vagrants, Discarded Needles, Dead Bodies

Syringes were visible, people were staggering, others had wide aggressive eyes.

San Francisco - a Democratic stronghold known for cable cars, quaint architecture and its diverse culture, has become a bastion of squalor and crime as city dwellers and visitors alike dodge aggressive, drug-addled vagrants. And it's beginning to scare the tourists... 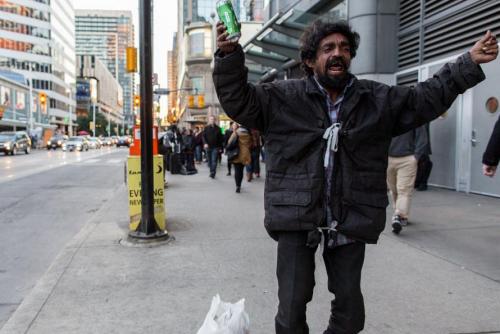 An Australian couple visiting the city were shocked by what they saw after deciding to walk back to their hotel:

"Is this normal or am I in a 'bad part of town?' Just walked past numerous homeless off their faces, screaming and running all over the sidewalk near Twitter HQ and then a murder scene. Wife is scared to leave hotel now," reads a Wednesday posting by Reddit user /u/nashtendo. 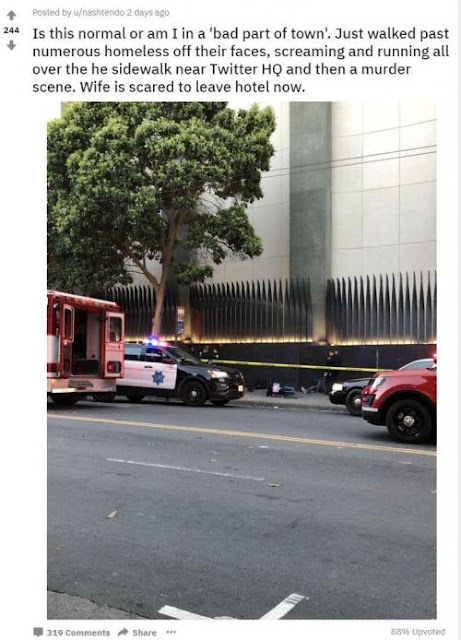 When another Redditor said "put on your big boy pants... scared to leave the hotel?"...

It was my wife that was scared and it was partly the mass of concentrated, drug affected homeless mixed with a guy being rolled into an ambulance dead. -/u/nashtendo

"We did La and Nyc on this trip too. Both felt safer," he said later in the thread, adding "Syringes were visible, people were staggering, others had wide aggressive eyes. 'Off their faces' might be an Australian thing (sorry) but I meant just visibly drug affected." 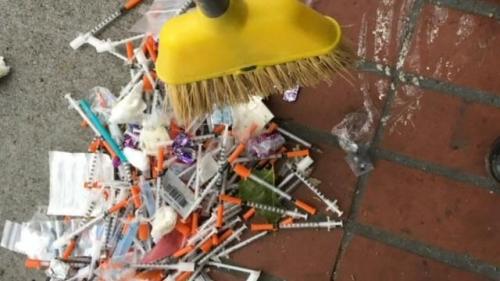 It's pretty normal. I'm honestly hoping tourists will realize how shitty this city has become and stop coming. Maybe the loss of income will finally push the city to stop allowing the rampant drug dealing and homeless people treating the entire city like their toilet. You would think a city that deoends so heavily on tourism and conventions for the bulk of their income would put more effort into maintaining a certain standard, but there is rampant drug dealing out in the open in some of the most heavily tourist areas. The city know about it, they just don't care. -/u/SgtPeanutbutter

"You see things on the streets that are just not humane," Kevin Carroll, executive director of the Hotel Council of San Francisco told The Chronicle's Heather Knight in April. "People come into hotels saying, 'What is going on out there?' They're just shocked. ... People say, 'I love your city, I love your restaurants, but I'll never come back.'"

In a completely seperate thread, another Reddit user posted in the San Francisco subreddit "Why is this city so terrifying?"

I’ve wanted to visit SF my entire life and I finally make it here and my goddddd it’s terrifying. Anyone have any advice for a tourist aside from “don’t be such a pussy.” -u/xnmb1

"The streets are filthy. There's trash everywhere. It's disgusting," Joe D'Alessandro, president of S.F. Travel told the Chronicle's Heather Knight in April. "I've never seen any other city like this — the homelessness, dirty streets, drug use on the streets, smash-and-grabs."

The city, which hands out up to 4.8 million syringes each year, has struggled to figure out how to keep streets clean and safe for residents, while accommodating a growing homeless population and longstanding HIV and Hepatitis C epidemics. There are roughly 16,000 residents in San Francisco with HIV, and 13,000 with Hep C. 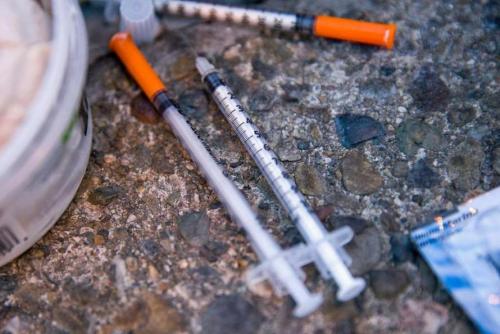 City Health Director Barbara Garcia estimated in 2016 that there were 22,000 intravenous drug users in San Francisco - around one for every 38.9 residents, while the city hands out roughly 400,000 needles per month.

Of the 400,000 needles distributed monthly, San Francisco receives around 246,000 back - meaning that there are roughly 150,000 discarded needles floating around each month - or nearly 2 million per year, according to Curbed.

Mayor Mark Farrell has said, repeatedly, in recent weeks that the problem of discarded syringes on city streets has become a sticking point for him, and the city promised millions of dollars to curb the problem of hazardous waste on sidewalks and streets.

Meanwhile, San Francisco Chronicle’s Matier and Ross chimed in Wednesday with an uncomfortable observation: Most of the needles littering streets in downtown neighborhoods came by way of the city itself, as part of the Department of Public Health’s 25-year-old needle exchange program. -Curbed

While certainly nowhere near the top of the list, crime is also a problem in San Francisco - which is higher than 92.7% of the United States according to city-data.com. 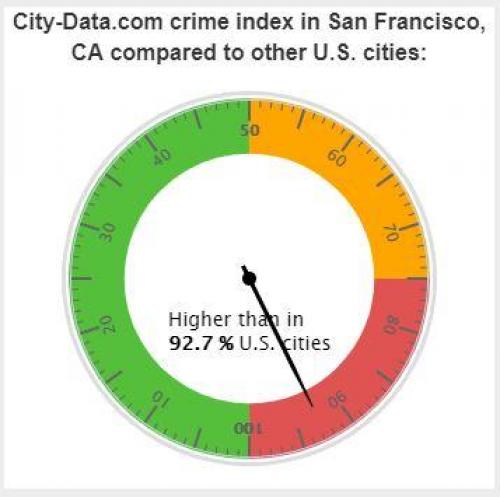 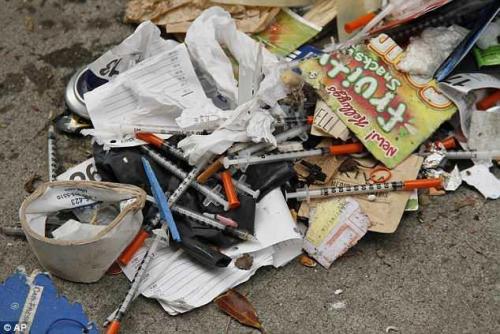 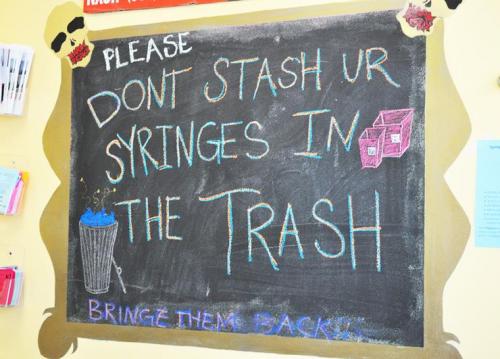