How the US Is Destroying Europe

How the US, Under Obama, Created Europe’s Refugee Crisis
Eric Zuesse 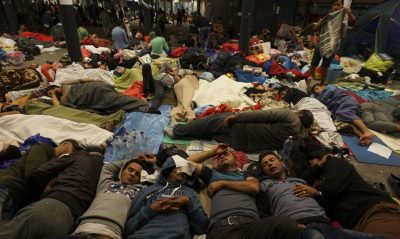 The current US President, Donald Trump, claimed on June 18th, that Germany’s leadership, and the leadership in other EU nations, caused the refugee-crisis that Europe is facing:

“The people of Germany are turning against their leadership as migration is rocking the already tenuous Berlin coalition. Crime in Germany is way up. Big mistake made all over Europe in allowing millions of people in who have so strongly and violently changed their culture!”

Trump blames Angela Merkel for — in essence — having been an ally of the US regime, a regime of aggression which goes back decades, and which Trump himself now is leading, instead of his ending, and of his restoring democracy to the United States, and, finally, thus, his restoring freedom (from America), and peace, to other nations, in Europe, and elsewhere (such as in Syria, Yemen, etc.). He blames Merkel, not himself and his predecessor — not the people who actually caused these refugees.

Hypocrisy purer than that which Trump there expressed, cannot be imagined, and this hypocrisy comes from Trump now, no longer from Obama, who, in fact, caused the problem.

As the 2016 study, “An Overview of the Middle East Immigrants in the EU: Origin, Status Quo and Challenges” states in its Abstract:

“EU has the most inhabited immigrant population; it has up to a population of 56 million foreign-born people. And due to the perennial war and chaos in the Middle East, the amount of relocated population in the region, especially the number of refugees, ranks the No.1 all over the world. … There are a large number of refugees and asylum seekers heading to EU countries; it can be divided into four stages. Since the Arab Spring, especially after the outbreak of the civil war in Syria in 2011, and the rise of the “Islamic State” in 2013, the whole EU area have experienced the biggest wave of refugees since World War II.”

All of these invasions have been, and are, invasions of countries where the US regime demands regime-change.

In order to understand the deeper source of this problem, one must understand, first, the US regime’s continuing obsession to conquer Russia after its communism and Warsaw Pact military alliance, had ended (click onto that link to see the documentation); and, second, one needs to understand the US regime’s consequent and consistent aim after the supposed end of the Cold War, to take over control of Russia’s allied countries, including not only those within the Soviet Union and its military Warsaw Pact, but also within the Middle East, especially Syria and Iran, and even countries such as Libya, where the leader was nominally Sunni but nonetheless friendly toward Russia
.
(The link there provides documentation not only of what’s said here, but it also documents that the alliance between the two aristocracies, of the US and of Saudi Arabia, is essential to the US aristocracy’s Middle-Eastern objective; and Israel’s aristocracy serves as an essential agent of the Sauds in this crucial regard, because the Sauds rely heavily upon the Israeli regime to do its lobbying in Washington.

In other words: America’s consistent objective is to isolate Russia so as for the US regime to emerge ultimately in a position to take over Russia itself. That’s the deeper source of Europe’s refugee-crisis.)

Back at the start of the promised post-Cold-War period, in 1990, the US regime, under its then-President, George Herbert Walker Bush, privately and repeatedly agreed with the USSR regime, under its then-President Mikhail Gorbachev, to end the Cold War — agreed that NATO would not expand “one inch to the east” — that there would be no expansion of the US military alliance against the USSR (soon to become against Russia alone).

The US regime’s promise was that NATO would not take in and add to NATO’s membership, any of the countries that then were either in the USSR’s military alliance the Warsaw Pact (Albania, Bulgaria, Czechoslovakia, Hungary, Poland, and Romania) or in USSR itself other than Russia (Armenia, Azerbaijan, Byelorussia, Estonia, Georgia, Kazakhstan, Kirghizia, Latvia, Lithuania, Moldavia, Tajikistan, Turkmenistan, Ukraine, and Uzbekistan), except for the eastern part of Germany. The US regime simply lied. But the Russian Government followed through on all of its commitments. Russia was now trapped, by Gorbachev’s having trusted liars, whose actual goal turned out to be world-conquest — not peace.


Currently, the membership of NATO includes all of the former Warsaw Pact nations, and now the US regime aims to bring in also to “NATO membership: Bosnia and Herzegovina, Georgia, the former Yugoslav Republic of Macedonia¹ and Ukraine.” Georgia and Ukraine are the first parts of the former USSR republics — not merely parts of the Warsaw Pact but parts now of the USSR itself — to join the anti-Russian military alliance, if either of them gets allowed in. The very possibility of this happening, goes beyond anything that the naive, trusting, Mikhail Gorbachev, would ever have imagined. He hadn’t the slightest idea of how evil was (and still is) America’s Deep State (that which controls America). But now we all know. History is clear and unambiguous on the matter.

The NATO mouthpiece, Brookings Institution, headlined on 15 November 2001, “NATO Enlargement: Moving Forward; Expanding the Alliance and Completing Europe’s Integration” and pretended that this expansion is being done in order to help Europeans, instead of to conquer Russia.

Ukraine has the longest of all European borders with Russia and so has been America’s top target to seize. But before seizing it, the US had tried in 2008 to turn Georgia against Russia, and the Georgian Mikheil Saakashvili was a key US agent in that effort. Saakashvili subsequently became involved in the violent coup that overthrew Ukraine’s Government in February 2014.
Saakashvili organized the Georgian contingent of the snipers that were sent to Ukraine to shoot into the crowds on the Maidan Square and kill both police and demonstrators there, in such a way so that the bullets would seem to have come from the police (Berkut) and/or other forces of Ukraine’s democratically elected Government. (Click on this link to see two of the Georgian snipers casually describing their participation in the coup, and referring tangentially to former Georgian President Saakashvili’s role in it. Here is a more comprehensive video compilation describing and showing the coup itself. As I have pointed out, the testimony of these two Georgian snipers is entirely consistent with what the investigation by the EU’s Foreign Ministry had found out on 26 February 2014 about the snipers, that “they were the same snipers, killing people from both sides” and that these snipers were “from the new coalition government” instead of from the government that was being overthrown — that it was a coup, no ‘revolution’ such as Obama’s people claimed, and Trump’s people now assert.) The US regime has agents in all regions of the former Russia-affiliated bloc — not only in Western Europe.

Europe has refugees from the Ukrainian operation too, not only (though mainly) from the Middle Eastern ones.

Europe’s enemy isn’t Russia’s aristocracy, but America’s aristocracy. It’s the billionaires who control America’s international corporations — not the billionaires who control Russia’s international corporations — it is specifically America’s billionaires; it is the people who control the US Government; these, and no Russians at all, are the actual decision-makers, who are behind bringing down Europe. In order for Europe to win, Europeans must know whom their real enemies are. The root of the problem is in the US, Europe’s now fake ‘ally’. Today’s America isn’t the America of the Marshall Plan. The US Government has since been taken over by gangsters. And they want to take over the world. Europe’s refugee-crisis is simply one of the consequences.

In fact, Obama had started, by no later than 2011, to plan these regime-change operations, in Libya, Syria, and Ukraine. But, in any case, none of the regime-change operations that caused the current unprecedented flood of refugees into Europe started because of what Europe’s leaders did (other than their cooperating with the US regime). Today’s American Government is Europe’s enemy, no friend at all, to the peoples of Europe. Trump’s blaming this crisis on Europe’s leaders isn’t just a lie; it is a slanderous one.

And this fact is separate from Trump’s similar slanderous lie against the refugees themselves. On May 8th, Germany’s Die Welt newspaper had headlined “Number of crimes falls to lowest level since 1992” and reported that Germany’s Interior Minister, Horst Seehofer, announced the 2017 national crime statistics, and he said, “Germany has become safer,” the safest in the last 30 years. Seehofer happens to be a member of Chancellor Merkel’s Administration who is angling to replace her as Chancellor by appealing to the strong anti-immigrant portion of their own conservative party, but even he had to admit, essentially, that the anti-immigrant slur that Trump subsequently made on June 18th is a bald lie; it’s even the exact opposite of the truth. Trump’s tweeted comment then was a lying slander not only against Merkel and other European leaders, but also against the refugees that the US regime itself had produced. How depraved is that? How depraved is Trump?

The refugee crisis isn’t due to the refugees themselves; and it’s not due to Europe’s leaders; it is due to the almost constantly lying US regime — the people who actually control America’s Government and America’s international corporations.
On June 21st, Manlio Dinucci at Global Research headlined “The Circuit of Death in the ‘Enlarged Mediterranean’” and he opened by saying,

“The politico-media projectors, focussed as they are on the migratory flow from South to North across the Mediterranean, are leaving other Mediterranean flows in the dark – those moving from North to South, comprised of military forces and weapons.”

But the world’s biggest international seller of weapons is the US, not the EU; so, his placing the main focus on European billionaires was wrong. The main culprits are on Trump’s own side of the Atlantic, and this is what is being ignored, on both sides of the Atlantic. The real problem isn’t across the Mediterranean; it is across the Atlantic. That’s where Europe’s enemy is.

On 7 August 2015, I headlined “The US Is Destroying Europe” and reported that:

“In Libya, Syria, Ukraine, and other countries at the periphery or edges of Europe, US President Barack Obama has been pursuing a policy of destabilization, and even of bombings and other military assistance, that drives millions of refugees out of those peripheral areas and into Europe, thereby adding fuel to the far-rightwing fires of anti-immigrant rejectionism, and of resultant political destabilization, throughout Europe, not only on its peripheries, but even as far away as in northern Europe.

It’s continuing under Trump.
Investigative historian Eric Zuesse is the author, most recently, of  They’re Not Even Close: The Democratic vs. Republican Economic Records, 1910-2010, and of  CHRIST’S VENTRILOQUISTS: The Event that Created Christianity. He is a frequent contributor to Global Research.

Posted by seemorerocks at 19:25