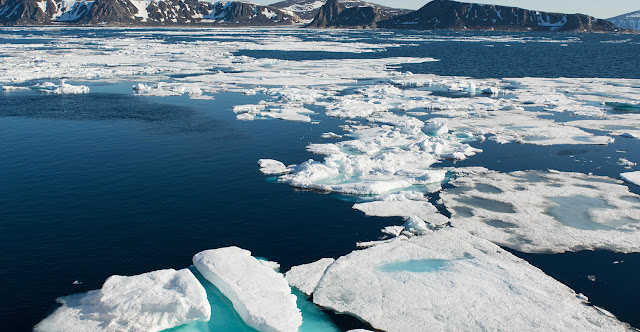 If current trends continue, the transition could occur “around 2040”, the lead author tells Carbon Brief. This would have “unknown consequences” for the wider ecosystem and commercial fishing, the study warns.

The Barents Sea is “at the doorstep to the Arctic Ocean”, the new paper says, roughly hemmed in by Russia and Scandinavia to the south, the island of Svalbard to the northwest and Russia’s Novaya Zemlya archipelago to the east.

It is broadly divided into two regions. The waters of the northern Barents are cold, fresh and often covered in sea ice, while the south is supplied with warm and salty water from the Atlantic Ocean, which prevents ice from forming on the surface.

The graphic below illustrates this in more detail. On the left-hand side, the Atlantic domain – the southern Barents Sea and beyond – is relatively warm and well-mixed. On the right-hand side is the interior Arctic, where a large body of cold, ice-covered Arctic water sits on a deeper Atlantic layer. The Arctic domain is highly “stratified”, which means the different layers of water stay largely separate.

The central section shows the “frontier” region of the northern Barents Sea. This has a shallower Arctic water layer that is usually only covered in sea ice through the winter.

Illustration of the frontier region between Atlantic (left) and Arctic (right) ocean climate domains. The Atlantic domain has warm and saline Atlantic Water (red) occupying the entire water column, and has large heat losses to the atmosphere (in winter). The Arctic domain is cold, stratified and sea-ice covered, having an intermediate Arctic layer of cold and fresh Arctic Water (blue) over a deep Atlantic layer. In the Arctic domain, upward fluxes of heat and salt from the deep Atlantic layer are largest in the frontier region, where the stratification is weaker. Source: Lind et al. (2018)

But, in recent years, scientists have documented the “Atlantification” of the Barents sea as an increased inflow of Atlantic water has enlarged the area where sea ice cannot form. This has resulted in decline in ice extent on the Barents Sea, particularly in eastern areas.

Using decades of data collected from ships and satellites, the new study investigates the causes behind these changes, finding that they are, ultimately, caused by rising temperatures in the Arctic and the associated decrease in sea ice.

Sea ice plays a key role in keeping the northern Barents Sea in its Arctic climate regime. In addition to the sea ice that forms on its surface, the region receives an “import” of sea ice each year, blown in from the central Arctic by the wind.

When the imported sea ice melts in spring and summer, it provides an influx of freshwater to the Barents Sea. This cold, fresh water top-ups the Arctic layer of the northern region, helping to maintain the stratification that works as a barrier to the warm Atlantic waters below.

But the amount of ice the Barents Sea receives each year is declining. The average annual area of ice import during 2000-15 was around 40% smaller, on average, than during 1979-2009, the study finds. The decrease in volume of sea ice imported “was even larger”, the study says, at approximately 60%.

This is in line with the observed decline in Arctic sea ice cover more widely in response to rising temperatures, the paper says, which reduces “the probability of large sea ice inflows to the Barents Sea, in both volume and area”. 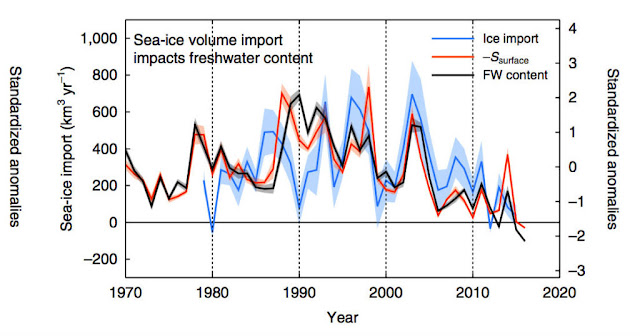 This decline in freshwater content weakens the stratification that separates the overlying cold, fresh Arctic water from the underlying warm and more dense Atlantic water. As the two layers mix, it brings the warm, salty water up from the deep, making it more difficult for sea ice to form the following winter.

This process also helps explain the warming “hotspot” in the northern Barents Sea, says lead author Dr Sigrid Lind, a researcher in physical oceanography and climate science at the Institute of Marine Science and the University of Bergen in Norway. She tells Carbon Brief:

“A likely cause for the Arctic warming hotspot is, therefore, that less sea ice inflows have caused major freshwater loss and weakened stratification, bringing heat and salt up from the deep Atlantic layer, making the Arctic layer warmer, reducing the winter sea ice cover and increasing winter surface air temperature.”

All three layers of the Barents Sea are now significantly warmer than they were in the 1970-99 baseline period, the study finds.

‘First to lose the battle’

The results suggest that supplies of sea ice from the Arctic are necessary to keep the northern Barents Sea “cold, stratified and sea-ice covered”, the paper says.

The findings also point towards a “fundamental shift in the physical environment”, the paper says, where the northern Barents Sea could be “the first [frontier region] to lose the battle against Atlantic water”.

Model simulations suggest that the transition from Arctic-type to Atlantic-type waters in the northern Barents Sea could happen by the end of the century. But it is “likely to happen much faster”, Lind says:

The exact timing will depend strongly on the speed of Arctic sea ice decline and the highly-variable inflow of sea ice to the Barents Sea, says Lind. This could either speed up or slow down the transition.

Such a rapid change would be a “historically rare” moment, the paper says, which has previously only been documented in palaeoclimate studies of the Earth’s long history.

A transition to an Atlantic regime in the northern Barents Sea would have “unknown consequences” for the wider ecosystem, the paper warns.

On the one hand, commercial fish stocks may expand north into new areas – and research shows that Atlantic fish species are already entering the northern Barents Sea during summer. 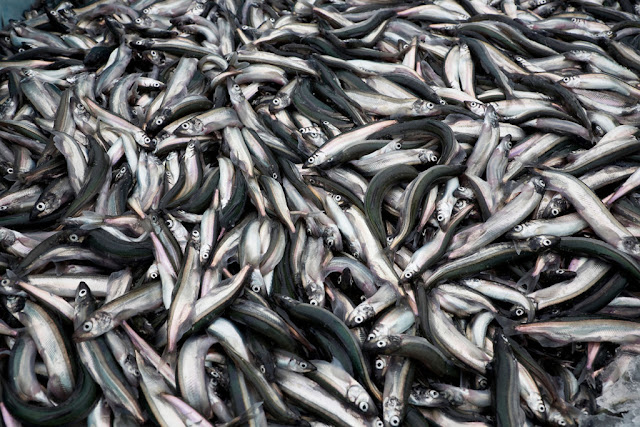 Close-up of the capelin catch in Forteau, Labrador, Canada. Credit: All Canada Photos/Alamy Stock Photo.
However, it is not known how the loss of an Arctic ecosystem will affect Atlantic species. For example, “the capelin – a key prey for several commercial fish species – feed on species that are linked to the sea ice edge,” notes Lind.

In addition, the situation for the creatures that currently enjoy the Arctic conditions of the Barents Sea could “become critical”, says Lind:

“The Arctic ecosystem in the northern Barents Sea have species that are adapted to the cold, stratified and sea-ice covered Arctic climate, including ice-associated marine mammals.”

Prof Igor Polyakov of the International Arctic Research Center, who was not involved in the research, agrees that the impacts could be considerable. He tells Carbon Brief:

“The discussion presented in the manuscript rightly states that this region may soon be transferred from an Arctic to an Atlantic type of climate. Consequences of these changes may be widespread and dramatic.”

And, despite the uncertainties around the timing of the outcome, the study has a “solid base”, thanks to the set of “excellent” temperature and salinity observations and satellite data for the Barents Sea, adds Polyakov.

A huge stretch of the Arctic Ocean is rapidly turning into the Atlantic. That’s not a good sign 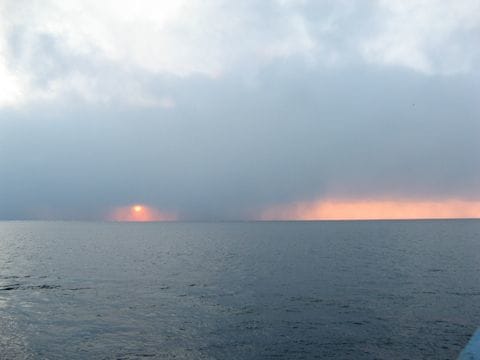 Scientists studying one of the fastest-warming regions of the global ocean say changes in this region are so sudden and vast that in effect, it will soon be another limb of the Atlantic Ocean, rather than a characteristically icy Arctic sea.

The northern Barents Sea, to the north of Scandinavia and east of the remote archipelago of Svalbard, has warmed extremely rapidly — by 2.7 degrees Fahrenheit just since the year 2000 — standing out even in the fastest-warming part of the globe, the Arctic.

“We call it the Arctic warming hot spot,” said Sigrid Lind, a researcher at the Institute of Marine Research in Tromso, Norway.

Now Lind and her colleagues have shown, based on temperature and salinity measurements taken on summer research cruises, that this warming is being accompanied by a stark change of character, as the Atlantic is in effect taking over the region and converting it into a very different entity.....
Posted by seemorerocks at 18:09