"The situation is extremely critical," eight missing hundreds of others evacuated as Cyclone Mekunu hit Yemen's island of Socotra 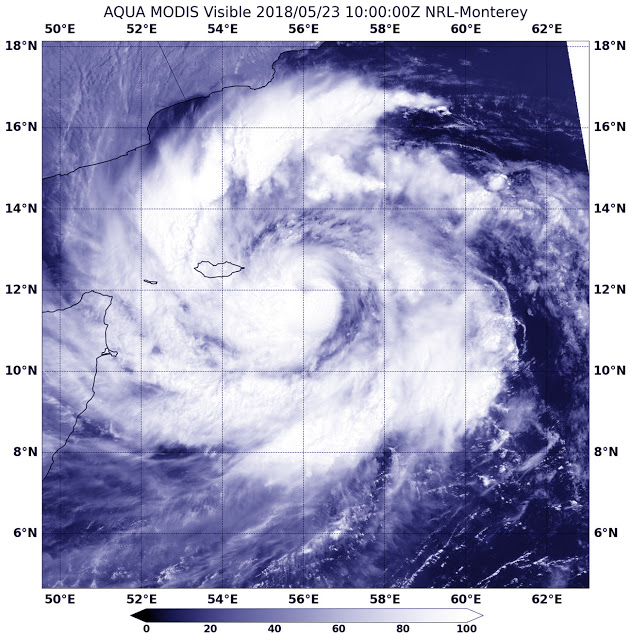 On May 23, NASA’s Aqua satellite captured a visible light image of Mekunu.
The image showed the low-level centre of circulation southeast of Masirah Island, Oman.

A band of thunderstorms in the western quadrant stretched over the island and skirted Oman’s mainland coast.

Eight people were missing and hundreds of others evacuated from their homes as Cyclone Mekunu hit Yemen's island of Socotra on Wednesday night.

Four of the missing were crew on board a boat that sank in the Arabian Sea and are suspected to be dead.

At least three vessels have gone off the radar, a source told The National.
The cyclone has caused severe flooding and damage to houses, bringing with it strong winds and thunderstorms.

"The situation is extremely critical," said the former governor of the island, Salem Abdullah Al Socotri.

"The roads are flooded, and we cannot get out of [the northern coastal town] of Hadibu to see what is going on in other areas of the island.

Also, the strong winds have intercepted telecommunications, so we are almost isolated."

Mr Al Sacotri said the operations and control room in Hadibu received information that a cargo ship sank about 80 kilometres off the shore of the island.

"According to our data, the ship was coming from Mukalla, and we still don't know whether or not the crew survived," he told The National.

The homes of some residents in Socotra have been completely destroyed after the cyclone hit the island.

"Some families who had to evacuate their homes have gone to mosques and schools for shelter because their mud-built residences had collapsed, the structures were not strong enough," Abdulrahman Juman, a Yemeni activist and volunteer, said.

Odd and Dangerous Mekunu Bears Down on Oman

This year, two tropical cyclones have sprung up in the Western Arabian Sea. A region where, according to our understanding of climate, “storms do not form.” Well, the climate has clearly changed. Because a storm is raging there now. And for Oman today, these changes bring with them serious threats to life and property.


(Discussion of how climate change has altered tropical cyclone formation and intensity dynamics in the Western Arabian Sea during 2018.)
About five days ago, tropical storm Sagar formed east of Somalia in the Western Arabian Sea near the Gulf of Yemen. The storm was notable due to the fact that it was the furthest west a storm had ever formed in this region, according to records. The storm then dumped copious amounts of rainfall over Somalia — resulting in the loss of 34 lives.

Just a few days later, a second storm, Mekunu formed in about the same region. Tracking north, it is now threatening Oman with the potential to hit category 2 intensity. Unlike Sagar, Mekunu poses a triple threat due to expected very heavy rainfall, large waves, and storm surge. 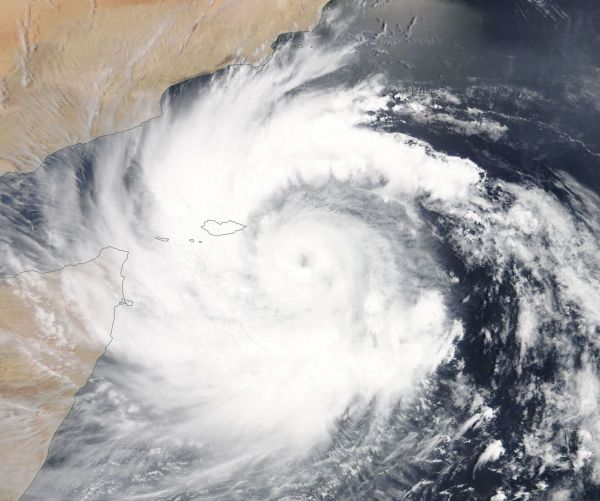 The region near Salalah Oman that the storm is barreling toward — typically receives just five inches of rainfall per year. But Mekunu could deliver two to five times that amount (or more) in just a few days. Moreover, the flat coastal plain is backed by mountainous terrain to the north. The higher land produces lift that will intensify expected rainfall. And current models predict that more than two feet of water (24 inches) could fall on up-sloping regions facing Mekunu’s advance. What’s notable is that these totals keep rising and that peak local totals for the storm in the NOAA NCEP model show some ridiculous amounts — up to 74 inches (see below).

Why are peaks in this model so high? First, sea surface temperatures are very extreme throughout the region. In the immediate vicinity of Mekunu, ocean surfaces range from 30 to 32 degrees Celsius. The waters are about 1 to 2 C above normal and are thus providing Mekunu with a lot more moisture than is typical. However, the larger environment that Mekunu is feeding off of also has much higher than typical moisture loads. For one, sea surfaces east of Somalia have spiked to as much as 5 C above average recently — pumping out great loads of evaporation. Further, moisture levels over the Arabian Peninsula are high due to moisture streaming in along a rather intense subtropical Jet Stream moving over the also much warmer than normal sea surfaces in the Med. The result is a much higher than normal rainfall potential. 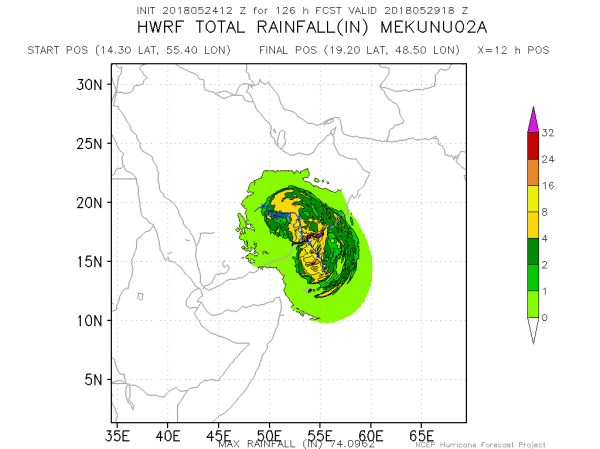 Such heavy rains would flush floods of water into lowlands already confronted with high waves and rising seas. According to a recent report by Bob Henson at Weather Underground, wave heights could reach 24 feet along the coast. The same report cites storm surge expert Dr Hal Needham who states:

The significant wave height leads me to think coastal flood potential is a real threat. At some point the water from waves crashing onshore does not have time to drain before the next wave hits. My gut feeling is that we could see a noticeable storm surge that is quite dynamic, with a lot of wave action and rapidly moving water. Expect wave heights to be tremendous.

(Much warmer than normal sea surface temperatures in the Mediterranean and Arabian Seas are helping cyclones to form in atypical regions even as they are lending fuel to their intensification. Image source: Earth Nullschool.)

Mekunu’s intensity is certainly quite high. And it is one of a recent spate of storms to impact the region. With research showing that the intensity of storms in the Arabian Sea has increased during the past 20 year period. However, the far western formation of Mekunu and Sagar add a new twist to the story. For it appears that the zone of storm formation is also shifting westward as sea surface temperatures rise and, apparently, Jet Stream changes have the potential to deliver higher levels of atmospheric moisture to the Arabian Peninsula. All of these factors feed both storm formation and intensity potentials