Are Trumps's supporters abandoning him

Is Trump’s core base abandoning him?
Giving voters a choice only between unacceptable candidates in both Parties could turn out to have been a prelude to revolution 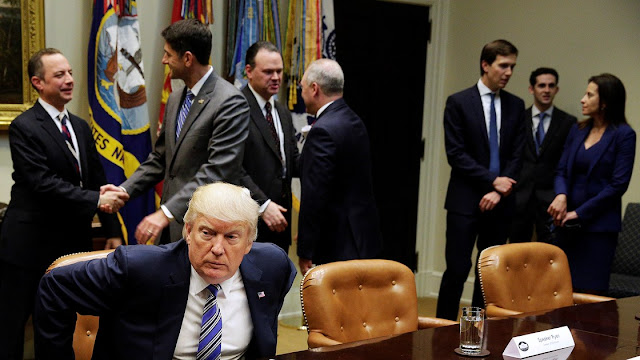 The most reliable online real-time measure of Donald Trump’s base voters’ ongoing support for him is at Breitbart News, the reader-comments to their top Trump headlines, as listed under the “Comments” section as “Sort by Best.”

At the very top of their news on March 23rd was the following headline, followed by the top “Sort by Best” comment and the responses to it, each of which also indicates the net number of up-votes by the site’s readership:

Oh he is right, his presidency just came to a screeching halt, he can GFH!!! All done with the Trump train, just got run over by it!!

Doctor Nefario > ricocat1 • an hour ago

I’m done with Trump. He let us down. People were not shouting “Build the Military” at his rally’s, they were shouting “BUILD THE WALL”. Swamp dwellers McConnell and Ryan finally did it. They figured out how to split Trump’s base and bring him down.

Go ahead. Impeach Trump. I don’t care anymore. Bring on President Pence to pick up the pieces and shoulder on.

What this means is that increasing the size of the U.S. Government’s debt is, to Trump’s main base of political support (as reflected by the biggest online news-site that informs his electoral folllowing), absolutely unacceptable.
The day’s second-biggest news-story was:

The move was largely hailed by conservatives — even though some criticized his support for the Iraq War. Bolton is known to be a hawk on North Korea — he has even recommended a pre-emptive attack on the regime if it continues to threaten the U.S. — and his addition to Trump’s foreign policy team sends a strong message ahead of negotiations between the president and North Korean dictator Kim Jong-un.

Liberals panicked, and advised each other to do so.

Nothing worse or better than Liberals walking around with WEDGIES….

I thought all of Zero’s acolytes wanted to bomb, rape & pillage the world. Zero bombed the most countries ever and all those insane leftists / progressives loved him for it!!

So now these leftists / progressives are anti-war? After complete silence during Zero’s entire “reign of error”? What utter hypocrites!

Not to mention that most of those on the left voted for that war.

After 8 years of OdumbSH!T the world is more dangerous, including America !

President Trump is probably finished regardless IF he signs the $1.3 TRILLION Omnibus bill.

So: The federal-debt issue is killing Trump politically. His voters don’t much care whether he starts World War III by his respecting and appointing such people as the super-neoconservative John Bolton. Bolton’s being loathed by “The libbys” (liberals) convinces Trump’s followers that Bolton is “the right man for the job.” By stark contrast, they’re rabid against Trump’s signing the Government’s budget bill. And, to them, that’s a much bigger issue than whether there will soon be a WW III.

If Trump’s poll-numbers fall as a result (as I expect they will), then Trump himself will come to be unacceptable to congressional Republicans, who are nervous about keeping their seats. A likely consequence would be a 25th-Amendment removal and replacement of him by the consistently far-right Vice President Mike Pence.

This would not require any impeachment of Trump. A President Pence would likely promise to slash federal spending but likely retain Trump’s new neoconservative foreign-policy team, and many of Trump’s other appointees.

However, getting the Democrats to join in his military invasions would be unlikely unless the initial uptick in that White House’s approval-ratings appears likely to last. I doubt that it would.

It seems that we’re heading into chaos in Washington. Giving America’s voters a choice only between unacceptable candidates in both Parties could turn out to have been only a prelude to revolution.