Wishful thinking? Is the circle closing around the Clintons?

I’ll believe this when it happens, but I’ll post this nevertheless.

BREAKING: FBI agents Arrive In Little Rock – IT HAS BEGUN 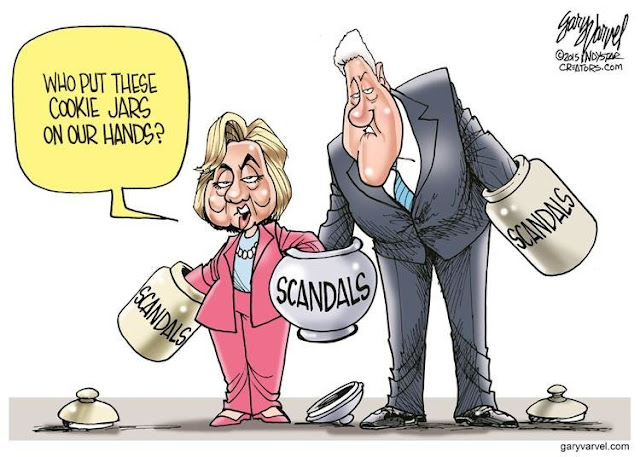 Bill and Hillary Clinton thought they had finally gotten away with the numerous crimes they have committed. Unfortunately for them, however, President Donald Trump just let them know they were dead wrong by sending the FBI to their hometown of Little Rock, Arkansas.

The Hill reported that now that former FBI Director James Comey is finally out of the way, the Department of Justice is going after Hillary. The DOJ just announced that it has just launched a new investigation into whether the Clinton Foundation engaged in any pay-to-play politics or other illegal activities while Hillary was Secretary of State.

FBI agents in Little Rock, where the Clinton Foundation was started, have taken the lead in this new probe. These agents have already interviewed at least one witness in the last month, and law enforcement officials said additional activities are expected in the coming weeks.

FBI officials explained that the investigation is examining whether the Clintons promised or performed any policy favors in return for largesse to their charitable efforts or whether donors made commitments of donations in hopes of securing government outcomes. They added that it may also look into whether any tax-exempt assets were converted for personal or political use and whether the foundation complied with applicable tax laws.

One witness who was interviewed by the FBI for this probe described the session as “extremely professional and unquestionably thorough,” adding that it focused on questions about whether donors to Clinton charitable efforts received any favorable treatment from the Obama administration on a policy decision previously highlighted in media reports.

The witness, who spoke on condition of anonymity, said that the agents interviewing him were from Little Rock and their questions focused on government decisions and discussions of donations to Clinton entities during the time Hillary led President Barack Obama’s State Department.

Unsurprisingly, Hillary’s chief spokesman Nick Merrill immediately released a statement slamming the FBI for reopening the investigation, calling the probe “disgraceful” and suggesting it was nothing more than a political distraction from President Donald Trump’s Russia controversies.

“Let’s call this what it is: a sham,” Merrill said. “This is a philanthropy that does life-changing work, which Republicans have tried to turn into a political football. It began with a now long-debunked project spearheaded by Steve Bannon during the presidential campaign. It continues with Jeff Sessions doing Trump’s bidding by heeding his calls to meddle with a department that is supposed to function independently.”

Clearly, Hillary is panicking about this, as she sees the walls closing in on her and is undoubtedly realizing that she. may be heading to prison in 2018. SHARE this story if you think Hillary Clinton should be LOCKED UP!

Posted by seemorerocks at 10:57