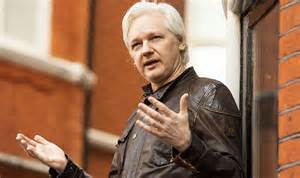 
Julian Assange could walk free from the Ecuadorian embassy within hours, since he has asked a London court on Friday to drop an arrest warrant stemming from his breach of bail conditions.

The WikiLeaks founder has been holed up in the embassy since 2012 to avoid extradition to Sweden over an allegation of rape, which he denies.

Swedish prosecutors have since decided to drop the rape investigation into Mr Assange, but British police have said he would be arrested for breaching bail conditions should he leave the building. He faces up to a year in jail if convicted.

A spokesman for Britain’s Crown Prosecution Service said: “He is seeking to have the warrant of arrest discontinued because the Swedes have confirmed that the extradition warrant is no longer live.

“He is seeking that therefore the warrant of arrest should be taken out as well.”

Asked if a successful ruling could enable Mr Assange to walk free, the spokesman replied: “hypothetically yes, that would be our interpretation”.

Earlier in January, Ecuador granted citizenship to Mr Assange, calling the measure “one more ring of protection” for the WikiLeaks boss.

The Government earlier refused a request for Mr Assange to be given diplomatic status, which could have given him immunity from arrest.

The Ecuadorian embassy is in negotiations with the UK government in an attempt to end the stalemate.

Mr Assange, an Australian computer programmer, has described the period since his initial arrest as a “terrible injustice”.

Not being able to see his children grow up was “not something I can forgive”, he said.

In recent days, doctors have raised concerns about the impact of his long-term embassy stay on his health.

In 2016, a United Nations panel said Mr Assange was under arbitrary detention.

For several years after his arrest the Metropolitan police officers maintained a constant watch of the embassy, costing taxpayers at least £11.1m, according to figures released by the police in June 2015.

Four months later, the force called off its vigil, saying the response was not proportionate.