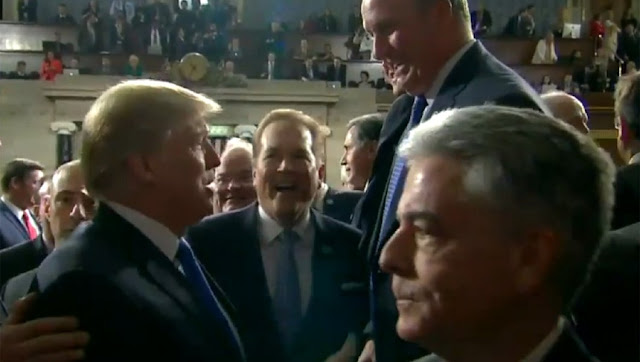 President Trump told a Republican lawmaker he will “100 percent" release a classified intelligence memo written by GOP members on the House Intelligence Committee, as he left his first State of the Union address.


Duncan’s office did not immediately respond to a request for comment.

By invoking an obscure congressional rule Monday night, the GOP lawmakers on the panel were able to vote along party lines to release the GOP-gathered memo despite objections from the Democratic minority. Now, the decision is in President Trump’s hands, who now has a maximum of five days to explicitly object to the memo’s release.

Despite signals from the White House that they are for “full transparency” on the memo, the Justice Department and FBI still have time to lobby the president against its release.

Should Trump object to its release, the full House can override his decision and make the memo public. Trump can also release the memo on his own between now and the five-day deadline, which began Monday night after the committee's vote.

The memo reportedly alleges that senior Justice Department and FBI officials abused the process of obtaining a warrant under the Foreign Intelligence Surveillance Act, the classified surveillance program, specifically that of former Trump campaign aide Carter Page in early 2017.

White House press secretary Sarah Sanders said Tuesday there are "no current plans" within the Trump administration to release a contentious memo that allegedly accuses the Justice Department and FBI officials of abusing power.

"Contrary to a published report, there are no current plans to release the House Intelligence Committee's memo," Sanders said in a statement. "The president has not seen or been briefed on the memo or reviewed its content."

A Republican strategist named Michael Morrison erroneously reported Tuesday afternoon that Trump had "ordered the release of the memo after his ... speech."