I do NOT share the rosy view of Trump. I am only reporting 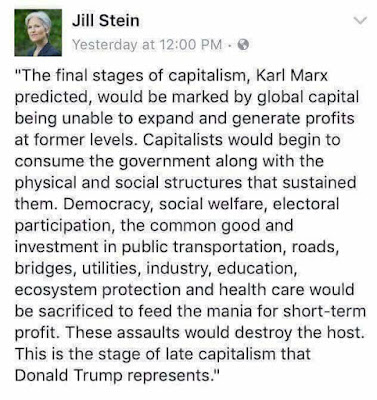 Jill Klein is right and Karl Marx even more so.

However, it is not about Trump. You could easily say that Bush (pl), the Clintons, Obomber all are symbols of late-stage capitalism.

Trump is merely the latest iteration and I believe he is the Chosen One to bring the whole pack of cards.

Where Stein gets it so wrong is there is no glorious workers’ revolution at the end of it. Only the collapse of Empire, collapse of the USA and the end of civilisation (at the vey least).

President Donald Trump flew to Davos for the World Economic Forum, and completely electrified it, according to reports.

Although the “America First” slogan had raised concern in the global economic community that this meant the United States would disregard the needs and concerns of other world economic powers, the President dispelled this worry handily.  Members of his cabinet had been in Davos a bit before his arrival, and were involved in interview and panels already, and when he arrived, he and his assistants were able to explain more what this philosophy actually means.
“America first is not America alone”, said Gary Cohn, the president’s economic adviser.  The point of this idea is not for the United States to dominate and control the world, but in Trump’s view, to make better deals and better trade agreements around the world, and to also cement and strengthen the diplomatic relations between the USA and her allies, most notably England and Israel.


The President met with both Prime Ministers Netanyahu of Israel and Theresa May of the United Kingdom.  In each meeting he affirmed the very close ties between nations, and also waved away the rumors that the US and Britain were in a fractious state with one another in his meeting with PM Theresa May.

The American president also gave a firm, but inviting message to the Palestinian Authority to return to the negotiations needed to secure a peaceful relationship between both Palestine and Israel. Since the United States historically provides aid to both countries, and since the Palestinians were demonstrably upset with the Americans’ formal recognition of Jerusalem as the capital city of Israel, Trump gave a strong, direct push in his statements on the issue.

Predictably, there is resistance to Trump’s approach in the global community. As shown in the clip above, the common claim is “you cannot do it alone” and this is the thought that is often ascribed to Trump, and to the United States as a whole, that the country acts like an Empire and not a brother player in world affairs.

While there is certainly food for this thought, most notably in foreign policy structures regarding Syria, Ukraine and Israel, it appears that when one has a direct encounter with the American president, much of the fear of this is dispelled. One is led to a bit of optimism at these times, that maybe this leader really is trying to fix a broken set of policies from within, piecemeal. It has certainly looked this way at the Davos conference thus far.
Posted by seemorerocks at 10:27