Neo-cons hope for a larger war in Syria 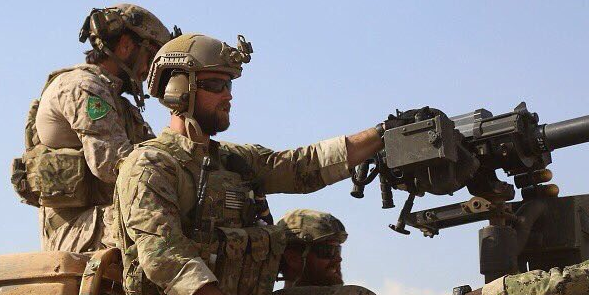 
The U.S. polity and media now acknowledge what we reported on December 21. The U.S. announcement to build up a 30,000 strong PKK army in north-east Syria was a disaster. It prompted Turkey to initiate its attack on YPG/PKK Kurds in Afrin. It threatens do drive it out of NATO and into Russia's open arms. It gives the Syrian government new leverage against the Syrian Kurds.

Under Turkish threats to attack U.S. forces in Syria the Trump administration had to pull back- at least in its rhetoric. Independent of who rules Turkey the country will never acquiesce to an armed Kurdish entity on its southern border. The U.S. should have know this.

This failure of the Trump administration's plan has prompted a new push from neoconservative propagandists for a full U.S. war on Syria and its allies. The lobby shop of the Kagan family, the Institute For The Study of War, had its junior staff pen an op-ed for Foxnews to argue for a new study object:

It's time for Trump to face reality in Syria

The U.S. must rapidly change how it is executing policy in five key areas.

The U.S. must face reality in Syria. It must recognize the threat Russia poses. It must acknowledge the limits of its current partners on the ground. It cannot put faith in a diplomatic charade. It must implement a real strategy against al Qaeda and Iran. And it must recognize the value of American action over American rhetoric.
...
It will take a long time and a hard struggle to achieve any outcome in Syria that the U.S. should be willing to live with. It is time to focus on it, devote resources to it, and prepare to do so for a long time.

"For a long time" sounds to me like a multi decade occupation of the Syrian battlefield and the adjacent areas. I doubt that any politician who wants to be reelected will vote for that.

A second neocon op-ed, this by Josh Rogin, was posted at Jeff Bezos' blog: Team Trump must match its new rhetoric on Syria with action.

It is not useful to quote the nonsense but here are some of the rhetoric figures it uses:

... the will and leverage needed to lead a solution to the Syrian crisis - defend U.S. interests - confronting the ongoing terrorist threat - Iranian expansion - Bashar al-Assad’s brutal aggression - on-the-ground influence - herculean effort - a contingent that wants to cut and run - a real plan - fundamental flaw - a lack of sufficient leverage on the ground ...

After having set the scene for a massive U.S. occupation of Syria, Rogin claims that "nobody is advocating" a "large increase in U.S. troops". His advice then is to do more of the stuff that evidently just failed: stick to the Kurds, pay some Arab tribes (aka former ISIS), arm rebels (aka al-Qaeda) in Idleb. But then comes the real blopper:

the Trump administration should raise the pressure on Assad, Russia and Iran, including through sanctions, the credible threat of U.S. force and whatever else might persuade them.

Now what please is a "credible threat of U.S. force" against those three countries? And might they have the capability to credibly threat back? Who will win the thermonuclear war over the Tanf desert base in south-east Syria?

A year into Trump’s presidency, his administration is saying the United States has a long-term interest in Syria. The next step is to match those words with action.

I have no doubt that the two op-eds were coordinated. More of this kind will likely come. The common theme is "action" and - while not openly said - they demand a larger U.S. war over Syria. The unmentioned beneficiary of such a war, next to the weapon producing financiers of those writers, would be Israel and Saudi Arabia.

The neoconservative writers and their op-eds should be ignored. But the war on Iraq has shown that there is some serious political power behind them. Now someone in the White House will have to pick up those arguments and try to convince Trump with them. Who will that be and will s/he be successful?