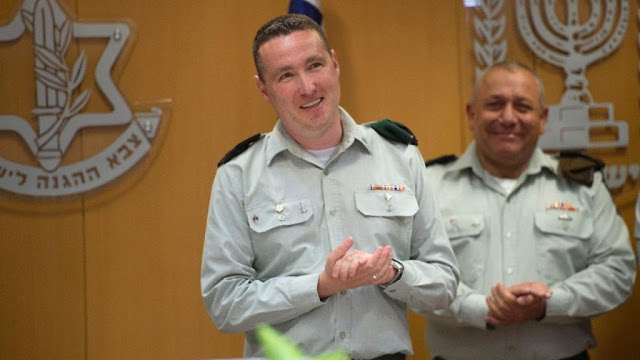 DF Spokesman Brig.-Gen. Ronen Manelis warned in a rare op-ed on a Lebanese opposition website that a war with Israel could break out if Iran develops precision missiles in the country.

“Lebanon has become - both by its own actions and omissions and by a blind eye from many members of the international community - one large missile factory,” Manelis wrote on the Ahewar website.

"It's no longer a transfer of arms, funds or consultation. Iran has de-facto opened a new branch, the 'Lebanon branch.' Iran is here," he said.

“In Lebanon, Hezbollah does not conceal its attempt to take control of the state,” he continued, adding that “in the shadow of Nasrallah’s bullying behavior” the terror group has built “terror infrastructure and factories to manufacture weapons under the nose of the Lebanese government.”

Israel and Hezbollah fought a deadly 33-day war in 2006, which came to an end under UN Security Council Resolution 1701 which called for disarmament of Hezbollah, for withdrawal of the Israeli army from Lebanon, for the deployment of the Lebanese army and an enlarged UN force in the south.

“This past year (2017), like the 11 years that preceded it since the end of the Second Lebanon War, was characterized by relative stability on the Lebanese front. This quiet is for the benefit of residents on both sides,” Manelis wrote. “The fact that northern Israel and southern Lebanon have children who have not heard an alarm in their lives is a significant achievement of the Second Lebanon War, and the best proof of the stability of Israeli deterrence and the burning memory among the Lebanese about the magnitude of Nasrallah's previous mistake.”

Nevertheless according to IDF assessments, Hezbollah has since rebuilt its arsenal with at least 100,000 short-range rockets and several thousand more missiles that can reach central Israel. In addition to a massive arsenal of rockets and missiles, Hezbollah is able to mobilize close to 30,000 fighters and has flouted its tunnel system, complete with ventilation, electricity, and rocket launchers.

Hezbollah has also increased its military capabilities due to its fighting in Syria on the side of President Bashar Assad, and has spread its troops across the entire Middle East.

“The past year has been further proof that Hezbollah serves as an operational arm of Iran. In every place where there was instability, we discovered the fingerprint of Iran and everywhere we discovered Hezbollah's involvement,” Manelis wrote.

Some 200 villages in south Lebanon have also been turned into “military strongholds” from which Hezbollah militants are able to watch Israeli soldiers at any moment.

“The ordinary citizen will be mistaken to think that this process turns Lebanon into a fortress, it is nothing more than a barrel of gunpowder on which he, his family and his property are sitting,” Manelis said in his op-ed on Sunday.

“One in every three or four houses in southern Lebanon is a headquarters, a post, a weapons depot or a Hezbollah hideout. We know these assets and know how to attack them accurately if required.”

Israeli officials have repeatedly voiced concerns over the smuggling of sophisticated weaponry to Hezbollah and the growing Iranian presence on its borders, stressing that both are red-lines for the Jewish State.

Senior officials from Israel’s defense establishment have repeatedly stated that while the chance of escalation on the border is low, the smallest incident or a miscalculation by either side has the possibility to lead to conflict.

“The future of Lebanese citizens is in the hands of a dictator who sits in Tehran,” Manelis wrote, adding that “I think it is right to warn the residents of Lebanon of the Iranian game in their security and in their future.”

In September, Israel carried out its largest military exercise on the northern border in 20 years with tens of thousands of soldiers from all branches of the army simulating a war with Hezbollah.

“The past year has been used by the IDF to significantly improve preparations for war on the northern front,” Manelis wrote. “If our enemies understood how much we knew about them, they would be deterred from entering into another conflict for many more years to come.”