The colour revolution in Iran fizzes 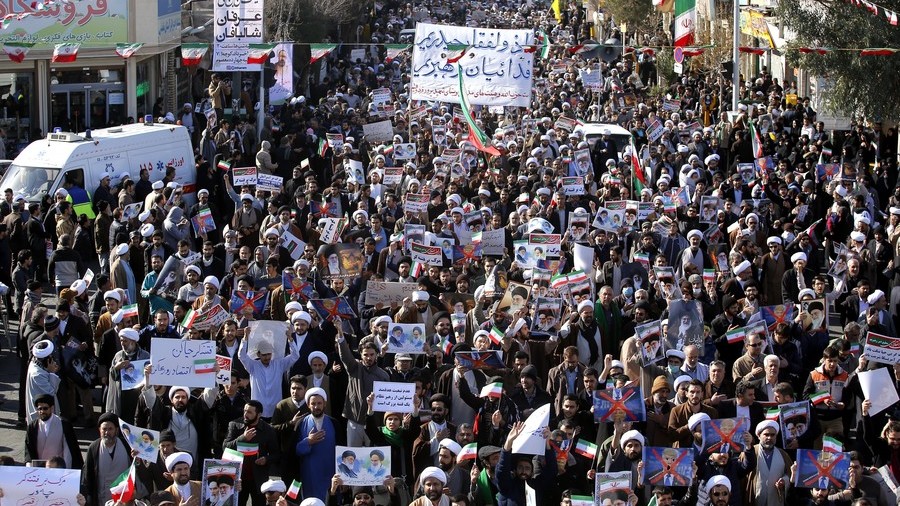 By calling a UN Security Council meeting with the demand to support anti-government protesters in Iran, the US is trying to bend the UNSC mandate, which does not deal with countries' internal affairs, Russia's UN envoy has said. 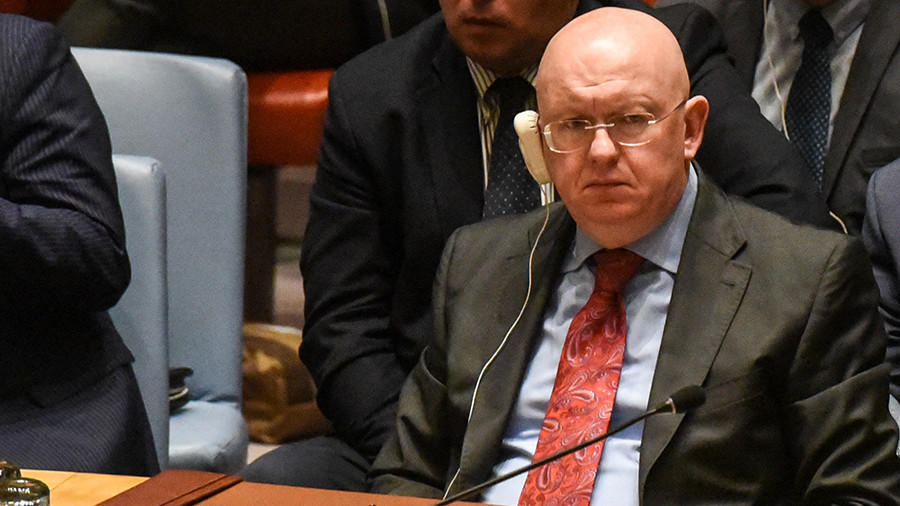 “We obviously regret the loss of lives as a result of the demonstrations that were not so peaceful. However, let Iran deal with its own problems, especially since this is precisely what’s taking place,” Russia's envoy to the UN Vassily Nebenzia said.

He slammed the US for diverting attention from important international issues the UN Security Council should be addressing.

“You are dispersing the energy of the Security Council, instead of focusing it on dealing with key crisis situations in Afghanistan, Syria Libya, Iraq, Yemen, DPRK, the African continent. Instead of that, you are proposing that we interfere in the internal affairs of a state."

The reaction to the minor protests in Iran drive another wedge between the U.S. and Europe. It exposes the belligerence of the Zionist lobby and its influence in the U.S. media and politics. The issue shows the growing divergence between genuine U.S. interests and the interests of Israel.

Some anti-government demonstration and attacks on public institutions continue in Iran. But, as the graph shows, such protests and riots continue to decrease. Yesterday's events took place in only 15 places while, since December 28, a total of 75 towns and cities had seen some form of protest or incidents. Additional to these several pro-government marches took place yesterday each of which was by far bigger than the anti-government events. 
The violence against public property by some young rioters has alienated the original legitimate protesters who haveample economic reasons to reject the neo-liberal policies of the current Iranian government. The instigating of violence from the outside of Iran, likely due to CIA machinations, has robbed them of their voice.

I had earlier asked:

Why is the U.S. doing this?The plan may well be not to immediately overthrow the Iranian government, but to instigate a sharp reaction by the Iranian government against the militant operations in its country. ... That reaction can then be used to implement wider and stricter sanctions against Iran especially from Europe. These would be another building block of a larger plan to suffocate the country and as an additional step on a larger escalation ladder.

The administration just called for a UN emergency session about the situation. That is a laughable move ...

Laughable indeed. Other members of the Security Council and the UN Human Rights council have rejected the U.S. plans. It is not the UN's business to insert itself into internal affairs of any country. But even for those who believe that the UN has a right to intervene, the protests in Iran, estimated at no more than 15,000 people at any time and maybe 45,000 in cumulation, are way too insignificant to justify any UN reaction.

The European Union, main target of U.S. plans to again push for sanctions on Iran, has officially rejected any such attempts. The Swedish Foreign Minister said that these are "unacceptable" and that the situation does not qualify for any such move. The French President Macron warned (French) that breaking relations with Iran would lead to war. He was quite explicit (machine translation) about the actors behind such moves:

France has firm relations with the Iranian authorities but wants to keep this link "because what is being done otherwise is that it is surreptitiously rebuilding an 'axis of evil'," said the president.
.,..
"We can clearly see the official speech that is made by the United States, Israel, Saudi Arabia, which are our allies in many ways, it is almost speech that will lead us to the war in Iran." he added, pointing out without further details that it was a "deliberate strategy of some".

Russia's Foreign Minister warned the U.S. against any interference in Iran's internal affairs.

Meanwhile a Saudi flagship paper, Al Arabiya, is challenging The Onion as it asserts that Iran has called up Hizbullah, Iraqi units and Afghan mercenary to quell the protests.

In a Washington Post op-ed Vice President Pence rants about the Obama administration's alleged lack of reaction to protests in Iran, but announces no reaction by the Trump administration. The Washington Post editors add several op-eds by pro-Zionist lobbyists bashing Iran and blaming Europe for not following Trump's line.

The anti-Iranian Foundation for Defense of Democracies which is financed by an extreme Zionist speculator, is given plenty of space in U.S. papers:

Adam H. Johnson @adamjohnsonNYC - 4:04 AM - 3 Jan 2018
in past 72 hrs radical pro-regime change outfit FDD has had op-eds in NYTimes, Washington Post, NYPost, Politico and WSJ on Iran, repeating in each one the same tired, pro-intervention talking points.

Adam H. Johnson @adamjohnsonNYC - 6:14 PM - 3 Jan 2018
having used up their designated slots in respectable WSJ, WaPo, Politico, and NYTimes for this week, FDD slumming it in Washington Times today. Sad!

The supposedly "centrist" Lawfare blog published a call for handing improvised mines with "Explosive Formed Penetrators" to Iranian protesters. (During the U.S. invasion of Iraq the local resistance made and used such EFPs against the U.S. occupiers. The U.S. military falsely claimed that the EFPs were coming from Iran.) The editor ofLawfare, the notorious Benjamin Wittes, seems to agree with the piece. He, the editor, writes that he never edits anything that is published on his site. His only complain about the piece is that the call to arm rioters in Iran lacks a professed legal reasoning. (One wonders how the Lawfare writers will react when China delivers anti-tank weapons to the nextOccupy Wall Street incarnation.)

It is a big campaign in the U.S. that is accompanying rather small events in Iran. The campaign is designed to create the atmosphere for a war on that country. The media give it ample room. But the U.S. is very lonely in these attempts. Saudi Arabia is a paper tiger that does not count and Israel can not move against Iran. The axis of resistance is ready for a great war, says Hizbullah leader Nasrallah. He explains that such a war would be waged deep within Israel.

Stephen Kinzer points out that U.S. animosity against Iran and its government lacks any strategic reasoning:

History decrees that any Iranian government must be strongly nationalist and a vigilant defender of Shiite Muslims everywhere, so the idea that “regime change” would produce a more pro-American Iran is a fantasy. The security of the United States will not be seriously affected by the course of Iran’s domestic politics.
...
In 1980 President Carter proclaimed that any challenge to American dominance of the Persian Gulf would be considered “an assault on the vital interests of the United States of America.” He was driven by the global imperatives of his era. Much of America’s oil came through the Persian Gulf, and the West could not risk losing it to Soviet power.Today there is no Soviet Union, and we no longer rely on Middle East oil. Yet although the basis for our policy has evaporated, the policy itself remains unchanged, a relic from a bygone age.


Kinzer is right on the lack of a strategic argument. But he neglects the influence of the Zionist lobby and its interest to keep the U.S. involved in smashing any potential adversary to its colonial endeavor. Genuine interest of the people of the United States is not what drives U.S. policy and has not been for some time (if ever).

Neocons Are Salivating, But There Won’t Be a Revolution in Iran Iranian President Hassan Rouhani did the right thing going on television and at least acknowledging popular anger over hard economic times. Inflation is high at 12% but down from 40% at the start of Rouhani’s first term. And the recent increase in fuel and food prices by up to 40% has hardly helped

That was part of Team Rouhani’s 2018 budget, which cuts subsidies for the poor – a key feature of the previous Ahmadinejad administration.
Then there is youth unemployment, which hovers around the 30% mark. Similar figures recently came out of Spain, a member of the European Union. Of course, that explains why the bulk of the protesters are under 25 from working-class backgrounds.

What Rouhani should have explained to Iranians in detail is the direct consequences of hard economic times and United States sanctions, which are affecting the country.

These were coupled with financial threats against western firms now back in business, or at least contemplating opening up operations, in Iran.

Rouhani did promise, after signing the Joint Comprehensive Plan of Action, also known as the Iran nuclear deal, in the Austrian capital of Vienna in 2015 that it would lead to more jobs and stimulate the economy.

While that has not been the case, legitimate protests singling out economic problems have never gone away. In fact, they have been part of the Iranian picture for decades.

If we consider the Islamic Republic experiment, a sort of “theocracy with democratic characteristics,” the most striking element is how deeply rooted it is in the country. I learned this during my many trips to Iran and it has a great deal to do with the basij, or voluntary militias. They have permeated all aspects of social life from unions to student bodies and civil servant groups.

In this respect, there is a strong similarity to China, where the Communist Party is embedded in the very fabric of society.

Talking to young people in places such as Kashan or Mashhad showed me how solid the popular base was behind the Islamic Republic experiment. It was certainly more thought-provoking than listening to ayatollahs in Qom.

Still, what is happening now in Iran is that legitimate protests related to economic hardships have been hijacked by the usual suspects in a move to influence the minority. After all, Rouhani’s administration is comparatively liberal compared to the populist Ahmadinejad government.

So, what we have is a concerted attempt to turn legitimate protests into a “revolutionary” movement with the aim of bringing about a regime change. For all practical purposes, this would be civil war.

Well, it will simply not work. Anyone familiar with Iran knows the country’s civil society is far too sophisticated to fall into such a crude and obvious trap.

For a clear take on the foreign influence angle, you should watch Professor Mohammad Marandi, of the University of Tehran, an academic of absolute integrity, arguing with a former BBC employee on the Qatari-owned Al Jazeera television network.

Indeed, what is certain is that foreign elements are acting as provocateurs to influence the protests. This “whole world is watching” tone is meant to intimidate Tehran’s response.

Yet there has to be a crackdown against the violence as Rouhani strongly hinted. Imagine the police response if the level of violence seen on Iranian streets was happening in France or Germany?

Regime change is unlikely but what is in play is setting the scene for a further renewal of economic sanctions against Iran. Possibly, in this case by the EU. Hopefully, it will not fall into this trap.

Anyway, Tehran is already gearing up to increase business across Eurasia through China’s new Silk Roads, the Belt and Road Initiative, and the Eurasia Economic Union.

In the end, it is up to Team Rouhani to be creative in alleviating the burden on the economic front.
Source: Asia Times