FBI’s McCabe Escorted From The Building

Update: According to Fox News and CBS News's Pat Milton just answered the question of why McCabe stepped down Monday when he would become eligible for his full pension benefits n March: McCabe was reportedly forced to step down. According to Fox News, McCabe was "removed" from his post as deputy director, "leaving the bureau after months of conflict-of-interest complaints from Republicans including President Trump."

In both cases, his early departure suggests that he was forced out. 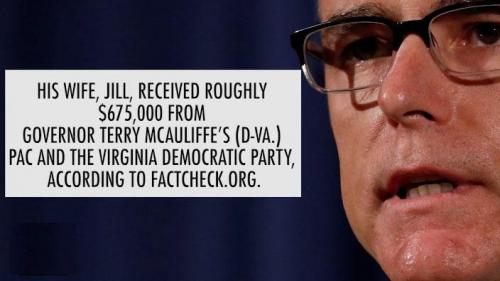 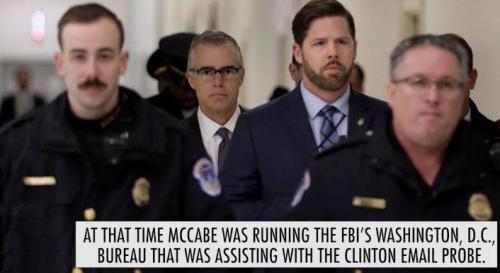 Several media outlets reported that McCabe is using his remaining vacation days to go on "terminal leave" and that his official retirement from the agency won't happen until March, allowing him to collect the full pension.

As we noted last week, FBI Director Wray threatened to resign after being pressured by AG Jeff Sessions.

In a move that was widely expected (although not for another month or so), Deputy FBI Director Andrew McCabe is stepping down effective Monday, NBC reported.

McCabe, who briefly served as acting director last year after Trump fired Comey, first let it slip to the Washington Post late last year that he would be retiring in the coming months as Congressional Republicans targeted him for criticism surrounding his pro-Clinton bias (McCabe's wife even secured campaign funding from Clinton ally Terry McAuliffe, something he initially failed to disclose).

Around the time of the reports of his impending retirement, McCabe had spent several marathon sessions answering questions from Congressional committees behind closed doors.

It was expected that McCabe would hang on until early March, when he would become eligible for his full pension. It's unclear why he's choosing to step down early.

According to Axios, McCabe may be leaving in anticipation of the release of an inspector general's report on how the FBI handled the Clinton email investigation.

On Monday, President Trump refused to acknowledge reporters asking questions about McCabe's decision during a White House press conference. Back in December, Trump tweeted that McCabe was "racing the clock to retire with full benefits."

* * *
According to the Gateway Pundit, McCabe is suspected of leaking details between himself and former Trump Chief of Staff Reince Preibus. The sequence of events, as recounted by the Gateway Pundit, suggests that Preibus might've been "set up" by McCabe. Recall that McCabe set up the meeting to tell Preibus that a New York Times report suggesting widespread collusion between the Trump campaign and the Russians was "bullshit." When Preibus asked McCabe if the FBI could release a statement publicly confirming this, McCabe said he'd need to think about it.

The story leaked to the Times shortly after...
Sean Davis
✔@seanmdav
McCabe told Priebus a big NYT story alleging treasonous collusion was false.
Priebus asked if he could make that public.
McCabe then leaked that Priebus was interfering with the FBI.http://thefederalist.com/2018/01/29/new-book-mccabe-initiated-white-house-meeting-that-led-to-leak/ …

This story suggests how the original Russia narrative may have been spread around to overly compliant journalists and other members of the 'resistance.'
thefederalist.com

The Times piece - which suggested that several Trump campaign officials were in direct contact with Russian government agents - was debunked by Comey during Senate Intelligence Committee.

With this in mind, we're definitely curious to see that inspector general report.

McCabe Forced To Resign Because He

Was Caught Running The Clinton Conspiracy Against Trump