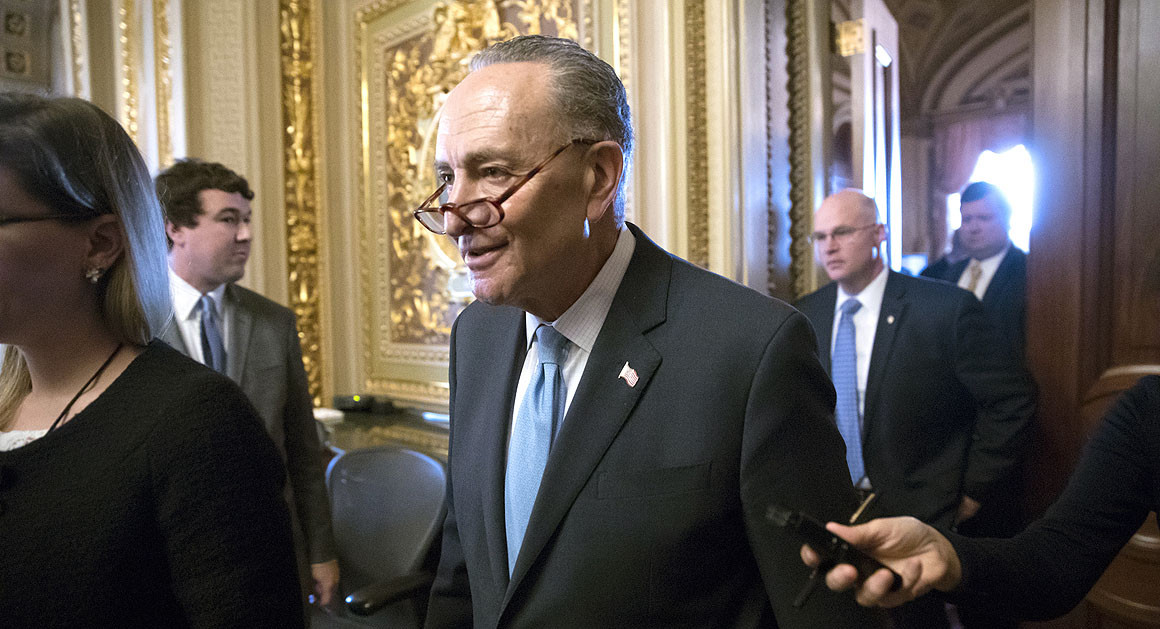 In a move that virtually assures another government shutdown on February 8, Politico reports  that Chuck Schumer has taken his offer for a "spending boost" for Donald Trump’s border wall off the table, a bargaining position that would be a non-starter with the president and Congressional Republicans.

The Senate minority leader, through an aide, informed the White House on Monday that he was retracting the offer he made last week to give Trump well north of the $1.6 billion in wall funding Trump had asked for this year, according to two Democrats. And now they say Trump will simply not get a better deal than that on his signature campaign promise.

Schumer “took it off,” said Illinois Sen. Dick Durbin, the No. 2 Senate Democrat. “He called the White House yesterday and said it’s over.”

In the now-infamous cheeseburger summit last Friday with Trump, Schumer offered a large increase in border wall spending as a condition for a broader deal to help Dreamers. But after that offer was rebuffed — prompting the three-day government shutdown — the president has now “missed an opportunity to get the wall,” one Democratic aide said.

Schumer's pulling of the "offer" comes after a day of angry accusations by progressive democrats and even Nancy Pelosi accusing Schumer of being a "sellout", and caving to the White House in agreeing to reopen government.

“Sen. Schumer’s already indicated that he would go for more. Republicans will go for more,” Flake said. “It’s just how much more we can get from the Democrats.”
Now, they won't be able to get anything, which means that the Dreamer negotiations go back to square one.

Politico confirms as much, reporting that "Republicans aligned with Trump are unlikely to go for any bill that does not offer a major boost in border wall funding, given the president’s strong feelings about the issue. Moreover, Sen. Tom Cotton (R-Ark.) said he was skeptical of Schumer’s recollection of the meeting and the border wall offer anyway."

“They claim that some crazy deal was made,” Cotton said of Democrats. “And then when we say no deal was made, they accuse Republicans and the president of reneging.”

Schumer's gambit appears to be an attempt to get back in the good graces of the progressive wing as "providing border wall money could also push away more liberal Democrats, who prefer to completely restart negotiations rather than start from any existing bill, even a bipartisan one like the proposal written by Durbin and Sen. Lindsey Graham (R-S.C.)"

“Discussions were had coming up to Friday night are interesting for context,” said Sen. Brian Schatz (D-Hawaii). But now, he said, “we start from a blank sheet of paper.”

Should Schumer refuse to budge, not only does it raise the odds of another government shutdown in 2 weeks, but it also increases the chances of a technical default as Goldman explained earlier today:

the [government reopening] agreement does not resolve the underlying issues that led to the shutdown and therefore simply postpones the uncertainty for a few weeks. A further temporary extension is likely to be necessary after February 8, since it is unlikely in our view that Congress will be able to pass an immigration bill by then and we do not expect congressional Democrats to agree to a long-term spending bill without an immigration agreement.

This raises the probability that an upcoming spending deadline overlaps with the debt limit, which we estimate will need to be raised at some point between late February and late March. While financial markets mostly ignored the shutdown, a disruptive debt limit debate could have a more negative impact.

As expected, there has been no reaction in the market.