7.0 earthquake off coast of Alaska 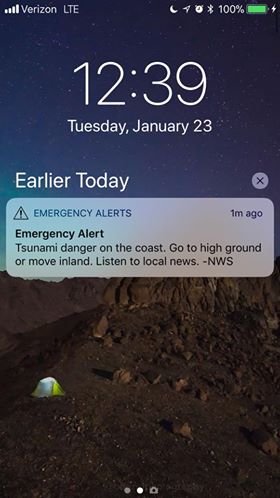 The big quake prompted evacuations and put the North Pacific on alert for possible destructive tsunamis, however the alerts were cancelled just after 4am local time.

The earthquake hit at a depth of 10km at 12.32am local time Tuesday (10.32pm New Zealand time) and was recorded about 280km southeast of Kodiak Island.

It was initially assessed as magnitude 8.2, but the US Geological Survey (USGS) revised it down to 7.9.

John Bellini, a geophysicist with the US Geological Survey's National Earthquake Information Centre, said there had been more than two dozen aftershocks as of about 6.30am local time. The biggest aftershock had a magnitude of 5.3.

Initial fears of a tsunami spread to many US states, with officials warning residents as far south as San Francisco in California to be prepared to evacuate coastal areas.

Messages from the National Weather Service sent to cellphones in Alaska had warned: "Emergency Alert. Tsunami danger on the coast. Go to high ground or move inland."

Elsewhere in the United States, Washington state, Oregon, California and Hawaii were under tsunami watches, which eventually were lifted. Officials in Japan say there was no tsunami threat there.

The earthquake woke Lieutenant Tim Putney of the Kodiak Police Department out of a dead sleep, and he estimated it shook for at least 30 seconds.

"I've been Kodiak for 19 years that was the strongest, longest lasting one I've ever felt," he said by telephone.

He said the police department had received no reports of damage.

Keith Perkins, who lives in the southeast Alaska community of Sitka, arrived at the high school early on Tuesday morning, after an alarm on his cellphone alerted him of the tsunami warning. He said the city's sirens also went off later.

He said people on Facebook were chattering back and forth about whether this was real or not and what they should do.

Given the magnitude of the earthquake, Perkins said he thought it best to head to school, the tsunami evacuation point, even though in the past he felt his home was at a "high-enough spot."

"I figured I'd probably just better play it safe," he said.

He said police officers were directing traffic and the parking lot at the school was filling up. He said he saw some people carrying suitcases or backpacks.

Earlier, New Zealand's Ministry of Civil Defence and Emergency Management said it and GNS Science had been assessing if it had generated a tsunami that could affect New Zealand.

There was no threat of tsunami or coastal inundation, though strong currents or surges might occur in the 24 hours from midday Wednesday, it said
Posted by seemorerocks at 11:35