Back to Franco's fascism in Spain 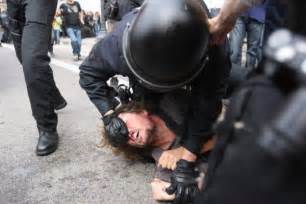 There is a fundamental disconnect between the real Catalonia and the Catalonia the political Establishment and its lackey media want us to believe exists.

All of the major Western broadcasters, plus newspapers like The Guardian, Washington Post and New York Times, have repeatedly pumped out the mantra that it is only a minority in Catalonia that support Independence. They have never attempted to explain why therefore Carles Puigdemont is President, and why the pro-Independence parties got 48% at the last Catalan elections while the Spanish Nationalist parties got 39%.

There is a vital point here. The plan of the Spanish government to force new Catalan elections in January is not obviously going to give a different result. The national spirit aroused by the 2014 Scottish referendum resulted in a huge boost for the SNP at ensuing parliamentary elections. The same is likely to apply. Plus, there are indeed societies in which people en masse which will vote for you if you send armoured thugs to bludgeon their grannies. But I do not think that the Catalans are such a society. Catalans are not likely to have been convinced to abandon their hopes by the actions of the Guardia Civil.

That is not as fantastic as it seems. Spanish ministers have been briefing the media that, if Independence is declared, Puigdemont will be arrested for sedition. Two major Catalan civic society leaders are already imprisoned for the same ludicrous offence, and the Head of the Catalan Police is on trial.

One commodity of which Spain is not in short supply is corrupt, Francoist judges. It will not be difficult at all to find a fascist judge who will rule that campaigning for Independence in itself constitutes “sedition”, and that pro-Independence political parties and pro-Independence campaigning should be banned as unconstitutional, an affront to the sovereign, traitorous and other such nonsense. In fact that seems to be the inescapable logic of the Rajoy position.

Indeed, the calling of a new election makes no sense at all unless the supporters of Independence are banned from contesting it. Many other measures – all an undeniable breach of human rights – are being undertaken to try to reduce the capacity of the Independence movement to campaign. TV and radio stations are being taken over by Madrid, websites and social media communication blocked. The banning of pro-Independence parties really is not a very large step further down the road. Meanwhile Rajoy has almost certainly concluded that there is no breach of human rights so blatant that other European governments will not back it as the “rule of law”.

There is no sense in which the current hardline moves of the extremist Spanish nationalists in power in Madrid will end the crisis in Catalonia. They will merely plunge it into a much more vicious phase.