1 million Syrians Return to Their Homes

The Russian air campaign in Syria, which started two years ago, has dramatically changed the course of the Syrian conflict as life begins to return to the country. 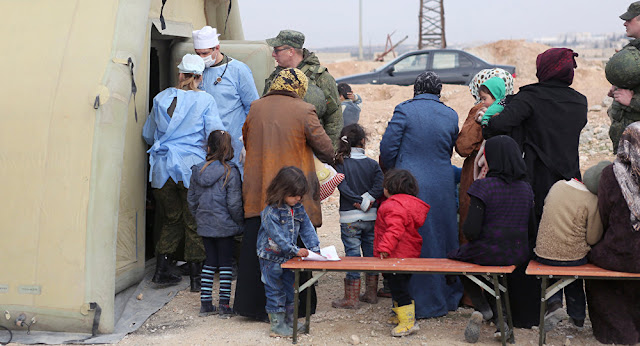 The Russian Reconciliation Center for Syria reported on Thursday that since the beginning of the Russian anti-terrorist aerial campaign in Syria two years ago, more than one million Syrian citizens have received the opportunity to get back to normal life in their motherland.

Turkish soldiers stand near armoured vehicles during a demonstration in support of the Turkish army's Idlib operation near the Turkey-Syria border near Reyhanli, Hatay, on October 10, 2017

The Syrian settlement process resulted in more than 232,000 refugees returning from abroad since September 2015, while 143,000 of them returned back to their own homes this year, according to the Center. Since the beginning of the year, 480,000 Syrians from camps for internally displaced people have settled in the territories liberated from terrorists.

Russian servicemen noted that terrorists left thousands of schools, hospitals and factories devastated and although Russian support is essential, the international community also has to consolidate its efforts. All conditions for it have already been created and the Reconciliation Center for Syria is ready to assist.


US Strategic Plans for Kurdistan Exposed

The US seems to reveal their plans for future Kurdistan being in Eastern Syria. At least that seems to the plan based on the current stance the US takes allowing the Iraqi army to drive Kurds in the direction of the Syrian border.

Posted by seemorerocks at 13:01