War With North Korea is "Inevitable" even if millions die

"Hal Turner Remark: I completely disagree with the so-called experts. Kim Jung Un is not rational at all. He machine-guns-to-death even his own family members who oppose his ideas. There is nothing rational about him at all."


This is the view from the right with its "America First" attitude. This is partially correct but having nukes is North Korea's ONLY defence from a fate such as Saddam Hussein or Gaddafi.

The threats are almost entirely from the American side.

Of we are talking about who is "rational", Trump, the neo-cons and the American Deep State are certainly not. They are determined to take this world to war.

I doubt if the Chinese or the Russians will stand idly to one side while the Americans go in to destroy millions of Korean lives.

Senator Graham: War With North Korea is "Inevitable" even if millions die 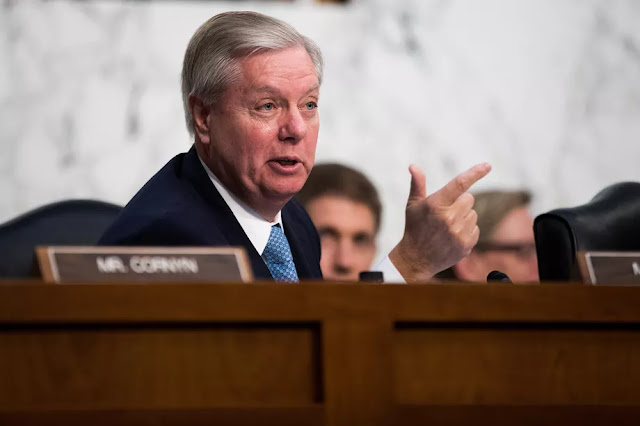 
On Tuesday morning, Sen. Lindsey Graham said that President Trump is willing to go to war with North Korea to stop it from being able to hit the American mainland with a nuclear weapon. The President said he is willing to bomb North Korea and more.

“There is a military option: to destroy North Korea’s nuclear program and North Korea itself,” Graham told the Today show’s Matt Lauer. “He’s not going to allow — President Trump — the ability

Graham’s press office confirmed that the senator was, in fact, reciting the details of a conversation he had with the president. According to Graham, the president “doesn’t want a war” — but would be willing to start one that would kill millions of people in the region if it came down to it.

Graham went even further later in the interview, saying war between the United States and North Korea was “inevitable” under this president unless North Korea stops testing intercontinental ballistic missiles (ICBMs). These missiles, Graham says, are an unacceptable threat to the American homeland — so Trump would go to war to stop them:

LAUER: Are you saying it’s okay to use a military option that immediately endangers the lives of millions of people in that region?

GRAHAM: I’m saying it’s inevitable unless North Korea changes, because you’re making our president pick between regional stability and homeland security. He’s having to make a choice that no president has wanted to make. They’ve kicked the can down the road for 20 years; there’s nowhere else to kick it. There will be a war with North Korea over their missile program if they continue trying to hit America with an ICBM. He’s told me that, and I believe him.

Now, we don’t know if Graham is accurately conveying what the president said or merely putting words in his mouth. A senior White House official, when asked about Graham’s comments, told me that “all options remain on the table” — but also noted that the administration’s policy right now was to apply “maximum diplomatic and economic pressure to convince North Korea to change course.”

But it’s also possible that Graham is simply telling the truth: that both he and the president are willing to risk a catastrophic war that could threaten the lives of millions of North Koreans, South Koreans, and Japanese — not to mention the 28,500 US troops stationed in South Korea — to head off an as-yet-theoretical threat to the United States.

“This is madness,” Kingston Reif, the director for disarmament and threat reduction policy at the Arms Control Association, tweeted after seeing Graham’s comments. “Unhinged madness.”

THE COSTS OF A KOREAN WAR ARE NEARLY INCONCEIVABLE

It is not yet clear that North Korea’s missile program is a direct threat to the US homeland. The missiles theoretically have enough range to go as far as the Eastern Seaboard, but it’s not clear if North Korea has the technology to attach a nuclear warhead to these missiles. It’s also not clear how accurate its missiles are.

What’s more, virtually every expert on North Korea agrees that Kim Jong Un is rational: that he wants nuclear weapons not to wipe out an American city, which would clearly lead to retaliation that would decimate the country, but to protect the North from foreign invasion or regime change. There’s still a risk of a nuclear strike in a tense situation — a Korean equivalent to the Cuban Missile Crisis that goes wrong — but on the whole, there’s no reason to think that North Korea is significantly harder to deter than the Soviet Union was.

So the threat posed by North Korea’s ICBM program, while not insignificant, is not fully established. But we what do know is that war with North Korea today would probably kill hundreds of thousands — if not millions.

The North Koreans are not stupid: They know they’re militarily outclassed by the United States and South Korea. So their strategy in the event of an out-and-out war, as far as outside analysts can tell, is to inflict overwhelming pain as quickly as possible: to bombard South Korea, US allies in Japan, and any American forces they can find with missiles and artillery to the point where their stronger enemies lose their appetite for a protracted conflict.

The estimates of a conflict involving the North’s nonnuclear arsenal alone are hard to fathom. My colleague Alex Ward spells some out:

South Korea’s capital city, Seoul, is a so-called “megacity” with a whopping 25.6 million residents living in the greater metropolitan area. It also happens to be within direct firing range of thousands of pieces of North Korean artillery already lined up along the border, also known as the demilitarized zone. Around 70 percent of North Korea’s ground forces are within 90 miles of the DMZ, presumably ready to move south at a moment’s notice.

Simulations of a large-scale artillery fight between the North and South produce pretty bleak results. One war game convened by the Atlantic back in 2005 predicted that a North Korean attack would kill 100,000 people in Seoul in the first few days alone. Others put the estimate even higher. A war game mentioned by the National Interest predicted Seoul could “be hit by over half-a-million shells in under an hour.”

Here’s an even grimmer statistic: A South Korean simulation conducted in 2004, before the North had developed nuclear weapons, estimated that there could be up to 2 million casualties in the first 24 hours of a conflict.

Obviously, the death toll would be exponentially higher if North Korea used any of its nuclear weapons. Those could potentially destroy Tokyo (population 9.3 million), Seoul (population 10 million), or other cities in the two countries.

It’s not clear how many working nuclear weapons the North has, though estimates suggest around 10 to 16. We do know that its missiles have enough range to reach Tokyo, and that the country has tested a nuclear weapon designed to fit on precisely such a missile.

Best expert guesses suggest the North would try to nuke US forces in the region if attacked, in order to try to limit America’s ability to help South Korea in ground combat on the Korean Peninsula. But Pyongyang could also target population centers as well — despite the likelihood that any such attack would invite nuclear retaliation from the United States, which has mutual defense agreements with both Japan and South Korea.

“Its rhetoric and accelerated pace of missile testing suggests that North Korea would be the first to use nuclear weapons if it believed itself to be under attack,” Mark Fitzpatrick, the executive director of the International Institute for Strategic Studies America think tank, writes. “Its nuclear posture incorporates the ‘use them or lose them’ principle.”

In short? What Graham and, allegedly, Trump are talking about is far beyond even the horror of the Iraq War. They are loosely talking about risking hundreds of thousands, quite possibly millions, of lives to head off a threat that is, as of right now, still hypothetical.

Graham justifies his attitude, and allegedly the president’s, by reference to patriotism.

It’s troubling enough that a senator thinks this. If the president, who has the ability to actually start a war with North Korea, agrees, we should all be concerned.