Richard Dawkins university event cancelled after his criticism of Islam

We all know that Dawkins is against ALL religion.

I’m not a follower of Milo nor any sort of fan of Dawkins’ views BUT I would go to the end of the earth to defend his right to express them.

Not so for the liberal fascists! 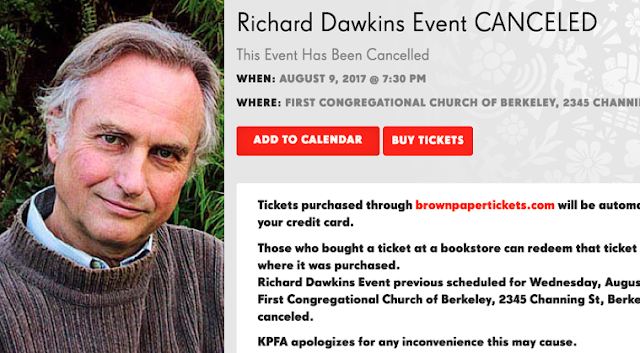 An event in Berkeley featuring Richard Dawkins has reportedly been canceled after organizers learned about his critical view of Islam.

According to Berkeleyside, the event in question was organized by progressive radio station KPFA.

Dawkins, a notorious atheist and harshly outspoken critic of all religions, was to appear on-stage and talk about his latest book ‘Science in the Soul: Collected Writings of a Passionate Rationalist.’

Berkeleyside reports that KPFA sang praises for Dawkins and the book – until a number of his anti-Islam tweets came to their attention.

Subsequently, the outlet states, the station sent an email to all ticket buyers that read, “we had booked this event based entirely on his excellent new book on science when we didn’t know he had offended and hurt – in his tweets and other comments on Islam, so many people.”

“KPFA does not endorse hurtful speech. While KPFA emphatically supports serious free speech, we do not support abusive speech. We apologize for not having had broader knowledge of Dawkins views much earlier.”

Putting the sheer insanity of the suggestion that one could know who Richard Dawkins is and not be aware of his hatred for Islam, it’s of course interesting that KPFA took offence with the author’s critique of Islam specifically.

Dawkins addressed that point in a statement.

“I am known as a frequent critic of Christianity and have never been de-platformed for that,” the statement reads. “Why do you give Islam a free pass? Why is it fine to criticize Christianity but not Islam?”

Listen to some of Richard Dawkins’ statements on Christianity below.

Dawkins’ statement goes on to call into question the notion that he has spoken about Islam in an “abusive” manner.

“You say I use ‘abusive speech’ about Islam,” it reads. “I would seriously – I mean it – like to hear what examples of my ‘abusive speech’ you had in mind. When you fail to discover any, I presume you will issue a public apology.”

While no one involved in the matter has mentioned exactly what tweets provoked KPFA, Berkeleyside reports, “a perusal of Dawkins’ recent tweets shows that he comments often about Islam, but he also comments about other religions.”

“Dawkins has sent out tweets and made statements that are critical of extremist Muslims, the female genital mutilation practiced by some Muslim societies, and the requirement that women must wear burkas.”