Rain bomb in Washington DC: 3 Inches of Rain in 45 Minutes

Robertscribbler,
28 July, 2017
Climate change related hydrological events. Rain bombs. These are somewhat uncomfortable subjects. But it’s a basic fact that if you warm the Earth, you also crank up rates of evaporation and precipitation. And since we’ve warmed the Earth by about 1.2 C above preindustrial levels by burning fossil fuels and dumping so much carbon into the atmosphere, we’ve loaded the climate dice for producing both more extreme rainfall and more extreme drought events. 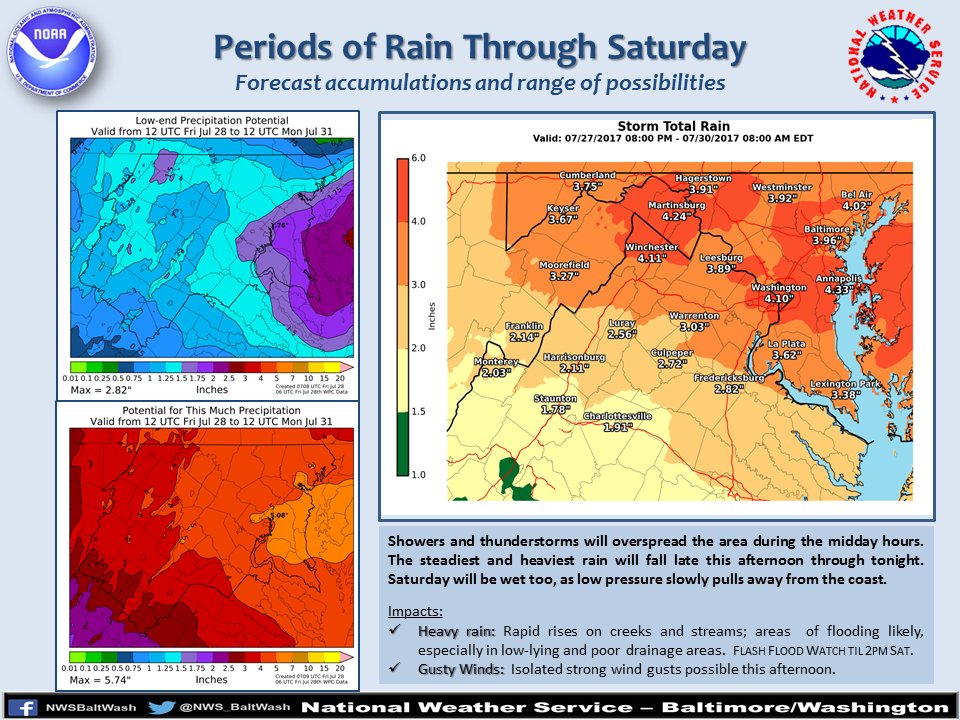 In the mid-Atlantic today, a strange summer Nor’easter is dropping multiple inches of rain over parts of Maryland, Virginia and Delaware in very short time periods. In an area just northwest of Silver Spring, M.D.,  an amazing 3.19 inches of rain fell in just 45 minutes.

A resident of Gaithersburg, M.D., I experienced a comparable deluge situation in which my hilltop residence and home office saw a river forming in its back yard. Just about an hour before, my phone was sending me warnings to avoid the valley regions. Considering the flooding we saw in the hills, it’s tough to imagine what the low-lands might have looked like.

(Extreme rainfall creates streams through the hilltop residences of Gaithersburg, MD on July 28 as a strange summer Nor’Easter taps very high atmospheric moisture levels over the region to produce 1-4 inch per hour rainfall rates.)
It’s worth noting that 1 inch per hour rainfall rates are considered to be extreme. But the short-period volumes of rain being produced by this system (1-4 inch per hour rates) are pretty much off the charts. It’s coming from a storm that has been fueled by an upper level trough dipping down over Canada. One that pushed a large frontal system over the Great Lakes region on Wednesday night. This front then moved across the Ohio Valley on Thursday and out over the Atlantic by Friday. Packed with cooler temperatures, the front ran over ocean waters that are ranging between 1 to 4 degrees Celsius above average. The extra ocean heat helped to create a very moisture-rich environment. A coastal low subsequently forming in this very wet column of air began cranking that moisture over the mid-Atlantic even as its associated instability produced some extraordinarily powerful rainstorms.

(Sea surface temperature anomaly map shows a hot blob of ocean water temperatures off the U.S. East Coast in the range of 1-4 C above average. A deep-digging trough has enabled a strong coastal low to form and feed on the amazing amount of moisture bleeding off this warm water to produce an odd summer nor’easter and related extreme rainfall over the U.S. East Coast. A number of the factors enabling the strength of this system are aspects of human-forced climate change. Notably — the deep summer trough and the very warm Atlantic Ocean surface waters. Image source: Earth Nullschool.)

Meanwhile, the Gulf of Mexico’s warmer than normal waters have throughout the spring and summer produced tropical levels of moisture over southern and central sections of the Eastern U.S. — fueling numerous extreme rainfall events and adding even more punch to this particular event.
Already warm summer waters produce a serious amount of water vapor. But punch up ocean temperatures to the above average ranges we see today and you get even more moisture bleeding out. If an odd, deep, cool summer trough runs through it, then it provides a big kick of atmospheric instability in a region where there’s already an abnormal amount of fuel for storms. Both the ability of troughs to dig deeper over the U.S. East Coast and the added ocean heat and moisture are arguably aspects related to human-caused climate change. So to talk about this particular event without adding that context would not really be looking at the whole weather and climate picture.