Numbers of Adele penguins in Antarctica are down by 80%

Watching the following vdeo makes me immeasurably sad but also incrediby angry at the likes of kathryn Ryan and her like at Radio NZ who perpetuate lies about climate change. 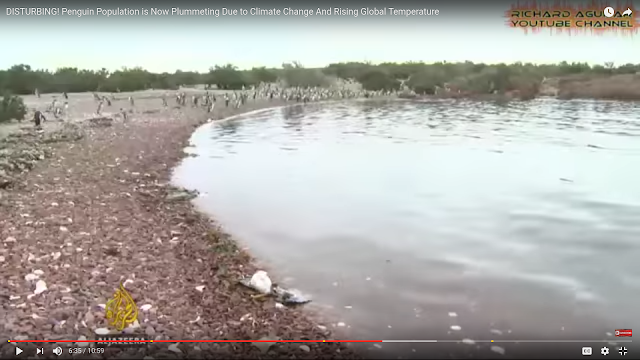 And the greening Antarctic peninsula in 2017 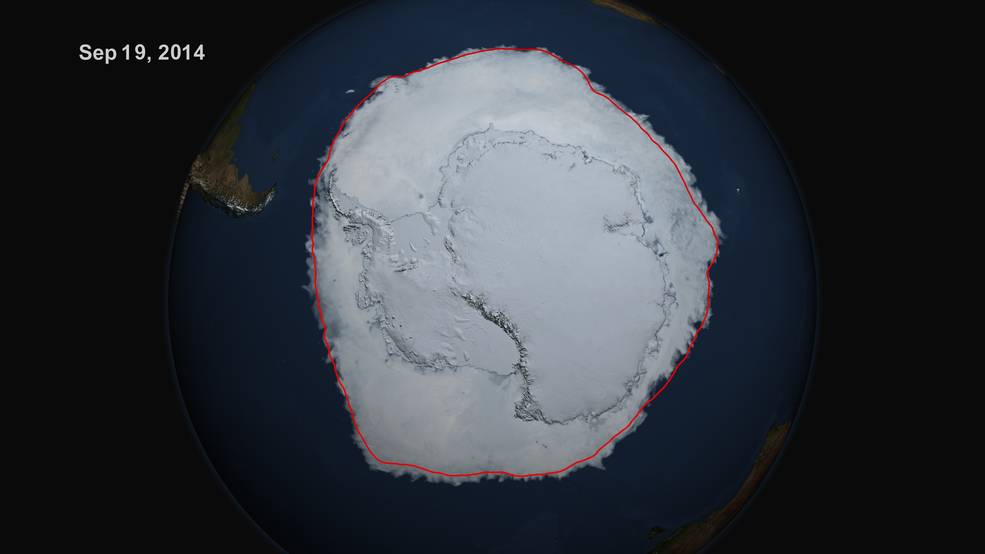 On Sept. 19, 2014, the five-day average of Antarctic sea ice extent exceeded 20 million square kilometers for the first time since 1979, according to the National Snow and Ice Data Center. The red line shows the average maximum extent from 1979-2014.
Credits: NASA's Scientific Visualization Studio/Cindy Starr

Antarctic sea ice drops by 10 per cent, wiping out highs set in 2014

Here is the item from Radio NZ


To listen to podcast GO HERE

These are some of the items that seem to have eluded Professor Pat Langhorne and Kathryn Ryan of Radio New Zealand who I have learned are the biggest ABRUPT climate change deniers anywhere.

Watch the video below to see  to see how Arctic sea ice is not melting - lol.


Animation showing the decline of the sea ice around Antarctica over the period from November 16, 2016, to January 4, 2017. For comparison, the blue line shows the 1979-2000 average. Click on image to view animated version.

Added to the post 'Sea ice is shrinking', at: http://arctic-news.blogspot.com/…/11/sea-ice-is-shrinking.h…

Robertscribbler,
2 February, 2017
Throughout the record global heat of 2016 and on into 2017, the world’s sea ice has taken a merciless pounding.
In the Northern Hemisphere, extreme warming of the polar region pushed Arctic sea ice extents to record low daily ranges throughout the winter, spring and fall of 2016. And even today, after many months of daily record lows, sea ice in the Arctic remains more reduced (in most measures) than it has ever been for this time of year.

On the other side of the world, the story is much the same. For it now appears that the ocean region around Antarctica is about to experience an all-time record annual low for sea ice:

(JAXA Antarctic sea ice measure for all years since 1978 shows a strong challenge to the previous record low for extent set in 1997 [lower left hand corner of the graph]. With 2-4 weeks left in the melt season, the present measure is just about 170,000 square kilometers above the 1997 record low during Southern Hemisphere summer.)

Anomalous warmth, though less intense than in the Arctic zone, did finally begin to invade the austral polar region during Southern Hemisphere spring and summer (2016-2017). And since mid October, sea ice surrounding Antarctica has remained in record low daily ranges (see lower red line on the graph above). Wednesday, February 1st’s, JAXA measure of 2.42 million square kilometers of sea ice extent remaining is now just about 170,000 square kilometers above the previous record low sea ice extent set during mid-to-late February of 1997.
During this time of year, average drops in sea ice extent are around 50,000 square kilometers per day. So if all things were equal, we’d expect melt inertia to push the measure into new record low ranges over the next 3-5 days. Unfortunately, there appears to be an added impetus for melting as another blast of above average temperatures is being drawn into Antarctica underneath strong ridging features in the Southern Hemisphere Jet stream.

(Warmth building into Antarctica over the next two weeks may be the final straw that tips the near ocean region into new all-time record lows for sea ice extent. The above GFS model prediction for February 9th rendered by Climate Reanalyzer shows temperature anomalies predicted for Antarctica and the surrounding regions. Red to orange is warmer than average, blue to purple is colder than average.)

As a result, over the next week, temperatures around Antarctica and in the nearby region of the Southern Ocean are expected to average between 1.2 and 1.8 C above the already warmer than normal 1979 through 2000 average. Meanwhile, parts of West Antarctica’s coastal zone are expected to hit as high as 5-20 C above that average.
With more warmth on the way, with measures already striking nearly half a million square kilometers below previous daily record lows, and with at least two weeks remaining in the melt season, it appears likely that we are in for a new all-time record low for sea ice extent in the ocean region surrounding Antarctica. If the new record does occur, it will happen during a time when the Arctic is also experiencing daily record lows for sea ice during Northern Hemisphere winter and as the world is experiencing global temperatures in the range of 1 to 1.2 degrees Celsius above 1880s averages.
Links:
JAXA Sea Ice
Arctic Sea Ice Graphs
Climate Reanalyzer

“When I used to come to Antarctica in the 1990s, it never used to rain,” said Rodolfo Sanchez, director of the Argentine Antarctic Institute (IAA).

“Now it rains regularly—instead of snowing,” he told AFP during an Argentine government visit to King George Island, off the tip of the western Antarctic peninsula.

Scientists monitoring conditions at the base say the average temperature here has increased by 2.5 degrees Celsius (4.5 degrees Fahrenheit) over the past century.

Dark scars of rock are showing through what were once spotless sheets of white snow on the glaciers’ flanks.

“Antarctica is a thermometer that shows how the world is changing,” said Adriana Gulisano, a physicist at Argentina’s National Antarctic Directorate.

“There is no place where climate change is more in evidence.”

Local wildlife also appears to reflect to the change.

Scientists at the Carlini base say a pair of yellow-throated King penguins have swum up to mate nearby for the past three years.

Although the theory is not confirmed, they suspect another sign of climate change. The species had previously been thought to be restricted to warmer spots on the Falkland Islands and the Argentine mainland.

Technician Luis Souza, 56, has divided his time since 1979 between Buenos Aires and the Carlini base, where he has studied migrating birds: cormorants, gulls and penguins.

More crucially, scientists say melting ice is disrupting the breeding of krill, a shrimp-like creature that serves as food for numerous species.

Since it never rains in Antarctica, does that mean it is technically adesert?

It scientifically is a desert.

Nestled around the South Pole, where the coldest temperature on Earth was recorded and which doesn't receive sunlight for months every year, it's sometimes hard to think of icy Antarctica as a desert. But it is the world's largest one because very little precipitation falls there — on average, it gets less than 2 inches (50 millimeters) a year, mostly as snow.

Despite the low snowfall, vast glaciers cover 99 percent of Antarctica's surface. That's because the average temperature (minus 54 degrees Fahrenheit, or minus 48 degrees Celsius) slows down evaporation to a crawl. Over long periods of time, the snowfall accumulates at a rate faster than Antarctica's ablation, according to "Discovering Antarctica," a project of the U.K.'s Royal Geographical Society.


Parts of Antarctica are showing strong signs of warming up along with global climate change, however. Temperatures in the Antarctic Peninsula have increased by 4.5 degrees Fahrenheit (2.5 degrees Celsius) over the past 50 years — five times the rate of the rest of the planet. And scientists think that warm ocean waters could be melting Antarctica's glaciers as they flow under the floating tongues of ice.

Posted by seemorerocks at 21:16