Climate sensitivity larger "than previously thought" (by the computer modellers)

I can now understand it now why our retired professor from Victoria University did not like it at all when I mentioned Keith Trenberth.

He is quoted in this article as being critical of the computer models as being too conservative.

The modellers don't like that. They hate Prof. Peter Wadhams. 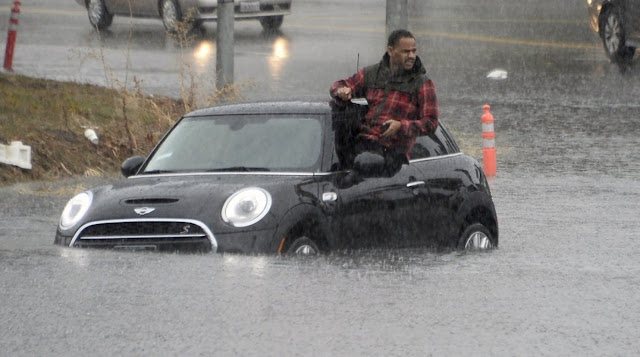 Even if we meet our most ambitious climate goal — keeping global temperatures within a strict 1.5 degrees Celsius (or 2.7 degree Fahrenheit) of their preindustrial levels — there will still be consequences, scientists say. And they’ll last for years after we stop emitting carbon dioxide into the atmosphere.

New research suggests that extreme El Niño events — which can cause intense rainfall, flooding and other severe weather events in certain parts of the world — will occur more and more often as long as humans continue producing greenhouse gas emissions. And even if we’re able to stabilize the global climate at the 1.5-degree threshold, the study concludes, these events will continue to increase in frequency for up to another 100 years afterward. The findings were published Monday in the journal Nature Climate Change.

“It was really a surprise that what we find is after we reach 1.5 degrees Celsius and stabilize world temperatures, the frequency of extreme El Niño continued to increase for another century,” said Wenju Cai, a chief research scientist at Australia’s Commonwealth Scientific and Industrial Research Organization and one of the study’s lead authors. “We were expecting that the risk would stabilize.”

The study builds on a 2014 paper, also published in Nature Climate Change by Cai and a group of colleagues, which first suggested that extreme El Niño events will increase with global warming. That paper focused on a business-as-usual climate trajectory, in which greenhouse gas emissions remain at high levels into the future, Cai noted. It found that under this scenario, the frequency of extreme El Niño events would double from their preindustrial levels within this century.

The 2014 paper produced mixed responses among scientists at the time. Some experts, including Kevin Trenberth of the National Center for Atmospheric Research, suggested the models they used may not accurately simulate the behavior of El Niño.

Nevertheless, after the Paris climate agreement was finalized, and the 1.5-degree temperature goal was established, the researchers were interested in revisiting their previous work. This time, they specifically investigated the way El Niño would be affected if the world actually managed to stay within this climate threshold, a target that many scientists believe is already close to slipping through our fingers. Recent research has suggested that we’re on track to overshoot this climate goal within the next few decades.

During a typical El Niño event, Cai said, parts of the central and eastern tropical Pacific Ocean become warmer than usual, causing changes in wind patterns and rainfall in certain places around the world. Often, the consequences include warming over the western Americas and increased rainfall in the tropical Pacific. During an “extreme” El Niño event, these warming patterns tend to be shifted even further toward the east and the equator, forming a zone near the coast of Ecuador where intense amounts of heat transfer between the ocean and the atmosphere. The results tend to include even more intense rainfall in the region than usual, sometimes up to 10 times the typical amount, Cai said.

The researchers used a collection of 13 climate models to simulate a scenario in which global carbon dioxide emissions peak around the year 2040 and then decline, a trajectory that would keep the world within the 1.5-degree threshold. They then took note of how frequently these extreme events occurred in the simulations.

The models suggested that by the time we hit the 1.5-degree mark, the frequency of extreme El Niño will have doubled from its preindustrial level of about five events every 100 years to about 10. This increase will occur steadily over time, the researchers note, meaning that any additional increase in carbon dioxide in the future will lead to an increased risk of an extreme event.

This effect does increase slightly under stronger climate scenarios — the researchers report that under a 2-degree climate threshold, the increase in frequency is a bit stronger. But overall, each scenario produces approximately double the preindustrial frequency during this century, even if the effect is a bit larger under more severe trajectories. This is in keeping with the 2014 research, which suggests that under a business-as-usual climate scenario, the frequency of extreme El Niño events will also approximately double before the end of the century.

But the consequences won’t stop when we reach 1.5 degrees. The study suggests that the frequency of extreme El Niño events will continue to increase (although at a slower rate) even after global temperatures stabilize, potentially for up to another 100 years. These findings are less firm, since not all the models are capable of projecting beyond the end of the century. But several of them indicate that by the year 2150, the frequency will have grown to about 14 events per 100 years.

The researchers noted that the same results did not hold true for La Niña events, which often produce the opposite effects of El Niño. While previous research has suggested that more intense warming scenarios may lead to more frequent La Niña events as well, the milder climate trajectory in this study did not produce any significant changes.

Trenberth, who was not involved with the research, still has concerns about the models used in the research, which he says are “the same flawed models used before.” He argues that the models do a poor job of capturing some of the impacts of El Niño events — even “regular” ones — and the way they’re influenced by temperature and moisture in the atmosphere.

But Cai says he believes the study’s results are “believable” and that there are mechanisms to explain them. Because of the influence of climate change, the eastern equatorial Pacific is warming quickly, he said. As a result, it’s becoming easier for the critical centers of convection, or heat exchange, which affect global weather patterns, to move from west to east across the Pacific as they do during El Niño events.

The timing of El Niño events in the future will depend on factors including natural climate variations and weather patterns. Scientists are still working on figuring out better ways to predict El Niño before it hits, but for the time being, it’s often difficult to see it coming too far in advance. But over the course of a century, the study suggests we’ll see more of them as the climate continues to warm — and even after it stabilizes — even if we don’t know exactly when they’ll be coming.

And Cai noted that the findings also beg the question of what other types of climate effects might continue to evolve long after we stop emitting carbon dioxide into the atmosphere, whenever that may be. If El Niño is so severely affected, even at a 1.5-degree threshold, fluctuating temperature patterns in the Indian and Atlantic oceans may also be at risk of long-term changes under global warming, Cai suggested.

“Those are the questions scientists need to ask,” he said.
Posted by seemorerocks at 16:48