Mainstream Media Journalists Are Eager for World War 3 on MSNBC 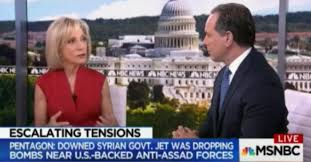 (FAIR) — If we’re heading toward World War III, let’s hope that some episodes of MSNBC‘s Andrea Mitchell Reports survive the nuclear winter to provide future civilizations with some clues as to how we got there.

Mitchell’s June 19 show was a typical example of the current mentality of the US security state. A short segment in the show featured Jeremy Bash, currently a military consultant and formerly the chief of staff for both the Department of Defense and the CIA under Leon Panetta in the Obama administration.
.
In just over four-and-a-half minutes, Bash recited an alarming number of pro-war propaganda talking points that went unchallenged (and were even egged on) by Mitchell.

Bash and Mitchell began their conversation by addressing Monday’s escalation of the Syrian War, when US forces shot down a Syrian government warplane. Mitchell wondered if taking the action was “basically getting us into a conflict with Russia,” while Bash blamed the whole thing on the Russians refusing to tell Assad to stand down.

Presenting military conflict in a way that shows the US to be the hard-luck victim of good intentions is of course not unique to MSNBC, or even cable news. As FAIR’s Adam Johnson pointed out on Twitteron Tuesday afternoon, the US shooting down an Iranian drone in southern Syria was blamed on the unmanned robot’s apparent display of “hostile intent”— reasoning that was then uncritically repeatedin the headline of British newspaper the Independent.

Mitchell asked Bash if the dispute could result in all-out war. From there, the conversation devolved into Bash and Mitchell doing everything short of calling for war between the US and Russia, countries with stockpiles of around 7,000 nuclear weapons each.

The US hasn’t done “a very good job pushing Russia out of the way,” said Bash, implying it would be a good idea to target a country that only months ago was reported by Newsweek to have a bomb that could flatten Texas. Bash added that “we’ve let Russia have too free a hand, in my view, in the skies over Syria.”

That the US should have full control over the skies in Syria is not a position unique to Bash. BothDonald Trump and Hillary Clinton expressed support for no-fly-zones over the country during the presidential campaign. But to hear it stated so openly in the context of “pushing” a major nuclear power “out of the way” is still startling.

Mitchell replied that “the criticism is that the president is reluctant to go after Russia.” Of course, that’s largely in line with the marching orders from her colleagues at MSNBC, who see Russian conspiracies and machinations everywhere, presenting the imperial rival as an existential threat.

Bash agreed, telling Mitchell that “the big issue here has been an inexplicable lack of resolve regarding Russia,” lamenting that  “we have not been willing to take them on.”

It wasn’t all Russia and Syria; other Mideast conflicts were topics of discussion as well during the segment. Mitchell and Bash placed resolving the Israeli/Palestinian “way down the list” of things for US diplomacy to do in the region, far below the dispute between Saudi Arabia and Qatar, and the latter’s perceived closeness to Iran.

Solving that crisis, Bash said, was a top priority, tying all the continuing conflicts in the Middle East together in one neat package—with Russia in the middle, naturally.

“If you look at the regional dynamics,” said Bash, “Russia has been providing cover for Syria, for the Assad regime and for their friends in Iran, and that is a dangerous development.”

“Jeremy Bash,” Mitchell said as the show cut to commercial. “Not a reassuring Monday message.”

“A lot to worry about,” Bash agreed.

A lot to worry about indeed, if Bash and Mitchell are indicative of corporate media’s enthusiasm for going to war with another nuclear-armed nation