The week's news from Luke Rudkowski 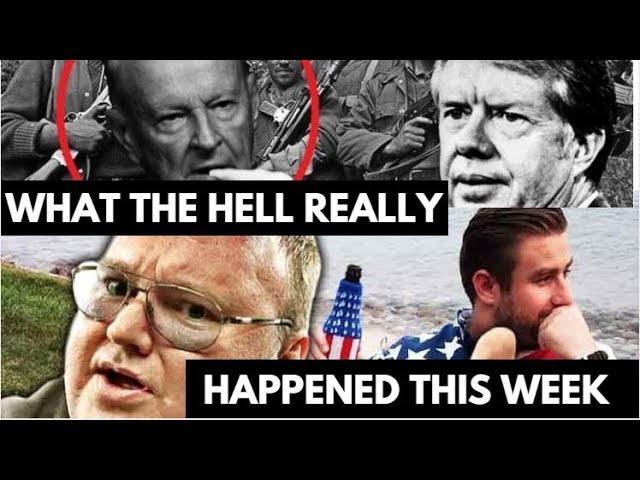 In this video, Luke Rudkowski brings us another insightful weekly news wrap up.

One of the biggest stories this week is the death of the first person Luke ever confronted- Zbiginew Brezinski. The U.S. mainstream media remembered him as mainly the national security advisor for former President Jimmy Carter.


They neglected to mention that he was a very influential globalist- A co-founder with Henry Kissinger of the Trilateral Commission, and a member of the CFR and Bilderberg groups.

Tune into our Youtube channel this week for live coverage of Bilderberg 2017!

They also didn’t mention that he is the main man responsible for the rise of Al Quaeda, pioneering the U.S. government’s practice of sponsoring radical Islamic terrorists in 1979.

With terrorist attacks becoming more frequent in the west, we have to ask ourselves why is this happening? Unlike much of the alternative media out there, I don’t believe it’s all Muslims. The inspiration for these attacks comes from Wahhabism- a fanatical and exclusive creed of intolerant regressive Islamists.

Wahhabism in mainly dominant in Saudi Arabia. They believe that Shia Muslims are their enemies, and that women shouldn’t have rights. These groups which were armed and financed by Brzezinski were also financed by Obama, and now by Trump.
Trump just handed Saudi Arabia- the s a $460 billion dollar arms deal with the main Wahhabist country which is enabling U.S. weapons to be used in war crimes.

Trump claimed Saudi Arabia masterminded 9-11 and now he is further establishing them as the U.S’ main hegemonic power in the middle east, and mainly going against the Shias in Iran.

Salman Abedi– the Manchester suicide bomber was associated with terrorist organizations, and flew an ISIS flag outside of his window while traveling in Libya and Syria. As a citizen of Britain, he is subjected to constant surveillance, so how did the government miss the terrorist flag waving in their faces?

These terrorist attacks are used as examples to terrify people into accepting more surveillance, so why isn’t the surveillance increase stopping them? Mass data collection is one factor.. instead of doing targeted surveillance as they collect information on every citizen. So while the NSA is admittedly looking at your sexts, the bad guys get lost in the mess.

The mass-collection mess is an example of the slave and master mentality between governments and their people- where the owners don’t trust their property and keep them under constant watch.

When you look at the big picture, you can see the British and American government’s fingerprints on the Jihadi attacks that even the former leader of Libya- Muammar Gaddafi warned us about in 2011. He said if the US & UK governments overthrew him, it would lead to an open door for Jihadis and the slave trade route between Libya and the coast of Italy.

Things are getting worse, as this has been the deadliest month for US-led strikes on Syria. This is, of course creating more terrorists, as people seek vengence for their innocent loved ones who were murdered.

The UK’s intelligence agency says that there are over 23,000 Jihadi’s in Britain, with at least 3,000 posing an imminent threat. It makes you wonder how many of them were financed by the US & UK governments to fight in Libya and Syria for regime change?

Jihadi terrorism isn’t just in the west.. Muslims are not all Wahhabists and the Middle East is also suffering.. Recently in Syria, Wahabist rebel forces who have been financed by the west, murdered more than 80 Syrian children.
And now because of disastrous foreign policy decisions we are all living in this fear-based, order-out-of-chaos reality.

We need to deal with the root of the problem.. The US and UK continue to create a neverending cycle of terrorism by financing, arming, strengthening and emboldening the same forces that they claim to be enemies with, while humanity is being divided by religion, and plurocratic kakistocracy looks down on us, laughing.

In other world news, the US weapons deployed a 3rd aircraft carrier towards North Korea, and an ‘unsafe’ interception by the Chinese of a US surveillance

Also, an ‘unsafe’ interception by the Chinese of a US surveillance plane. The US and China can’t seem to agree on what to do about North Korea, and it’s likely that this problem is getting worse.

There is more crazy news coming out about the death of Seth Rich- the DNC staffer who is thought by many to be the Wikileaks source for the DNC email leaks, and was mysteriously murdered on the streets of Washington DC.

A GOP lawmaker is calling for a federal investigation of Rich’s death. Martin Shkreli is offering $100,000 for information leading to the arrest of Seth’s murderer. And Kim Dotcom claims to have evidence that Rich was Wikileaks source, and then confused many when he said he would only release the information if the US gives him diplomatic immunity to enter the US and provide the evidence to Congress. This is very unlikely as Kim himself likely knows. The U.S. government doesn’t seem interested in investigating Seth’s death.

Sean Hannity tried to cover Rich’s death and many people are angry and demanding that he is fired. The authenticity of newly leaked FBI documents is being questioned, FOIA documents are being denied.

The authenticity of newly leaked FBI documents is being questioned, FOIA documents are being denied.

Why is the establishment so afraid to investigate what happened to Seth? If it comes out that Seth is the Wikileaks source, it would totally destroy the mainstream media’s heavily invested in the conspiracy theory that Russia hacked the 2016 election.


The mainstream media is mainly a consolidation of 6 giant corporate conglomerates, which is why anyone talking about important issues like the U.S. being the largest financier in the world of Islamic terrorism- is being branded a ‘conspiracy theorist’.
Posted by seemorerocks at 12:41