Paul Joseph Watson delivers his case in usual, simplistic and inflammatory style but cites enough evidence to confirm that western NGO’s and people’s smugglers are in cahoots. 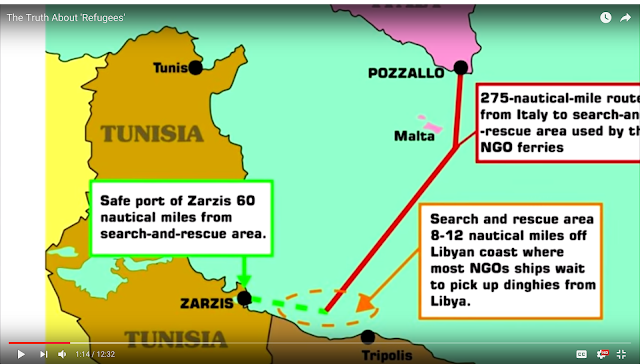 Are we helping desperate migrants — or just people smugglers?

Shocking claims in Italy about collusion between people smugglers and NGOs

What is happening in the 300-mile stretch of sea between Sicily and Libya, day in and day out — in other words, what ‘we’ are doing there — is beyond reasonable doubt insane.

A sane person would assume that the 181,436 migrants (a new record) who made it by sea to Italy last year had done so under their own steam in flimsy fishing boats and dinghies at least some of the way across the Mediterranean. This, after all, is the message aid agencies and governments put out.

In fact, every one of those 181,436 was picked up by EU and non-government aid-agency vessels off the Libyan coast just outside the 12-mile territorial limit, then ferried across to Europe. The people-smuggler boats — more often than not these days dangerously unseaworthy rubber dinghies — chug out towards the 12-mile limit, send out a distress signal, and Bob’s your uncle.

Nearly all the migrants arriving in Italy are young men from West Africa, not refugees. They have the cash for a ticket on a smuggler boat (€1,500, give or take) so are not destitute. That’s getting on for £300 million in ticket sales last year. West African migrants are big business.

The justification for the presence of the EU and aid-agency fleets in the southern Mediterranean is to save lives, and in the case of the EU’s Operation Sophia to arrest people smugglers and destroy their boats. If the fleets did not patrol, there would be far fewer deaths, because far fewer migrants would dare to put to sea. There would be far fewer people smugglers. Yet thanks to this enormous rescue fleet, the Italian interior ministry expects 250,000 more migrant boat people.

The madness does not end here. There’s reason to suspect that the people smugglers are actually in direct contact with aid agencies, which is why they are so often first on the scene to rescue migrant boats — and this is a criminal offence.

Last week, the chief prosecutor in Catania, Carmelo Zuccaro, revealed details of an investigation he has just begun amid growing suspicions of collusion between the agencies and the people smugglers. Where is the line, he asked, between aid and facilitation?

He told Italian MPs: ‘The NGOs often work near to the coast and territory of Libya. We have calculated that in the last four months of 2016, 30 per cent of the rescues which landed at Catania were carried out by these organisations. In the first months of 2017, that percentage has grown to at least 50 per cent.’

This Sicilian judge said the country with the most aid agencies operating in the central Mediterranean was Germany, with five organisations and six vessels (one costing £350,000 per month to keep at sea — over £4 million a year).

‘We must solve the problem of where the money comes from to sustain such high costs — who are the sources of this finance? We shall be doing checks on the NGOs who bring migrants into our jurisdiction. It is notable that the NGO ships are nearly always the nearest to the location of the emergency.

‘It’s not a crime to invade the waters of a foreign country to pick them up. What is punishable is bringing them to Italy without respecting the rules of engagement… vessels should take migrants to the nearest port, which is certainly not Italy.’ The nearest safe port, in fact, would be in Tunisia.

Its annual report says the smugglers now hardly bother to telephone the Maritime Rescue Coordination Centre in Rome to be picked up, preferring to call aid-agency vessels directly. The reason is obvious: these people will not arrest them or confiscate their vessels.

Since June 2016, many boats have been rescued near the Libyan coast by aid-agency vessels ‘without any prior distress call’, suggesting the rendezvous has been pre-arranged. In Italy, the lynch-mob principle of ‘he must have done it’ is enough to secure convictions, so prosecutions are a distinct possibility.

But the only way to solve the migrant crisis — as the Frontex report says — is to stop all these West Africans getting to Libya. This would ensure too that the aid-agency humanitarians are not led into further temptation.

Carmelo Zuccaro, the chief prosecutor of the Sicilian port city of Catania, did not say he would open a criminal investigation, and he gave no details about the evidence.

"We don't know if we can use this information during a trial," he said.

He was not immediately available for comment on Sunday.

Italy has become the main route for migrants seeking to reach Europe, with 181,000 arrivals last year and some 4,600 estimated deaths at sea. So far this year arrivals are up more than 40 percent on 2016, and as many as 1,000 have died, the International Organization for Migration says.

Zuccaro launched a fact-finding investigation into the work of NGO boats in February, and in March told Italy's parliament he was "convinced" smugglers were in direct contact with rescuers, though at that time he said he had no proof.

NGOs, including Save the Children, Proactiva Open Arms and SOS Mediterranee, have rejected the accusations, saying their only objective is to save lives.

Italy is due to hold a general election before next summer, and most polls show the 5-Star Movement has a narrow lead on the ruling center-left Democratic Party.

EU border agency Frontex has also criticized the NGOs, saying they make it too easy for smugglers.

Humanitarian rescue boats wait just outside of Libyan territorial waters. Migrants are packed by smugglers onto flimsy rubber boats that struggle to make it to international waters before sinking.

"More would die if we weren't there," Chris Catrambone, who co-founded the MOAS NGO to rescue migrants with his wife Regina, told Reuters.

During a visit to Canada on Friday, Prime Minister Paolo Gentiloni cautioned against criminalizing NGOs, saying they "save lives and should be thanked".

An Italian prosecutor has stepped up his investigation into charity-funded migrant rescue boats in the Mediterranean after claims they are acting as a de-facto taxi service for people traffickers.

Vessels chartered by private organizations are in the spotlight amid accusations they not only encourage traffickers to set migrants out to sea by sailing as close to Libyan waters as possible, but also come to the rescue when the smugglers call.

Prosecutors are looking into how the rescue vessels are funded following questions over the amount of money being spent.


Rescuers say they are forced to patrol near Libya to save lives because the migrants are being loaded into overcrowded dinghies that are so flimsy they are destined to sink shortly after departure. 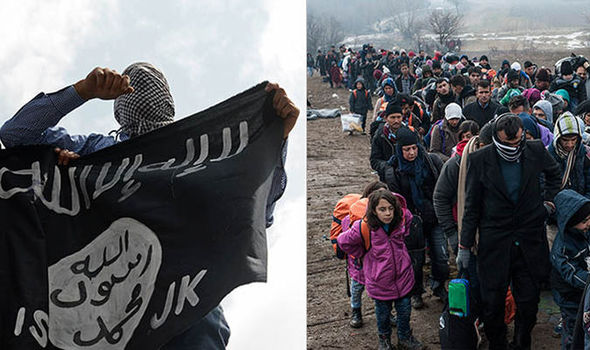 A study by counter-extremism group Quilliam revealed ISIS is exploiting desperate and underage asylum seekers attempting to make the journey across the Mediterranean with the promise of cash and free travel.

The report also says extremists have infiltrated refugee centres and mosques in Germany in a bid to radicalise disillusioned new arrivals already suffering from "a lack of belief in the host country".

The fact that ISIS is even suspected of recruiting refugees on their way to Europe ultimately becomes a self-fulfilling prophecy, Quilliam said, as it increases the burgeoning anti-immigrant sentiment within Europe and reinforces the narrative Daesh uses to recruit refugees.

By analysing refugee policies and mapping the journeys taken by refugees towards Europe, Quilliam has produced the first report pinpointing the moments where young refugees are most vulnerable to recruitment by extremists.

The report said: "While some refugees may have to pay smugglers up to $560 for passage towards the Mediterranean coast, IS, capitalising on this route, offer free passage to those willing to join IS.

"IS is able to provide a degree of security. The financial lure is ever-present on the refugee journey - to those reaching the Mediterranean coast, IS offer potential recruits up to $1,000 to join the organisation.

"IS is clearly aware of the value of these refugee routes for the purposes of recruitment and for exporting their operatives into Europe.

"Aside from potentially facilitating access to Europe for IS fighters, the suspicion created by the mere possibility of this is likely to increase xenophobic and anti-refugee sentiment in Europe, reinforcing the narratives that IS uses to recruit both refugees from Syria, Iraq, and Afghanistan, and from Muslim communities in Europe and the West.

Smugglers and people traffickers were also a threat, the report said, with more than 90 per cent of refugees arriving in the EU using some form of "illegal enterprise" en-route.

This, Quilliam claimed, was "a direct consequence of the fortification of European borders and the small numbers of refugees resettled in the EU directly from refugee camps."

Unaccompanied minors were particularly at risk of recruitment by extremists, as well as sexual exploitation.

The report said so far 10,000 unaccompanied refugee children had disappeared since arriving in Europe, "many of whom are thought to have fallen into the hands of the very same criminal organisations that brought them into the continent".

Quilliam also criticised the treatment of young refugees arriving in the UK.

It urged the Government to "treat children as children first" and not as asylum seekers.

"By treating children as asylum seekers, the UK is not fulfilling its obligation to safeguard and promote the welfare of children in the country," the group concluded.

"This report documents in great detail the complexity of the problem, the scope of the youth refugee crisis, and provides a rigorous analysis of the settings, and potential processes, where refugee youth may be drawn into extremist activities.

"This document serves as a critical resource for those seeking to understand the refugee crisis, and a vital reference for policy makers who must create balanced, effective, and evidence informed policies."

Fewer than 3% of migrants who reached Italy after crossing the Mediterranean in 2016 were deemed refugees, UN report shows

Only 2.65 percent of those migrants who arrived in Italy were granted asylum as genuine refugees, according to the United Nations.

he United Nations refugee agency (UNHCR) said 181,436 migrants arrived in Italy last year, most of them crossing the Mediterranean from north Africa in flimsy boats.

UNHCR said only 4,808 were granted asylum in Italy and 40% of the arrivals were found to be in need of international protection. 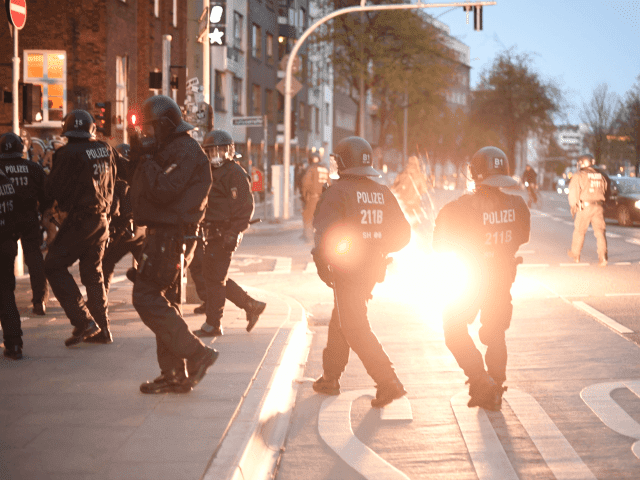 A massive, migrant crime wave is surging across Germany according to figures buried in a new report released by the country’s Interior Ministry. The data reveals that without migrants considered, crime rates in Germany would have remained roughly static since 2014. But, in fact, the country recorded an extra 402,741 crimes committed by migrants.

The European Union’s immigration commissioner says the bloc has the “tools, the means, and the power” to force EU member states to accept Islamic migrants.

Dimitris Avramopoulos, Greece’s commissioner for the EU’s “Common Immigration and Asylum Policy,” made the comments during a visit to Poland, which refuses to accept economic migrants into their country.

“If we don’t have tangible efforts by September… the Commission will not hesitate to make use of its power,” he warned.

Avramopoulos’ comments are the latest of a string of threats made by European officials to countries who challenge the EU’s migrant quotas meant to offset the 160,000 migrants from Italy and Greece by September.
Posted by seemorerocks at 14:46