"The coup d’etat has been successful"

The Republic Has Fallen: The Deep State’s Plot to Take Over America Has Succeeded [SHORT] 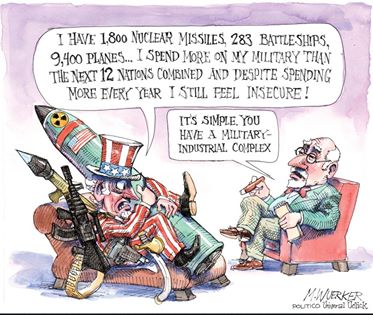 No doubt about it.

The coup d’etat has been successful.
The Deep State—a.k.a. the police state a.k.a. the military industrial complex—has taken over.
The American system of representative government has been overthrown by a profit-driven, militaristic corporate state bent on total control and global domination through the imposition of martial law here at home and by fomenting wars abroad.
When in doubt, follow the money trail.
It always points the way.
Every successive president starting with Franklin D. Roosevelt has been bought—lock, stock and barrel—and made to dance to the tune of the Deep State.
Enter Donald Trump, the candidate who swore to drain the swamp in Washington DC.

Instead of putting an end to the corruption, however, Trump has paved the way for lobbyists, corporations, the military industrial complex, and the Deep State to feast on the carcass of the dying American republic.

Meanwhile, Trump—purportedly in an effort to balance the budget in 10 years—wants to slash government funding for programs for the poor, ranging from health care and food stamps to student loans and disability payments.

The military doesn’t have to worry about tightening its belt, however. No, the military’s budget—with its trillion dollar wars, its $125 billion in administrative waste, and its contractor-driven price gouging that hits the American taxpayer where it hurts the most—will continue to grow, thanks to Trump.

This is how you keep the Deep State in power.
The rich will get richer, the poor will get poorer, the military will get more militaristic, America’s endless wars will get more endless, and the prospect of peace will grow ever dimmer.
As for the terrorists, they will keep on being played for pawns as long as Saudi Arabia remains their breeding ground and America remains the source of their weapons, training and know-how.

Follow the money.  It always points the way.
As Bertram Gross noted in Friendly Fascism: The New Face of Power in America, “evil now wears a friendlier face than ever before in American history.”

Writing in 1980, Gross predicted a future in which he saw:

…a new despotism creeping slowly across America. Faceless oligarchs sit at command posts of a corporate-government complex that has been slowly evolving over many decades. In efforts to enlarge their own powers and privileges, they are willing to have others suffer the intended or unintended consequences of their institutional or personal greed. For Americans, these consequences include chronic inflation, recurring recession, open and hidden unemployment, the poisoning of air, water, soil and bodies, and, more important, the subversion of our constitution. More broadly, consequences include widespread intervention in international politics through economic manipulation, covert action, or military invasion...

We’ve been losing our freedoms so incrementally for so long—sold to us in the name of national security and global peace, maintained by way of martial law disguised as law and order, and enforced by a standing army of militarized police and a political elite determined to maintain their powers at all costs—that it’s hard to pinpoint exactly when it all started going downhill, but we’re certainly on that downward trajectory now, and things are moving fast.
The “government of the people, by the people, for the people” has perished.
It will not be revived or restored without a true revolution of values and a people’s rebellion the likes of which we may not see for a very long time.
America is a profitable business interest for a very select few, and war—wars waged abroad against shadowy enemies and wars waged at home against the American people—has become the Deep State’s primary means of income.
After all, war is big business.
In order to maintain a profit margin, one would either have to find new enemies abroad or focus on fighting a war at home, against the American people, and that’s exactly what we’re dealing with today.
Had the government tried to ram such a state of affairs down our throats suddenly, it might have had a rebellion on its hands. Instead, the American people have been given the boiling frog treatment, immersed in water that slowly is heated up—degree by degree—so that they’ve fail to notice that they’re being trapped and cooked and killed.
“We the people” are in hot water now.
As I make clear in my book Battlefield America: The War on the American People, the Constitution doesn’t stand a chance against a federalized, globalized standing army protected by legislative, judicial and executive branches that are all on the same side, no matter what political views they subscribe to: suffice it to say, they are not on our side or the side of freedom.

From Clinton to Bush, then Obama and now Trump, it’s as if we’ve been caught in a time loop, forced to re-live the same thing over and over again: the same assaults on our freedoms, the same disregard for the rule of law, the same subservience to the Deep State, and the same corrupt, self-serving government that exists only to amass power, enrich its shareholders and ensure its continued domination.
The republic has fallen to fascism with a smile.

Elections will not save us.
Learn the treacherous lessons of 2008 and 2016:  presidential elections have made a mockery of our constitutional system of government, suggesting that our votes can make a difference when, in fact, they merely serve to maintain the status quo.
Don’t delay.
Start now—in your own communities, in your schools, at your city council meetings, in newspaper editorials, at protests—by pushing back against laws that are unjust, police departments that overreach, politicians that don’t listen to their constituents, and a system of government that grows more tyrannical by the day.
If you wait until 2020 to rescue our republic from the clutches of the Deep State, it will be too late.

Join Sibel Edmonds & Spiro LIVE Today At 3pm Pacific as they cover the some of the latest news and developments around the world. Bring your questions! We covered Newsbud, The Syria war, The Erdogan Trump meeting and the status of Turkey-US relations, Gulen, Flynn and much more!