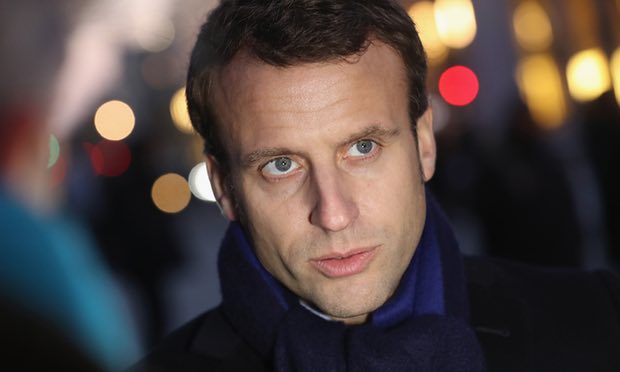 Macron is more Obama than Obama. More Blair than Blair. A creation, groomed and glossed for this “spontaneous” bid for power by the banking class he unashamedly represents.

The Guardian unsurprisingly has numerous pieces (comments-disallowed) pushing this glibly smiling drone as the Saviour of France. Here’s an example to give you a flavour. All predictable and barely worth discussion. But one of the pieces has a little blue sidebar summarising their darling’s policies and position, which so completely encapsulates the destruction of meaning in political language we are currently witnessing that it should be noted. Here is a screen cap:

You see, the Guardian defines itself as a “centrist/liberal Left” outlet, so, of course it supports “liberal Left” polices. How does it do this and still be the paper of record for Wall Street and the neocons? Easy. It just plays Humpty Dumpty and redefines what words actually mean. Here is what “centrist/liberal Left”, as encapsulated by Macron’s policies, now means for the Graun and the class it represents:

1) ”REMAKE THE FAILED & VACUOUS POLITICAL SYSTEM” (translation: maintain the same political system but curtail people’s ability to protest or initiate change)
2) ”RELAX LABOUR LAWS” (translation: cut protection for workers)
3) “CUT BUSINESS TAXES” (translation: make the wealthy wealthier in the name of “stimulating the economy” or some such nonsense words)
4) “REFORM UNEMPLOYMENT SYSTEM” (translation: cut or eradicate protection for those rendered unemployed by the above two policies)
5) “ENCOURAGE SOCIAL MOBILITY” (translation: give the above jobs to illegal immigrants working for slave wages under threat of forcible repatriation)
6) “CUT PUBLIC SPENDING – BUT BOOST INVESTMENT”(translation: destroy public health, schools, infrastructure and “invest” the money in the 1%’s multiple homes, nuclear bunkers and private planes)
7) “SHRINK PUBLIC SECTOR” (translation: make the above as permanent an arrangement as possible by selling off public assets at ridiculous rates to Macron’s banker chums )
8) “REDUCE NUMBER OF MPS” (translation: accelerate erosion of representative democracy)
9) “ESTABLISH EUROZONE GOVERNMENT”(translation:one step closer to global control)
10) “HIRE 10,000 MORE POLICE AND GENDARMES” (needs no translation – when you’re destroying people’s livelihoods and living standards you need a lot of men with guns to keep them quiet).

“Liberal left” now means extreme rightist ideas of social inequality, militarism and fascist social control that would have seemed grotesque to Thatcher and Reagan just thirty years ago. And the Guardian editorial staff is happy to promote it while still claiming to be a left-leaning paper.

Just make sure the only permitted opposition is a right-wing racist and you can quite easily persuade yourself you really are still that old hippy you used to be in college, even though you now support a globalist Rothschild banker who declares publicly his intention to create a new “socially mobile” slave class and the police state needed to keep it enslaved.

That’s how it works isn’t it guys?

Emmanuel Macron: An insider disguised as an outsider, wrapped in opportunism

Macron is the arch-establishment figure. Statements to the contrary are worse than misleading, they are lies.
Adam Garie
The Duran,
24 April, 2017

The French elections have made it easier than usual to spot fake news merchants. Anyone who calls Emmanuel Macron a ‘political outsider’ or ‘anti-establishment’ is telling a lie. That of course includes Macron himself.

Macron was the Minister of the Economy, Industry and Digital Affairs from 2014 to 2016. He was a member of Francois Hollande’s Socialist party during this time. Being a government minister under a President whose popularity was so low that he saved himself the embarrassment of seeking a second term, is as far from  being a political outsider as one could imagine. Only it gets worse.

Between 2004 and 2008 Macron worked in the French Ministry of Economy but then left in order to pursue work in the private sector.

To be specific, he left his government post to work as an investment banker at Rothschild & Cie Banque, a position which has about as much anti-establishment credibility as being Hillary Clinton’s speech writer, the EU President or the Prince of Wales.

Odd though it may have been for a Rothschild banker to be a member of the French Socialist Party, it is safe to say that Macron declared himself a proverbial Rothschild socialist in order to further his career.

But when Macron saw just how much President Hollande had tarnished the Socialist brand (so to speak) he jumped ship and started his own party ‘En Marche!’, a party which stands for the only thing Emmanuel Macron believes in….Emmanuel Macro.

Opportunism is par for the course in politics and Macron has mastered the art of both seizing and forging opportunities. But to call himself an ‘outsider’ when his CV includes being a government minister and working for the notorious Rothschild investment bank; he really must see the French people in much the same way Marie Antoinette did.

A vote for Macron is a vote for eating cake while he has his cake and eats it too. He is emblematic of a politician stooping to every known low in the book, even by French standards.

A vote for no one would be a more honest vote than a vote for Macron. As things stand, Marine Le Pen gives French voters an opportunity to redeem themselves in the eyes of the multi-polar world after years of hawkishness abroad and foppishness at home.