The Media Is Lying to You on Macedonia. US Is Backing an Illegal Coup D'état
You're protesting a US-sponsored coup in your country? Well then you're a xenophobe 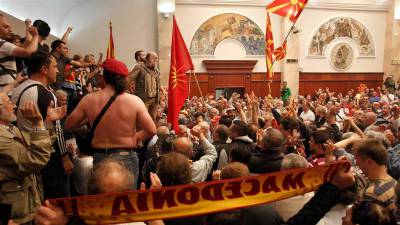 
Media narrative: Hateful protestors stormed the Macedonian parliament after an ethnic Albanian Talat Xhaferi was elected speaker for the first time.
Truth: Protestors stormed the parliament because Xhaferi was declared speaker in an illegal, unconstitutional manner as part of an ongoing coup d'état. It had nothing whatsoever to do with his ethnicity.
Even though Xhaferi was "elected" in an irregular manner, the US and EU have already stated they recognize his appointment. This now paves the way for ethnic Albanian parties and the smaller of two main Macedonian parties (Social Democrats) to proclaim a government without the constitutionally required go-ahead from the President of the Republic.
The latter has defied pressure from US and EU to allow the Social Democrats to form aminority government, without the relative winner of the elections the VMRO-DPMNE party, until their leaders drops his support for the Tirana Platform. The Tirana Platform is a Social Democrat pact with Macedonian Albanian parties drawn up in Tirana, Albania under the sponsorship of the Prime Minister of Albania, Edi Rama, to transform Macedonia into a bi-national Albanian and Macedonian state. Under the deal everything from the Macedonian flag, to its very name would have to be renegotiated with the Albanian ethnic minority.
Albanians already enjoy a status in Macedonia that Russians in Estonia and Latvia can only dream off. Their language is official where they form more than 20 percent of the population, and in Macedonia's political culture the relative winner of elections among Albanian parties is always invited to participate in the governing coalition. (However now the US and EU want to cut out the winning party among the majority Macedonians -- which the President is actually willing to do if only the losers, the Social Democrats, will drop the Tirana Platform.)