The Battle of Berkeley

The violence of fascist and nazi regimes of the 1930’s has been compared with the alt.right and with marine le Pen. 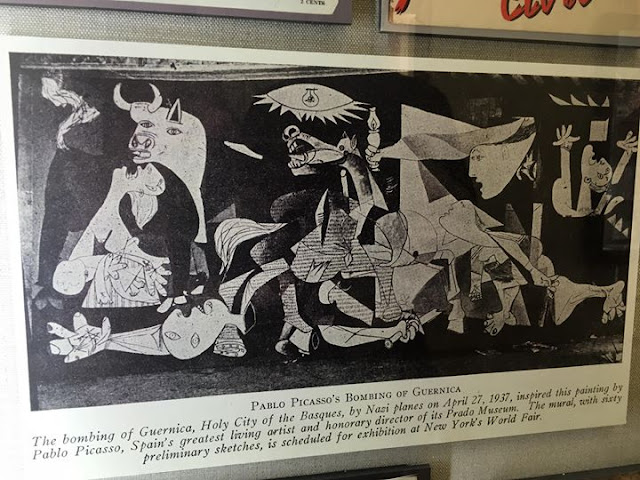 No free speech for endorsees of death and hate."

As I have expressed before I feel very uncomfortable with the loose definition of ‘fascist’ and the violence it is encouraging.

"Am I a fascist? How about Chris Hedges? How about my friends who have been assaulted by antifa types?

It's all good and well to say they're targeting fascists, but I know from direct personal experience that they simply label "fascist" anyone they disagree with, and then bingo, they've got carte blanche to shut up anyone who disagrees with them."

"The anarchists who have been attacking me and my friends have not been corporate thugs pretending to be anarchists.

They have been proudly declared anarchists. Their stated reasons include the fact that I believe that there are circumstances in which organized resistance is more effective than non-organized resistance (yes, really); and because I write books; and because I get paid for doing talks; and because I believe that women have the right to bathe, sleep, and organize free from the presence of males (I don't believe, for example, that females, including those who have been sexually assaulted by males, should be forced to share their most intimate and vulnerable spaces with males).

One friend was assaulted by antifa types because she doesn't believe that veganism will save the world. It goes on and on.

And for the record, your comment of saying you don't know the "context" of the death threats against me, the rape threats against my female comrades, the deplatforming, the assaults, implies that there would be some contexts in which it would be okay for these antifa types to threaten to rape my female comrades and threaten to murder all of us. What possible difference would context make? Do you know my work? Or am I an acceptable target for them? Seriously, in your mind, am I or am I not an acceptable target for them?

If so, i'll defriend you gladly, since I wouldn't want to be friends with someone who thinks it's okay for people to threaten to murder me and rape my female comrades (oh, i didn't mention they threatened to murder the children of my comrades too). If I'm NOT an acceptable target, how does that affect your analysis of the situation? What will you do to stop it? Will you still say it has to do with context?'

100s Of Cops Gather As Battle of Berkeley 3.0 Begins

Groups from across the political spectrum (from Bikers-for-Trump to Antifa) gathered in various spots across Berkeley this afternoon to protest/discuss the now-canceled Ann Coulter event. While events are peaceful for now,two antifa protesters have been arrested and 100s of police are on the scene.

As The Daily Cal reports, many community groups who had planned on protesting at Coulter’s appearance Thursday decided to continue their demonstrations, even though the event was canceled.


Raphael Kadaris, a member of Refuse Fascism, addressed onlookers at Sproul Plaza with a megaphone. “Anyone who cares about free speech should be worried there’s a fascist regime in the White House,” Kadaris said.

Some conservative groups also gathered to protest the cancellation of Coulter’s event. Lauren Southern, a conservative activist and writer, said she might read Coulter’s speech about 2 p.m. “I am here to defend free speech,” Southern said, “Show Antifa it is not their land, and violence will not be tolerated.”

Individuals entering Sproul Plaza may be subject to search for weapons, banners and explosive devices, according to a sign posted on a pillar outside of the Martin Luther King Jr. Student Union and UCPD Nixle alert released about 1:52 p.m. The alert declared Sproul Plaza an “event area” and advising the community that the area would have limited access.

Ann Coulter said Wednesday that she was forced to cancel her April 27 speaking event at the University of California, Berkeley amid concerns of violence but might still "swing by to say hello" to all her supporters.

"I'm not speaking. But I'm going to be near there, so I might swing by to say hello to my supporters who have flown in from all around the country," Coulter said in an email. "I thought I might stroll around the graveyard of the First Amendment."

Luke Rudkowski is live on the ground at UC Berkeley, California, covering the Free Speech Rally today. Ann Coulter was due to speak but has canceled her appearance over safety fears. The atmosphere is likely to heat up quickly between pro-Trump protesters and Antifa. Violence has become common place at these types of events and is no longer a shock.

The line up for today’s event:

Freedom Of Speech Lives On in Berkeley with or without @AnnCoulter We will not be shut down. We will not stay silent. Come join us tomorrow! 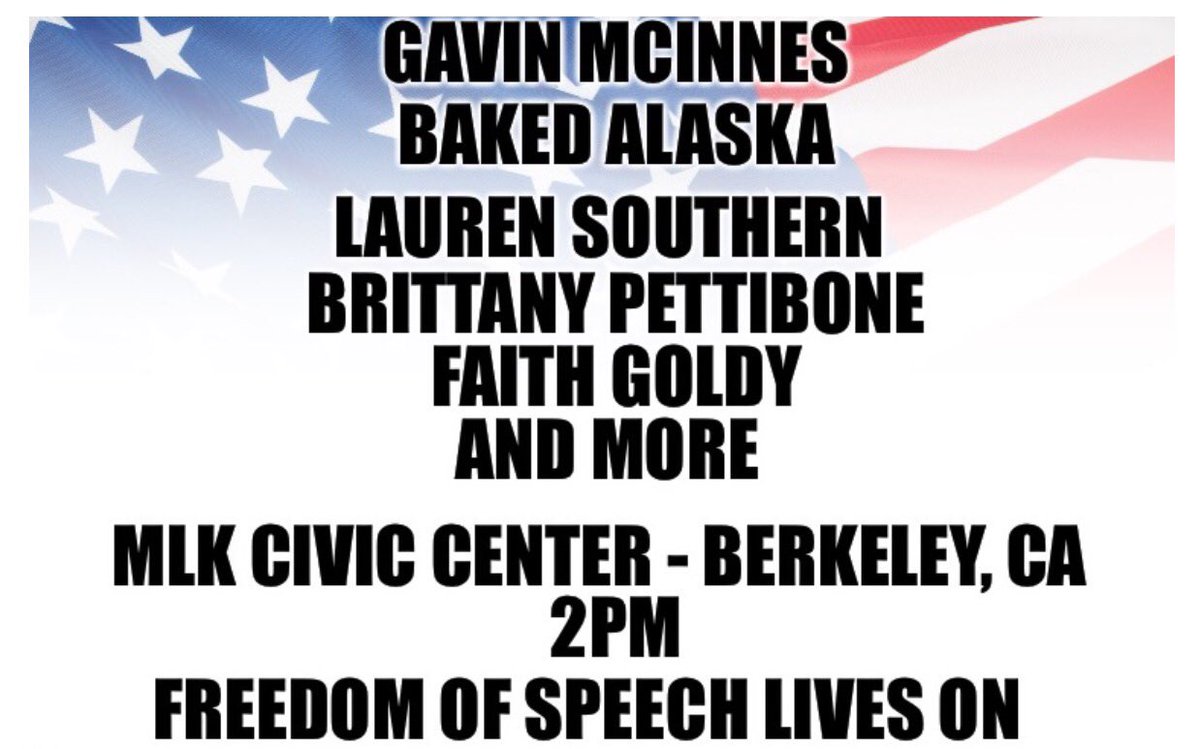 Gavin McInnes Retweeted Brittany Pettibone
We will all be reading from her speech. It's happening with or without her.
Gavin McInnes added,

Brittany PettiboneVerified account @BrittPettibone
Despite #AnnCoulter pulling out of Berkeley, we're still determined to show up and take a stand for free speech. Come join us!
10:35 AM - 27 Apr 2017

Early reports that 75-100 Antifa preparing to attack the free speech rally today in Berkeley
2:58 AM - 28 Apr 2017
With violence escalating at every next event, Luke puts out a warning on Twitter about the possibility of people bringing guns to today’s event.

There is online chatter from AntiFa discussing bringing guns to Berkeley today. I'll be there on the ground live on http://YouTube.com/WeAreChange 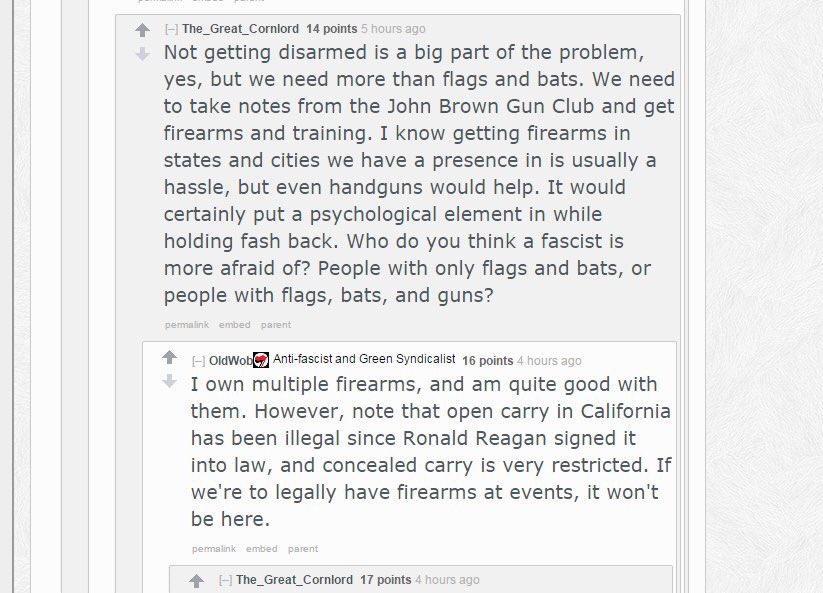 :20 AM - 28 Apr 2017 from Berkeley, CA Luke is correct in his assertion that protesters may be carrying glass bottles as weapons.
Luke Rudkowski‏Verified account @Lukewearechange

I really hope that AntiFa and the right wing protestors do not bring Heineken glass bottles to Berkeley today ugh
6:09 AM - 28 Apr 2017 from Berkeley, CA

#Antifa Moldylocks says she was attacked...but hmm, was she not throwing class bottles the whole time? Throwing bottles is why she got BTFO'


Bottles were seen on April 15th, the last time Luke went live on the ground at UC Berkeley.

A VIDEO TWEET POSTED BY BEVERLY HILLS ANTIFA‏ HAS BEEN QUOTED AND SHOWS ANTIFA MEMBERS DEMANDING PAYMENT FOR THEIR SERVICES. THE QUOTE READS: "ANTIFA DEMANDS GEORGE SOROS PAY US THE MONEY HE OWES. UNITE COMRADES AND FIGHT FOR $15/HOUR. #RESIST" 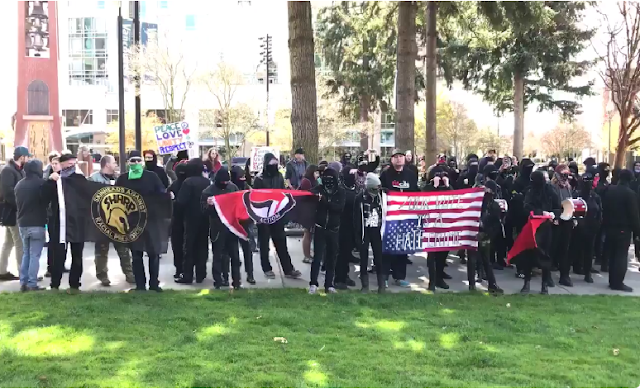 Posted by seemorerocks at 13:45